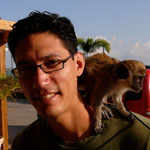 The collective odometer of Google's self-driving cars has just passed 300,000 miles. The engineering team celebrated with an announcement that they now feel the car has been proven safe enough for team members to ride the car in on their daily commutes. 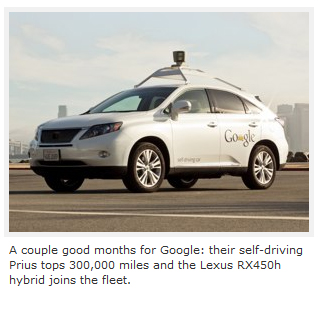 Google employees putting their safety where their mouths are and commuting daily could go a long way toward convincing the public that robotic cars are safe. Of course, the Mountain View, California area isn't the most arduous of terrains on which to test road worthiness. Acknowledging this, Google engineer, Chris Urmson, writes "... we'll need to master snow-covered roadways, interpret temporary construction signals and handle other tricky situations that many drivers encounter."

Until now the cars have been ridden with at least two people, but Google will allow their employees to ride solo during their commutes. As usual, control of the car can be taken over if deemed necessary by the passenger.

The self-driving car, as we all know, does not have a perfect driving record. About a year ago it made the news when it rear-ended another car. As it turns out, the accident was due to human error, occurring after the driver had taken over. And even though, as far as I know, the car had never gotten into an accident without the help of human-powered steering, safety concerns are always a concern. Here's a short video of Sebastian Thrun talking about the step-by-step progress it will take to get the car, once and for all, on the road.

Another milestone for Google -- and good news for those looking forward to cars more sporty than a Prius -- is their latest addition to the self-driving car fleet: the Lexus RX450h. Added to the family in the past few months, employees will use their commutes to fine-tune the driving algorithm for the Lexus.

In the United States, there were 10.8 million motor vehicle accidents in 2009 resulting in 36,000 deaths, according to the Census Bureau. When Sebastian Thrun announced Google's self-driving car program back in 2010, he said that robotic cars could possibly cut worldwide vehicle-related deaths by half. And while it's true the car remains untested in the more challenging conditions mentioned above, public resistance to giving up control at 60 mph could prove even more difficult terrain to cross. It will certainly be some time before Thrun's pronouncement is put to the test, but as Google employees start sharing their experiences on YouTube, PR progress could be just as important as the technical progress.