This post originally appeared on Slate.
By Jacob Covey


This is the third in a series of posts analyzing and celebrating typefaces. These posts were originally published by HiLobrow. 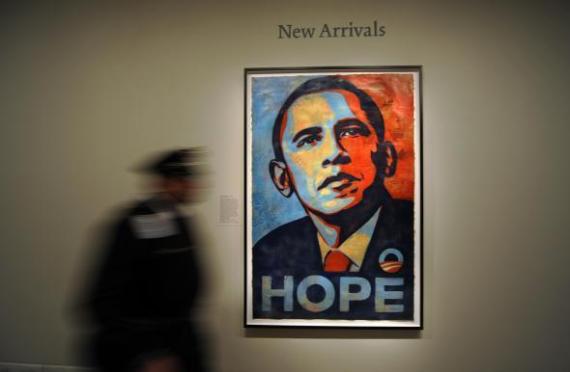 
Sans-serif type generates a lot of passion among graphic designers. While serif faces are defined by ornamentation, sans-serifs are specifically defined by what they are not. They aren’t serifed. They aren’t rooted in traditional ideas of lettering and calligraphic flourish. They are exercises in minimalism with nuanced turns and terminals. At its most histrionic, a sans face might have a lone bar (or “ear”) protruding from the lowercase “g” or a particularly unconventional question mark.

The sans as we know it has been around since the very late 18th century and the first forms were dubbed “grotesk” or “grotesque,” an appellation which reveals what people popularly thought of this homely new idea in letterforms. But with time many sans-serifs have become associated with major modernist movements in graphic design—most importantly, the 1920s Bauhaus aligning with the Geometric typeface Futura and the 1950s Swiss school with the Neo-Grotesque typeface Helvetica. There have been many hundreds of sans-serif families created, all revolving around this simplified framework and some dozen tend to be the same ones favorited by any given typesetter.

Very few faces become so ubiquitous as to define an era. Gotham is defining ours now. The most remarkable, flexible sans-serif family to be released in at least a generation, it has never aimed to align with lofty ideas. Although nostalgic, it is a sans-serif free of historical baggage. First appearing on newsstands as a commissioned font for Esquire magazine, it was introduced with A-list celebrity. It was later influential to the election of Barack Obama as the official typeface in his 2008 run (most notably set in blue at the bottom of Shepard Fairey’s “HOPE” poster), then reborn in a slab-serif for the 2012 election. And currently it feeds your Twitter page. You see it every time you watch a movie trailer.

With its variety of weights and families Gotham is practically peerless. Notably, it has narrower widths that allow for better legibility when set as text, taking it out of the realm of headline-only typefaces. (See Paul Rand’s “dogshit” comment about Helvetica care of Kyle Cooper.) It has a powerful presence yet it is approachable and even friendly, sharing similar roots to Futura. It manages the Futurists’ love of assertiveness and yet, too, the humanity of faces like Gill Sans without the bogus compromise of Humanism. (A typeset sans is not the domain of the calligraphic, for god’s sake.)

Certainly Gotham is overused and now inescapable but that only speaks to the rarity and strength of its character. Gotham’s creator, Tobias Frere-Jones, is an avatar of the creative type who blindly follows his muse; he will forever be tied to this accomplishment. His sad story of falling out with his longtime business partner only underscores the contemporary resonance of Gotham: These are grotesque times.