When President Obama took part in the recent CNN town hall on gun violence in America, he noted, "There's nothing else in our lives that we purchase where we don't try to make it a little safer if we can." It's a fact that in the United States, the federal government regulates every consumer product for health and safety, except for one: guns.

In fact, guns are specifically exempt from federal health and safety regulation. While the federal Bureau of Alcohol, Tobacco, Firearms and Explosives (ATF) is charged with enforcing the federal gun laws on the books, it lacks the health and safety powers routinely granted other federal regulatory agencies, such as standard setting, recall capability for defective products, and comprehensive data collection.

To understand how this contrast plays out in the real world, look no further than how we regulate motor vehicles. We've spent decades making improvements in vehicle and highway design to protect public safety. As a result, as President Obama said, "Traffic fatalities have gone down drastically during my lifetime." And while the actions of the federal National Highway Traffic Safety Administration have made motor vehicles safer, the gun industry has gone in the opposite direction: embracing heightened lethality as its driving force.

The graph below shows how motor vehicle deaths have steadily declined since 1999 while firearm deaths have gone up:

In 2014, there were more gun deaths than motor vehicle deaths in the following states: Alaska, Arizona, Colorado, Georgia, Idaho, Illinois, Indiana, Louisiana, Maryland, Michigan, Missouri, Nevada, New Hampshire, Ohio, Oregon, Pennsylvania, Tennessee, Utah, Vermont, Virginia, Washington, and the District of Columbia. A tally of the gun deaths and motor vehicle deaths in each of these states can be found below.

The data is from the Centers for Disease Control and Prevention's National Center for Injury Prevention and Control. Gun deaths include gun suicides, homicides, and fatal unintentional shootings; motor vehicle deaths include both occupants and pedestrians.

Proven, public health-based regulations for motor vehicles save tens of thousands of lives every year. It's well past time that we regulate firearms for health and safety -- just as we regulate all other consumer products.

Comprehensive regulation of the firearms industry and its products could include:

Below are the complete figures for states where gun deaths surpassed motor vehicle deaths. You can read our full report here. 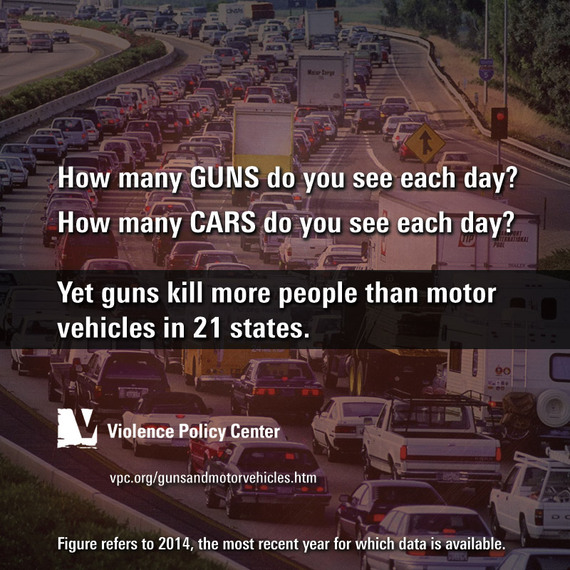 Republican Attacks On Joe Biden Over Ukraine Are A Confusing Mess