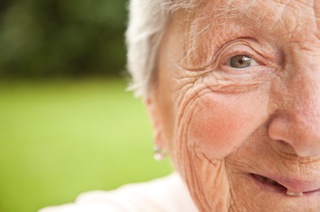 So what is it? One main determinant appears to be whether you have certain alleles. You can't change that (not yet anyway), but there are some things you can control. What you can affect -- and what appears to have a big effect on, or at least a strong association with, longevity -- are personality traits and characteristics. How you see the world. How you engage life. How you interact with others. Now, to be sure, many personality traits are somewhat out of your conscious control, whether genetically-determined or set in motion by events long past, but that doesn't mean you can't try to cultivate or emulate them.

What are some of these characteristics?

Perhaps one of the prime directives of the human is to be social. To have friends and loved ones upon whom you can lean when required or desired. I'm not necessarily talking about being the guy with a thousand Facebook friends who's out every night living it up, or even the lady who always runs into someone she knows when out and about. Socially connected simply means having meaningful relationships with other people. It could be 10, 20, or five. The point is that it helps to have actual, real friends and loved ones, and we're probably evolutionarily driven to want and make them because they provide a benefit to survival.

Why might social connections support longevity? The research is ongoing, but I can think of a few reasons. First, people with meaningful relationships can call on them for help in times of need and hardship. Need some rent money or to pay for an important surgical procedure? You can probably count on friends and family to help. Recovering from said surgical procedure and need someone to help you get groceries and cook? Call a friend or family member. Need a ride? Call someone you know. If you don't know anyone you can count on, your options will be limited.

Second, social isolation and loneliness are often associated with negative health patterns, like obesity, inactivity, and smoking. Plus, the socially isolated and lonely are more likely to have hypertension, elevated inflammatory markers, and increased blood clotting. In one study, people who had close friends in the same room with them had less of a blood pressure and heart rate increase in response to stress. Another study found that in people exposed to a cold virus, those with more social connections were less likely to actually get sick than those with fewer social connections.

According to health researchers Howard Friedman and Leslie Martin, conscientiousness is a big (perhaps the biggest) influence on longevity. Using data from a study that began in 1921 and followed a group of 1,500 boys and girls into old age and beyond, the two found that the kids who were "prudent, persistent, planful" went on to live the longest lives, while the "cheerful and optimistic" children lived shorter lives. The former group tended to take fewer risks, be more responsible about their health, and cultivate a better social network. They also had more satisfying and successful professional lives. Overall, the persistent, industrious, organized, and disciplined "facets of conscientiousness" were most strongly associated with longevity.

This connection is well-researched. Conscientious people tend to be healthier and take better care of themselves. Childhood conscientiousness is linked to better health later on in life. Most of the connection between conscientiousness and longevity can be explained by obvious factors, like the fact that thoughtful people are more likely to care about their diet and other health-related behaviors and therefore make better health-related decisions, but not all of it. Conscientiousness, for example, also seems to go hand in hand with cognitive function, and it may even be protective against Alzheimer's and other diseases of cognitive degeneration. Those who are conscientious may also deal with stress better than those who are not, probably by virtue of being better prepared for it.

There's got to be a balance, though, I'd imagine. What if conscientiousness veers into obsession? What if dedication to self-discipline devolves into self-flagellation? What if hard work becomes workaholicism and breaks up your marriage?

Don't Worry Too Much

Longer-lived people (and waterfowl) are able to let things slide off their backs. They tend to be easy going and don't get hung up on silly stuff as much. Consider the interplay with conscientiousness, however. Just as too much conscientiousness might manifest as obsessiveness and lead to poorer health and longevity, being too carefree might lead to poor decision-making and flagrant abuse of one's health. A balance is likely best, where you don't sweat the small stuff enough to heap unnecessary stress upon your back but take the important aspects of life seriously.

Seemingly contrary to the other findings about optimistic kids dying earlier, some research suggests that optimism is a good predictor of longevity. Optimists are more resistant to stress, generally lead longer and healthier lives than pessimists, and, well, optimism seems to be encoded into our genome. According to neuroscientist Tali Sharot, "optimism was selected by evolution precisely because, on balance, positive expectations enhance the odds of survival."

I wrote about this last year. Optimists, quite simply, are fighters. They're fighters because they can see a point to it all, a light glimmering at the end of the tunnel, and so they continue on. They don't give up, because why would you if things are going to work out? To an optimist, things only fail because you gave up on them. If you're faced with a cancer diagnosis -- say, lung cancer -- and you're an optimist, you're more likely to survive longer.

There's considerable research that ease of laughter is a strong predictor of longevity. He who laughs most, laughs last, in other words. Laughter isn't just enjoyable. It's also really good for you. It reduces stress and improves natural killer cell (a part of your immune system responsible for fighting cancer and other diseases) activity. It lowers cortisol. While growth hormone is best known for its fat-burning effects, it can also have a negative impact in rheumatoid arthritis; laughter reduces the RA-associated growth hormone increase. Overall, laughter simply has "positive, quantifiable effects on certain aspects of health."

In 2011, a study of older men and women found that those who were happiest throughout the day lived the longest. Interestingly, this association was independent of baseline health status or other variables, suggesting that momentary happiness "may be causally related to survival, or may be a marker of underlying biological, behavioral, or temperamental factors." Even those with chronic diseases saw longevity benefits from being happy.

I think this comes down to something very simple: Happy people have "something to live for." They have a reason to get out of bed in the morning. Yeah, yeah, a meaningful career, grandkids, a loving spouse, a faithful dog -- these are all good reasons to keep living. But when it comes down to it, if you can wake up confident in the fact that your day is going to be an enjoyable, happy one, you will live better and live longer.

Extraversion is a significant predictor of longevity, happiness, resistance to stress, and even mood regulation in the face of unpleasant situations. I tend to suspect that introverts might not live as long not because of something inherent to introverts, but because modern society is geared toward and favors extraversion. An introvert probably experiences more stress in response to social fundamentals, like job interviews, small talk, presentations, and anything else where extraversion helps. You can be introverted and completely comfortable with that fact and be totally fine, or at least minimize the downsides. But if you're an introvert who's unhappy, who's envious of extroverts, you may suffer.

I hope this was a helpful post and that you can begin cultivating some of these traits in your own lives. Be sure to leave a comment -- any good anecdotes about the personalities of long-lived people you've known?

Mark Sisson is a former elite marathoner and triathlete. He is the author of the best-selling health and fitness book The Primal Blueprint, and publisher of the health blog MarksDailyApple.com. Become a fan on Facebook and visit Mark's blog for daily health tips.