Cain checks in as the first choice of 27 percent of Republican voters in the poll, followed by former Massachusetts Gov. Mitt Romney at 23 percent and Perry at 16 percent. After those three, it’s Texas Rep. Ron Paul at 11 percent, former House Speaker Newt Gingrich at 8 percent, Bachmann at 5 percent and former Utah Gov. Jon Huntsman at 3 percent.

In the previous survey, conducted in late August, Perry led the field at 38 percent, Romney stood at 23 percent, while Cain was at only 5 percent.

Herman Cain leads the national Republican field of candidates for president, according to a new poll released Wednesday. But another poll released the same day and conducted over almost exactly the same field dates shows Cain still trailing Mitt Romney.

The poll that found Cain in the lead was conducted by Public Policy Polling, a Democratic firm that uses an automated phone call methodology, Oct. 7-10. It found Cain leading Mitt Romney by eight percentage points, 30 percent to 22 percent. Newt Gingrich followed with 15 percent and Rick Perry with 14 percent.

Casting doubt on the PPP results, though, was an Ipsos/Reuters poll released later in the day and conducted over similar field dates, which showed Romney still in the lead by four percentage points, with 23 percent to Cain's 19 percent. In that poll, Ron Paul followed with 13 percent and Rick Perry with 10 percent. That poll was conducted using live interviews, a more traditional survey methodology, Oct. 6-10.

Although the PPP poll is good news for Cain, most other national polls fielded since the beginning of October have shown Cain trailing Romney. The exceptions are the Zogby internet poll, which has consistently produced results far more favorable to Cain than any other national poll, and the Economist/YouGov poll, which also uses an internet panel. PPP's polls have also consistently shown Cain performing better than other national surveys have since he joined the race. The image below, created by political scientist and Pollster co-creator Charles Franklin, compares Cain's performance on PPP surveys to HuffPost Pollster's national trend estimate, which continues to show Cain lagging behind Romney by a 21 percent to 17 percent margin. 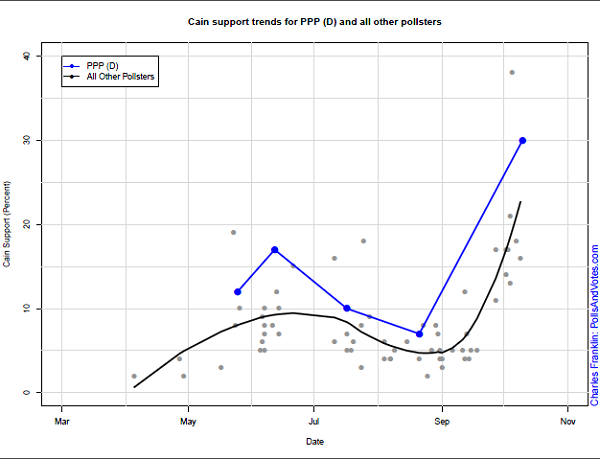 Two factors may help explain Cain's elevated performance in the PPP poll. First, a lower response rate associated with the automated methodology may result in a skew toward more politically engaged Republicans (who tend to be more supportive of Cain overall). Second, PPP’s implicit screen for likely voters may have a similar effect, defining the likely Republican electorate more narrowly than the other surveys.

The table below, showing Cain's performance relative to Romney on national GOP primary surveys, demonstrates that Cain performed most strongly in polls that sample likely voters and use non-traditional survey methodologies (IVR or internet panels) that could be more likely to reach the most politically engaged individuals.

Unfortunately, the high overlap between polls of likely voters and those using the non-traditional IVR or internet panel technologies means that it's difficult to tease out which might be the biggest culprit in the gap between the two groups of polls. However, a survey of Iowa released Tuesday by NBC News and Marist College and that both used live interviews and interviewed likely Republican caucus-goers failed to show the lead for Cain that PPP showed when they polled that state, suggesting that the automated methodology may have a greater effect than the likely voter screen.

Regardless of whether Cain's performance in the latest poll is a result of PPP's automated methodology, their likely voter model, or both, PPP is likely to be picking up a wave of positive sentiment for Cain among the most informed and engaged voters -- the ones who are most likely to vote (and to pass a likely voter screen this early in the election cycle) and the ones who are least likely to hang up on a voice recording asking political questions.

Along with Cain's strong performance in certain polls, other indications suggest that highly engaged Republicans are excited about him. Cain far outstrips any other Republican candidate in Gallup's "Positive Intensity Score," which purports to measure enthusiasm for each of the candidates by subtracting the percentage of Republicans who recognize the candidate who have a strongly unfavorable impression of the candidate from the percentage who say they have a strongly favorable opinion. In addition, the latest HuffPost/Patch Power Outsiders survey found that individuals identified as influential Republicans in Iowa, New Hampshire, and South Carolina are impressed by Cain, though perhaps wary of his inexperience.

That enthusiasm, whether or not it has propelled Cain into a national primary lead, has clearly impressed many Republicans, as Cain has made big gains even in polls where he does not lead. Although his support could quickly collapse, as Rick Perry's did, he is currently a force to be reckoned with in the GOP primary race.