During an ABC News-sponsored debate last spring in Philadelphia, Senator Hillary Clinton and even the debate's moderators made numerous charges against Senator Barack Obama. Analysts roundly panned the debate as a "gotcha" fest and devoid of substance. In a campaign appearance the next day talking about the debate, Obama reached over to his shoulders and made a motion to brush off any "dirt" that may have collected there as a result of the debates, a gesture borrowed from hip-hop artist Jay-Z. The potential President of the United States being willing and knowledgeable enough to reference a major hip-hop artist is significant, and helps explain why so many young people gravitate towards his him. Hip hop is the most dominant music in the world for youth and its influence on pop culture today is unmatched.

Obama's relationship with hip-hop is a reciprocal one. Over the course of his historic campaign, he has influenced the music even as it has continued to influence him. Though hip-hop artists have always rapped about social issues like poverty and police brutality, they typically shun electoral politics or political candidates. However, many of hip hop's brightest stars -- ranging from "underground" artists like Talib Kweli to the mainstream like Nas and Ludicrous -- have come out in support of Obama. Indeed, the last track on Nas's latest album is entitled, "Black President" whose chorus is a 2Pac sample of "Yes we can...change the world."

I wanted to understand why so many MCs have come out in support of a politician. I decided to go to the source and spoke with legendary hip hop pioneers -- Slick Rick, Biz Markie, and the group Whodini -- all of whom performed last night in Denver as part of the national convention festivities. They performed at a party thrown by an organization called "Party With a Purpose," which is holding a series of events this week at the DNC in attempts to link young people and politics through music.

"Obama is going to be the first black president, the first president of color in our melting pot society," stated Slick Rick, who considers himself a long-time Democrat. As one of the first MCs who started rhyming in the parks in New York, Slick helped form the foundation of hip-hop. Wearing his signature eye patch along with a prominent Obama button and gold chains, Slick named Obama's ability to "walk the walk with a genuine passion" as his most impressive attribute. 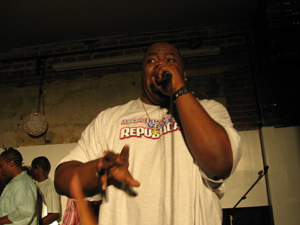 Performing for a crowd of mostly people of color under 45, Slick and others moved the room by interlacing hip-hop classics with affirmative messages for today's campaign. Party-goers -- who included an enthusiastic mix of celebrities, party activists and elected officials -- had an easy time singing along with the old school rhymes. Rapper Biz Markie lead the crowd in a rendition of his 1989 hit "Just a Friend," supplanting the original chorus with: "OBAMA you. You got what I need. You gonna be the president. You gonna be the president. OBAMA you..."

Bun B, a Houston-based MC with the group Whodini, told me that he had never seen so many people enlightened and galvanized. "I'm someone who people look up to and so it's important for me to show my involvement," Bun B said. He firmly believes that Obama gives all people, especially the disenfranchised, faith that change can happen. "[Obama's presidency] would open doors for everyone."

Connecting Obama with the potential success of the underrepresented was a common theme among party attendees and artsists alike. Saurabh Kikani, a hip-hop enthusiast and Obama supporter from California said, "Hip-hop has always been a youth-oriented music and was born out of poverty and the mass arsons that took place in black communities in the Bronx in the late 1970s. It has embraced Obama not just because he is a black candidate from the South side of Chicago, but he represents the type of success that hip-hop glorifies." Kikani then added that "the music is always about striving for something bigger and being the best at something whether it's DJing, MCing, or accumulating the most wealth. But the presidency is the ultimate symbol of success."

Ecstasy, also with the group Whodini told me with much pride, "Young black people, and children of color are always being told 'if you put your mind to it, you can become president.' Well, now it's for real! We can be the president!" 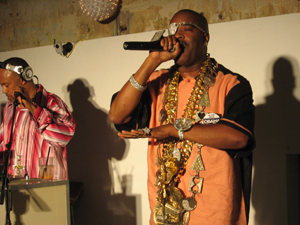 Chuck D once called hip hop, the "black CNN" and made sure to bring critical social and political issues into the music. But the influence of corporate music interests, especially in the 1990s, led to music that spun in a more materialistic, "mainstream" direction. It many ways, it parallels the shift of the Democratic Party to the center during the same period under Bill Clinton.

The movement Obama's campaign has generated is affecting not only the political system, but artistic mediums as well. "There are materialistic artists with genuine talent out there and Obama's movement is pushing them to get beyond the bling," Kikani further observed. "Ludicrous is a perfect example. Not too long ago he came out on the scene as a simple party rapper. Now to see the guy name dropping Obama and rapping about the Republican party and political change is something I never would have predicted."

Like a record spinning on a turntable, hip-hop is coming full circle. It was born out of oppression and the desire for the disenfranchised to express themselves. It is now reacting to the world around it and the freshness of the Obama campaign. It is bringing the beat back to its less materialistic and more socially engaged past and going a step further by entering the electoral process. That is what hip-hop does. It takes "samples" from the past, and creates something entirely new with them.

Jalil from Whodini summed up Obama's relationship to this moment of change for the country and for hip hop: "Same generation. Good music. Good politics. Good hip-hop. This is real hip-hop."