This week's Animal Oddity is all about the consequences of sex. In this case, turtle sex.

The story starts at New York's JFK Airport. Wednesday morning airport officials had to shut down a runway when a pilot reported large numbers of the shelled reptiles crawling about (to which I say good for him, since it would have been easier to just run them over). 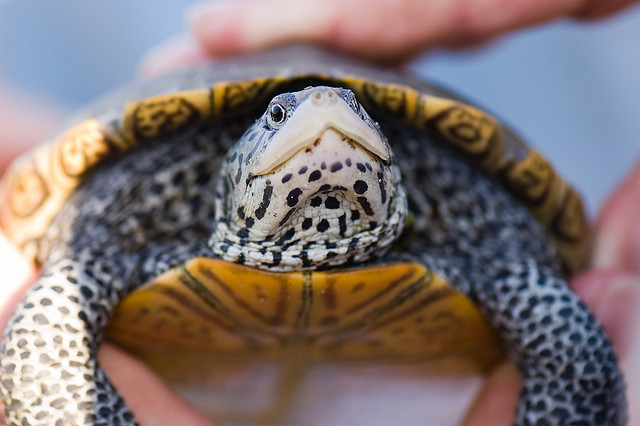 And that is exactly the habitat in which JFK Airport is found. So it should come as no surprise that 78 of them were collected off the runway, delaying flights for over an hour. It's mating season for the diamonback terrapins, leading airport officials to speculate that the turtles were out of the water seeking mates.

However, airport officials aren't naturalists and they probably misinterpreted what was actually happening. What's more likely is that all of the turtles collected off the runway were female terrapins emerging from the water to lay their eggs in the sandy soils adjacent to the runway. Diamondback terrapins mate in the water.

So while turtle sex is an important part of the story, it's the result of the sex that led to this odd (but not unprecedented) occurrence, not the act of sex itself.

Photo of diamonback terrapin by matmone via Flickr Creative Commons.