Everyone seems to have a bucket list these days. Whether it includes swimming with dolphins or finishing that home improvement project, buckets lists have become a way for the ordinary person to aspire to do something extraordinary, a way for the list makers to chase after dreams before kicking the bucket.

If I've learned anything since my divorce it's that life can change in an instant. The road you were mindlessly, comfortably following can abruptly end, forcing you to create a new path, not knowing if it will lead to another dead end or a trail lined with clarity and happiness.

So I decided to turn my "some days" into realities. I'm now no longer boasting about farfetched dreams I'd like to catch. Now I'm fulfilling a list of awesome, yet do-able activities that range from long term goals to one-time acts of bravery that satisfy my inner adrenaline junkie.

I'm far from finished with my bucket list, partly because every time I check off an item my resulting boost in confidence gives me ideas for new additions. But maybe that's what this divorce bucket list is actually about. It's not simply about doing cool stuff. Ultimately, it's about proving to myself that I'm capable of accomplishing things I once only dreamed of doing. And with those accomplishments comes a confidence that I will always figure out how to turn those dead ends into new paths lined with clarity and happiness.

So what's on my divorce bucket list? Here are 6 of my favorites:

I didn't realize it at the time, but running the Marine Corps Marathon a month before my divorce was finalized was the beginning of my bucket list. I intended to use the months of training to help me get through a tough time, but the 26.2 magnet on my car reminds me every day that it was actually my first step toward moving on with a new life.

At the unwise age of 14, I thought it was wise to get a tattoo of a broken heart on my tush. Fast forward over 20 years and many failed relationships, including my marriage, to the realization that I wanted that self-fulfilling prophecy gone. I'm currently on laser treatment number seven of at least ten, and as the tattoo slowly fades, so does my broken heart.

Being a writer, most people ask me if I've ever considered writing a book. "Of course," I'd reply. "I already have an entire novel written in my head." Well, I'm pretty sure no publisher is going to accept a manuscript with no words in it. Now I'm finally transferring that novel in my head to a novel on paper.

4. Learn to play the guitar

I always regretted quitting the drums in 7th grade just because the boys made fun of me and I hated being forced to wear a skirt in band performances. No quitting this time. I may not be able to play an entire recognizable song on the guitar yet, but I'm proud of my calluses. 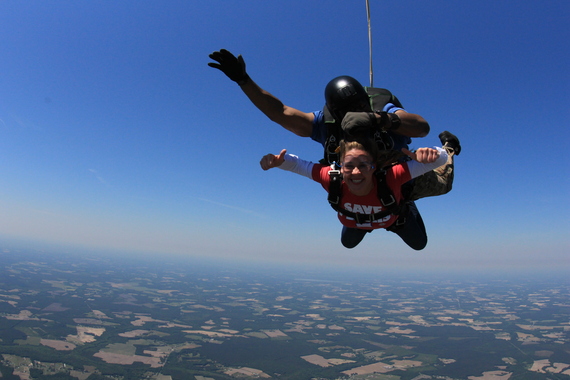 Jumping out of an airplane was terrifying and exhilarating and unforgettable. If I have the guts to sky dive, I can't imagine much else I can't muster up the courage to do.

6. Go on a solo vacation

My ex always planned our vacations, from where we went to what we did when we got there. I've always wanted to get on a plane and go somewhere by myself with my own agenda. So while my kids are with their father during the summers, I'm doing just that. This summer? Turks and Caicos. Next summer? The plan is to catch some live tennis at Wimbledon. But who knows. Maybe by next summer I'll be checking off completely different adventures on my new and improved bucket list.