It's not how you think... I promise. We haven't gone through an embittered divorce and I'm not so depressed that I've collected a menagerie of cats. Actually, it's a lot simpler. He began slowly turning me into a Crazy Cat Lady (from here on, CCL) by bringing two wonderful cats to our marriage. That's right, I brought two dogs and he brought two cats. Crazy talk in a country where most women have to convince their men that cats are okay, right?

Sure, volunteering with animal rescues and shelters for six or so years meant I had fostered a litter or two of kittens. All you need is a spare bathroom for the little balls of fluff and cuteness to live in and you're in business. But I had never fallen in LOVE.

This part was a slow burn for all involved. My husband's cats were daddy's girls in every sense. They took their time coming around to me, though I wanted them to love me from day one. Once they finally decided I wasn't so bad, they stopped hiding whenever my husband was gone, started willingly climbing into my lap for butt and chin scratches and began to sleep on my upturned back or stomach at night.

I knew I had been accepted. I came to love these girls as my own fur kids, and I'd like to think they love me back the same way as their human. Considering all things, I was at the very least an upgrade from their last human pseudo mom, who would get annoyed with them and lock them in the garage. Not cool. This CCL can't imagine a life without one of them insisting on sitting in my lap while I work all day, a happy, purring ball of LOVE. Granted that ball of love keeps walking on my keyboard, but thanks to spell check I'll survive.

Once our blended household settled, it was also established that I could only continue fostering if I were to foster litters of four or less kittens. After all, renting a smaller house equals no extra dogs and a smaller bathroom equals fewer kittens. This is where the true trouble began. With our first foster, my husband had the brilliant idea of allowing her out into the general population. I was resistant to this new existence, mostly because I was afraid our territorial cats would kill her. Fast forward to her being returned to the shelter for a successful adoption (with another family), and we now have around 50 photos and videos of this little kitten playing with our infant daughter and dogs. This trend continued with subsequent fosters, and I was hooked. 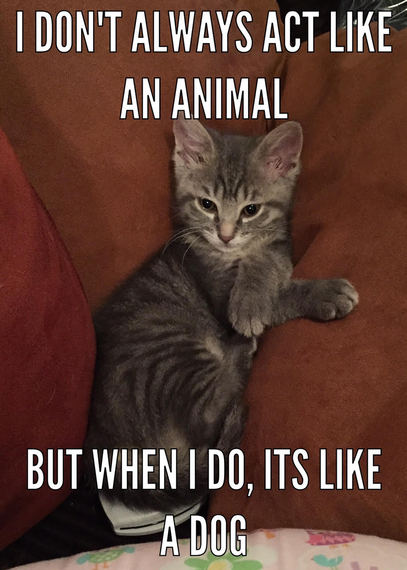 Not long after my CCL status was boosted by this change in dynamic, a chance meeting occurred with a group of people who have been working to fight for the welfare of Community Cats in a city in Virginia. What is a Community Cat, you ask? Well, Community Cats have also been described as wild, feral (Happy Feral Cat Day!), stray and abandoned. At times, they are viewed as a nuisance. They live in this strange, misunderstood gap.

They are neither pets nor wild animals. Some people want them all wiped out so the "problem" goes away and some believe they should all have homes where they are comfy lap cats. Others are in the middle, fighting against the grain (and sometimes against the law) to do what little they can for these cats until those who make the big decisions can, well, decide. The laws in place tend to support each end of the gap. For example, one is allowed to trap these cats, but if viewed as a wild animal and removed from the property, it must be euthanized. Or, if you feed the "nuisance feral cats", you will be charged with a misdemeanor and go to jail. That's right. If you try to take care of a cat, an animal who knows no better than to rely on the kindness of total strangers who care, you will go to jail. With laws like these in place, if you want to feed one of these cats legally, (though they most likely will not let you handle them) you must bring it home. 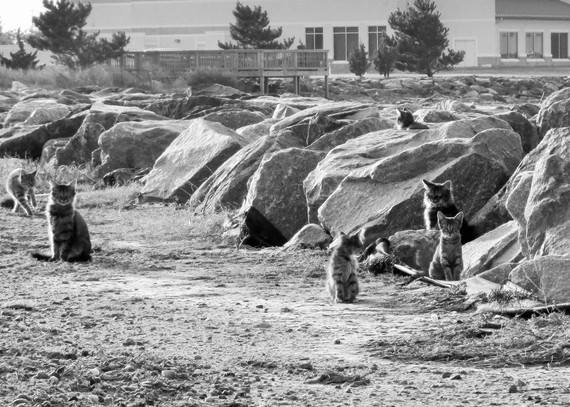 Recently, I attended an animal welfare conference and most everyone else there had chosen their "pet projects" to be the high visibility, popular hot button issues such as going vegan, factory farming and puppy mills. I, however, raised my hand (shyly at first, but eventually proudly) to declare that I wanted better laws for Community Cats. My CCL status became cemented, and official. I was that person standing in a crowd of people asking them all to pay attention to the unpopular, misunderstood, 300 pound gorilla in the room.

And so my journey continues in a world where no animal welfare advocacy group, no shelter, police department, politician, VIP in charge, NO ONE can come to an agreement on how to handle these precious lives. We are, slowly but surely, failing these animals. Some of us do clandestine things we cannot talk about. We catch kittens who desperately need help, and who might have a nearly guaranteed ticket to finding their forever home. 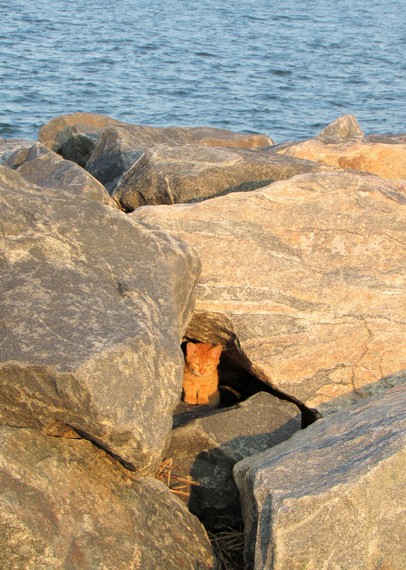 So far three such kittens have come through the doors of my home, received love, food, shelter and medical care (thanks to a local shelter) and two have gone back out to be adopted. One of them still lives in our bathroom, having lost his mom so soon that he refuses to give up eating from a bottle while his chances of survival are slim. I don't know about you, but tell me the chances a miracle will occur are slim and I will fight tooth and nail to make it happen. Tell me that I need to move a 300 pound gorilla to the front and center of the room because few others want to, and you have yourself my very first blog post.