Under new rules adopted by the Obama administration Friday, most Americans who want to go to Cuba can find a way to do so -- even though a series of laws restricting travel technically remain in effect.

Travel to Cuba for years has been restricted by laws preventing Americans from spending money on the communist island. In order to travel to Cuba legally, Americans were required to have permission for the U.S. Treasury’s Office of Foreign Assets Control.

The new regulations say travelers to Cuba no longer have to ask permission. Instead, the travelers should look over the rules and see if they qualify for one of 12 categories of travel permitted under a "general license."

Tourism for its own sake remains prohibited, but the policy makes it easier for Americans without family ties to travel to Cuba for a variety of reasons, including so-called “people-to-people” contacts -- a category of permitted travel based on the idea that exchanges between people from the two countries will strengthen Cuban civil society. Americans can also head to the island for religious purposes, to attend conferences or even for public performances or sporting events.

Most American travelers will still have to certify in writing that they have a valid reason to travel to Cuba under existing law and retain records proving that they fell under an exemption for five years, according to the Treasury Department. If the Office of Foreign Assets Control suspects someone of traveling to Cuba in violation of the rules published by the Treasury Department, that person could face an audit and fines.

“OFAC will enforce its sanctions and potential sanctions violations as they always have,” a Treasury Department spokesperson told The Huffington Post.

It remains to be seen, however, how rigorously the government will crack down on illegal travel to the island.

Last year, OFAC published on its website only one violation of the restrictions on Cuba that mentioned personal travel specifically -- a penalty of $89,775 against Red Bull North America, Inc., issued to settle a dispute over seven violations stemming from the filming of a documentary on the island without authorization in 2009.

It wasn’t clear, however, whether the agency's website listed all violations of the Cuba travel restrictions pursued by OFAC. The Treasury Department spokesperson told HuffPost that the agency cannot discuss cases of violations.

But Wayne Smith, a consultant at the Center for International Policy in Washington and a former chief of the U.S. Interests Section in Havana, said even before the rules were loosened it was rare for Americans to get punished for traveling illegally to Cuba. Dropping the requirement to request a specific license before traveling gives Americans even more latitude, Smith said.

“As far as the educational trips go, all you have to do is sign a piece of paper saying you’re going to learn about some aspect of Cuban life,” Smith told HuffPost. “It’s very easy. Virtually anyone who wants to travel to Cuba now can do so.”

But Ric Herrero of #CubaNow, a nongovernmental organization pushing for closer ties to the island, says the restrictions still have a chilling effect on travel.

“If you get caught, you get fined -- how that’s going to get enforced, we don’t know yet,” Herrero said. “I think the bigger issue here is that Americans should be able to travel wherever they want, and this gets us closer. Our travel policy toward Cuba is still more onerous than it is to practically any other country in the world.”

Geoff Thale, a program officer at the Washington Office on Latin America who has pushed for an end to the Cuba travel restrictions, called the changes “really great,” but likewise highlighted that most U.S. companies that organize trips to Cuba designed to pass muster with OFAC’s guidelines are expensive and rigid, making them unappealing to many potential travelers.

“You still have to travel with a group on a scheduled program of activities, so it’s not that Americans can just go to Cuba and do whatever they want,” Thale said. “I think this is a good thing and it’s essentially what the president promised to do, but it’s not an end to the travel ban.”

Ralph Baard, the vice president of customer experience of People to People Ambassador Programs, helps organize such programs. He said in recent days, he’s received several calls from eager travelers, not all of whom seem familiar with the rules.

“We’ve had a few inquiries, but honestly from what we’ve seen, it’s people who would like to go pop down for the weekend and just see what Cuba’s like,” Baard said. “One guy was interested in having a bachelor’s party down in Cuba. That’s definitely not permitted.”

If you’re wondering whether you qualify to travel to Cuba, here’s the list of acceptable categories of travel. For those without family ties to Cuba aiming to take advantage of the people-to-people category, the easiest way to ensure compliance is to use an agency experienced with organizing such trips.

Latino Voices Cuba Travel Cuba How To Travel To Cuba

Here's How To Travel To Cuba Without Getting Fined
Havana, Cuba 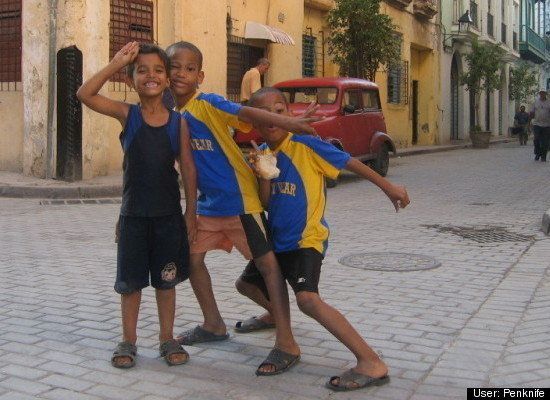