Tomorrow commemorates 10 years since the landfall of Hurricane Katrina. The article below is adapted from remarks that were delivered at an event hosted yesterday at Propeller, a New Orleans-based social enterprise incubator, in partnership with the U.S. Department of Commerce.

This is an important week in the life of the city of New Orleans. It is a time to remember the storm and the levee failures, a time to honor lives lost, and a time to pay our respects to this community's work over the last 10 years.

We are now a decade past the costliest natural disaster in American history. But it has been well documented that this was not merely a natural disaster. The levee breach was a man-made disaster, and it was anticipated. Leaders didn't heed the warnings, and they failed to act until it was too late.

A five-part series in The Times-Picayune, "Washing Away," warned of the risks of a major storm three years before the storm. So did a FEMA exercise conducted a year before Katrina hit. But unlike those simulations, the levees failed during Katrina without being overtopped by the storm surge. The American Society of Civil Engineers reported that "What is unique about the devastation that befell the New Orleans area from Hurricane Katrina -- compared to other natural disasters -- is that much of the destruction was the result of engineering and engineering-related policy failures."

Katrina's devastation was, by so many measures, due to the mistakes of people.

And the recovery is, by every measure, due to the strength of people. I know this because, as part of the first City Year corps in Louisiana, many of them became my friends.

Post-Katrina memories keep flashing through my mind this week, images of the objects of the storm. Building debris in the streets, in the trees, everywhere. Rusted, rotted out cars under I-10. Mold infected clothing and furniture. Curbside refrigerators wrapped up until they were picked up -- and that took months and months. Houses spray-painted by first responders with the iconic X. The number of bodies they found, tallied in the bottom quadrant.

Today, I think about three objects as memorials to honor our loss. First, a simple tape measure. After the levees failed, New Orleans's Broadmoor neighborhood took on over eight feet of standing water. This historic community became a growing pool of rotting sewage. Measure out eight feet. Place the tape measure against the wall of your home. There was a high of 98.2 degrees on August 30, 2005. Imagine your house underwater in that heat, with those smells.

The second object is a book I checked out from Broadmoor's newly rebuilt Rosa Keller Library, which has become a community focal point. In Decision Points, George W. Bush's autobiography, he wrote: "Just as Katrina was more than a hurricane, its impact was more than physical destruction. It eroded citizens' trust in their government. It exacerbated divisions in our society and politics." President Bush also said that Katrina was "one of the most disgusting moments of my presidency," that it was "a huge mistake" not to land in Louisiana after the storm, and that the photos taken of him aboard Air Force One made him look "detached and uncaring."

Our government failed New Orleanians. Before the storm, by not heeding warnings and not maintaining the levees. During the storm, with an inept response effort that a bipartisan congressional commission deemed "a failure of initiative" and "a failure of leadership." And after the storm, when the pace of recovery moved at the speed of a broken bureaucracy.

New Orleans came back, because of ideals that are antonyms to detached and uncaring, and daily actions that build trust, not erode it. But we haven't confused progress with success. We keep moving forward. And that brings me to the third object, a pile of papers I signed my name to a year ago. My wife and I bought our first home right here in Broadmoor. To me, these documents stand for something sacred: choosing to live in community.

A house becomes a loving home because of the actions of people in it. Likewise, rebuilding is not about the buildings. It's about the community, and ours came together in the toughest possible times. Many of our neighbors are heroes locally, and a decade later, they're rightfully being celebrated internationally as American heroes who showed "all of the resourcefulness, resilience and civic-mindedness that Americans can muster, even or especially when their government goes missing." 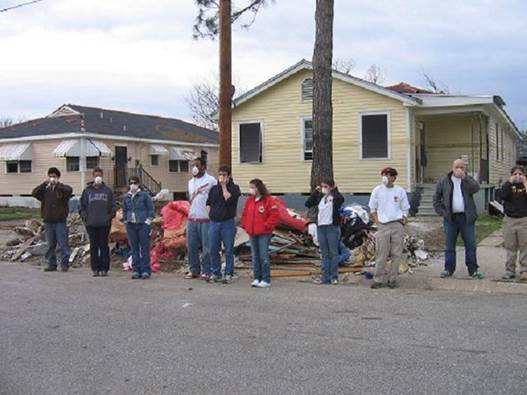 Their faces keep flashing into my mind this week, too. They taught me life lessons that will last a lifetime -- so many, in fact, that I believe everyone at that age should have a national service experience. That's why you won't find a stronger supporter of the Aspen Institute's Franklin Project. I think universal service should become a civic rite of passage for every young American.

I hope that anyone who is considering a service year of their own will consider a phrase that I heard often during my AmeriCorps experience: "If it were easy," they said, "everyone would do it."

They're totally wrong. It's not easy, and that's why everyone must do it. To me, there are three objectives of national service: being connected, being caring, and building character.

First, service means being connected to a community. National service is tough, and that's the whole point. A year of service will help you to understand diverse perspectives on difficult problems, and you will feel more connected than you ever imagined. Those kinds of experiences yield hard-earned, life-long lessons.

Second, service means caring for others. During your service year, you will be forced to question your own assumptions about what solutions might work. You will care about people's struggles that are unlike your own. You will value their life's work. And you will be humbled as you seek to achieve something bigger than yourself.

Third, service means building character for yourself. By living for others, you will help your community, and you will also help yourself by being pushed beyond where you're comfortable. In the social media era, instead of keeping up with the Kardashians, a service year provides a rare opportunity for quiet discernment. To build trust, you must also build character.

After the disastrous public policies and leadership failures pre- and post-Katrina, a community's resilience made American heroes out of everyday citizens. Working alongside them changed my life forever, and not only while I was serving. Today, where I live, what I do, and how I do it -- all of it -- is because I came to serve in a city I'd never visited before, which is now the community I call home.

Rob Lalka is a partner at Medora Ventures and the Director of Strategy and Partnerships at Propeller in New Orleans. He was a member of the founding corps of City Year Louisiana in 2006.