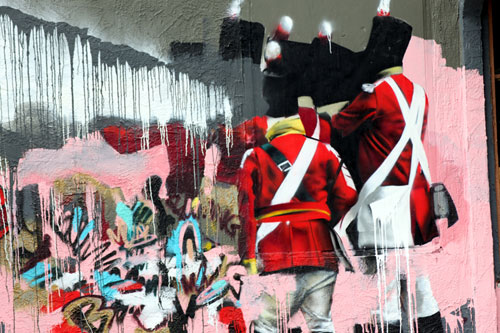 One reason we know so much about Street Art today is because we see images of it on the Internet.

Aside from blogs like ours that explore the Street Art scene in some depth, a virtual Flickr-atti of dedicated fans, artists, professional photogs, documentarians, and more casual snappers help spread the news all around the globe about this multi-lingual army of artists working in the public sphere.

Whether in Brooklyn, Berlin, or Bangalore, the unprecedented speedy growth of this global grassroots art movement can be directly traced to digital photography and the people behind the camera.

We asked three of today's active Street Art photographers; Luna Park, Becki Fuller and Stefan Kloo, to talk about their experiences and opinions to illuminate the relationship between Street Art and the photographers that document it. Together they have perhaps 25 years of shooting Street Art, thousands of miles on their kicks, and thousands of hours and dollars spent pursuing and presenting the explosion of Street Art that we have fallen in love with.

Brooklyn Street Art: Street Art has become very popular across the globe with websites, blogs, week-long festivals, installations, shows in galleries and exhibits in museums. Do you think your work has helped the artists and street art and its popularity?Becki Fuller: I think that photography -- regardless of whose it is -- has played an important and necessary role in growing the popularity of street art. If it weren't for photography, few of us would know much about what's going on outside of our immediate communities. It was because of photography that I became aware of what Os Gemeos were doing in Brazil, what A1one was doing in Iran, or what Know Hope was doing in Israel, as I have never been to those countries.

Then there is the ephemeral nature of most street art -- if you don't document it right away, there may never be a chance for anyone to see it again. 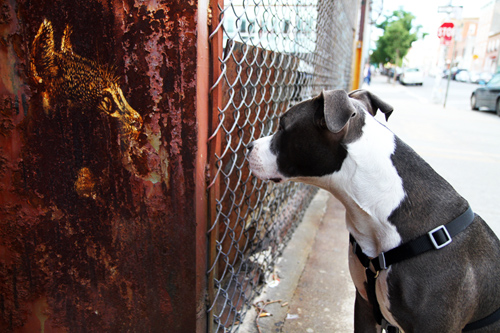 Luna Park:
While I am but one cog in the increasingly big wheel of international street art coverage, of course I'd like to think that my work has been meaningful and had an impact. I've been one of NYC street art's biggest cheerleaders for the past six years, making it my business to hunt down and present the best the scene has to offer in a timely fashion.

Stefan Kloo: Photographers are generally the first responders, reliable observers and quasi curators of the street galleries. The concerted effort to document the art by committed photographers must be an incentive to many artists, knowing that their work will have a much larger audience and longer shelf life. 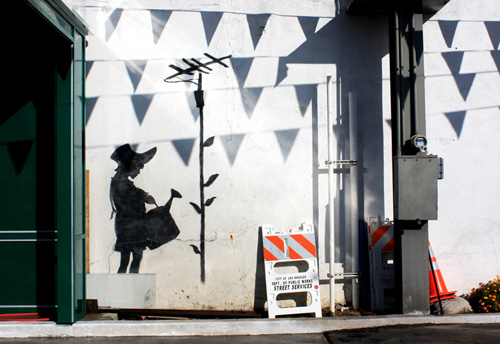 One of the UK's biggest exports, Street Artist Banksy, made a tour of North America this year. Street Art photographer Luna Park captures the play of shadow with this silhouette of a little girl (© Luna Park)

Brooklyn Street Art: Some art critics have suggested that Street Art enthusiasts, photographers in particular, lack an intellectual and artistic approach to the art that they document and are unable to truly understand Street Art. What's your opinion on this?

Becki Fuller: At the risk of sounding like a dolt, I don't think that it is necessary to intellectualize art in order to enjoy it. While a greater understanding of art can definitely enhance your appreciation, I believe that over intellectualizing art leads to a sterile and heartless environment. So I would counter than anyone who believes that you need a PhD in order to appreciate and understand street art probably doesn't know the first thing about really seeing street art in the first place.

Luna Park: Hogwash. To dismiss all street art photographers as unsophisticated fan boys is an unfair characterization and a gross oversimplification. We are as varied in our backgrounds and talents as the artists whose work we document. In discussing the quality of street art photography, one must differentiate between two issues: the work being documented and the photography itself.

Regarding the work being documented, street art photographers are uniquely positioned to recognize trends, chart artistic growth, and identify influences within our own particular street art microcosms.

While I'm an unabashed fan, I'm not uncritical. I walk past mediocre art on a daily basis; if it doesn't engage me, I don't waste time photographing it. If anything, I would say my taste in street art has become decidedly more refined over the years. 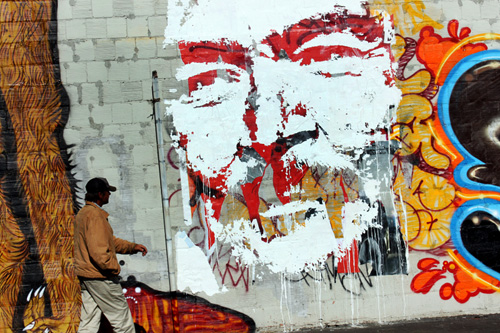 Stefan Kloo: That's rich ... and rather laughable. It's more the other way around -- the trained critic approaches street art mostly with the established criteria his academic training provides. That's only fair but won't buy you a drink. In street art it's about the raw authenticity, the creative kick and the unadulterated pleasure a grievously misguided act of vandalism can provide. If you can't grasp that a lot of it is simply about mixing things up, you probably should not get on that ride.

Street art represents a definite paradigm shift in the arts. It's just a very liberating kick in the ass of bourgeois attitudes towards anything and the arts in particular. Most critics fail to recognize that, and can't handle the rule-bending imposition street art represents. 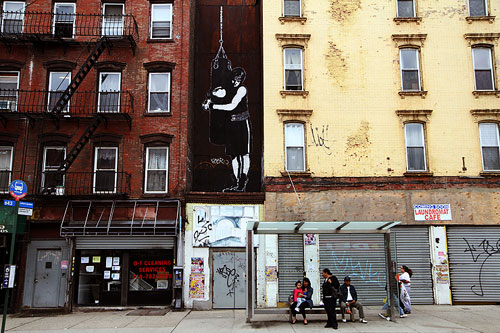 Brooklyn Street Art: There are many websites dedicated to showcasing street art around the world. Many people who run the sites take images and post them without permission or credit to the photographer. What is your opinion of this and should photographers take any action?

Becki Fuller: Honestly, it really pisses me off when artists or people who should know better do that ... I enjoy receiving a nod of recognition for my efforts as much as anyone anywhere does. I spend a lot of time, thought, and money doing what I do, often going into debt just to upgrade my camera or buy a new lens, all without receiving any monetary compensation. So to directly lift my image and treat it as if it is your own is a slap in the face, as far as I am concerned. 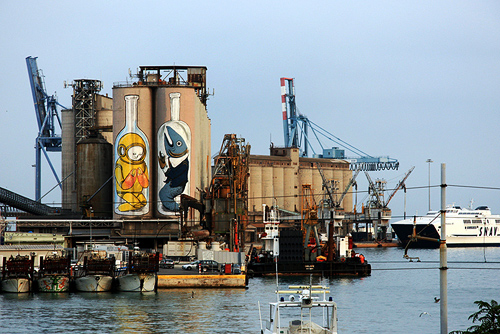 Luna Park: I realize that in putting things online, I open my work up to being stolen, but I still believe the benefits outweigh the risks. It's unfortunate, but there are unscrupulous sites that continue to post unaccredited photographs, including a few within the larger street art community. I am keenly aware of the pressure to break stories online, but not crediting your sources is just downright disrespectful.

I put a lot of effort into displaying work in the best possible light and always credit artists - it is unfathomable to me that some people think that photographs magically take themselves.

Stefan Kloo: That's a kick in the taco. You can't be happy about it. I'd like to think that we (street art aficionados) are among friends. We know what everybody brings to the table and if you're a dick about giving credit and just sponge off others efforts you're excluding yourself from that circle of a fairly closed group, that's your loss.

All photos courtesy of either Stefan Kloo, Becki Fuller, or Luna Park.

******************To read a more fullsome and expanded discussion and interview with these photographers go to BrooklynStreetArt.com "Street Art Photographers: Capturing Ephemera"