Chicago truly is an amazing theatre town -- especially now, where we have two epic plays receiving landmark productions, and I've been lucky to see both of them. Following the seven hour Angels in America at Court Theatre this weekend, I took in Goodman Theatre's highly anticipated The Iceman Cometh, which clocks in at just under five hours. Yes, with just two productions in the past week I've spent more than a half day in a theatre seat.

And, because competitions are fun, if I were to pit these epics against each together, I'd say Iceman slides ahead by a sliver -- mainly because Iceman's production grabs you by the throat and never lets go.

True, Angels may leave you empowered and ready to face life with rekindled fearlessness while Iceman makes you question if your life is a big delusional sham. But Euqene O'Neill's writing is so specific, uncompromising and sobering, such personal introspection is why we go to the theatre in the first place, right?

O'Neill's 1939 play, which is set in 1912, takes us into the grim Greenwich Village saloon and rooming house. A group of bleary drunken souls guzzle away the hours, raving, ranting, pointing blame for their current fates and taking turns passing out. Much like in Goodman's Camino Real, which preceded this production, we're watching hopeless folks stuck in a figurative purgatory. However, unlike Camino, these barflys aren't clawing to get out as they've already escaped, via the bottle.

The high point of their year is an annual visit from "Hickey" (Nathan Lane), a charismatic salesman who knows how to tie one on with the best of them. But this visit soon proves much different. Hickey has changed, and he wants his fairweather friends to change with him. Dissolve your pipe dreams! Don't put off to tomorrow what can be done today! And they don't take too kindly to this hard sell.

Director Robert Falls obviously gets O'Neill. This is a production with a clear point of view (highlighted by Kevin Depinet's perspective-skewing set). It crackles with uncompromising intensity. Even when the ensemble cast is passed out drunk in their broken down wooden chairs, you are drawn into this bleak, co-dependent world. You know these people. (Or at least I do. Which may say something about the company I keep.)

So, Lane. He's probably the reason most people will check out this production -- the curiosity factor. Can the funny-sounding musical comedy man do heavy drama? Why, of course he can. Lane is a hardworking actor. And, if anything, that's his roadblock here -- his hard work is in full display, particularly during his final revelation where Lane's inherent charm must be stripped away to show deep, disturbing vulnerability. While Lane isn't owning the role yet, I'd wager after some time in Hickey's shoes, Lane will be nothing short of revelatory.

Another big draw is Brian Dennehy, who has a long history teaming up with Falls and O'Neill -- and actually played Lane's role to great success under Falls' direction in 1990. Here, he plays Larry Slade, a former Syndicalist-Anarchist who's resigned himself to watching from the sidelines, and is perhaps Hickey's worthiest match. Cloaked in Merrily Murray-Walsh's ill-fitting rags, the broad-shouldered, square-jawed Dennehy resembles a once formidable man who's long thrown in the towel. And as Harry Hope, the saloon proprietor who hasn't stepped outside since his wife's death 20 years ago, Stephen Ouimette hauntingly captures a man stuck in his own grief.

The rest of this cast does fantastic work (I must call out a favorite Chicago actress of mine, Tara Sissom, who plays sassy streetwalker Pearl. With this production, Sissom makes the shift from scrappy storefront spaces to the fancy world of high-end equity theatre).

Following the jarring final blackout, I dare you to not take stock and evaluate what of your life you can control today. The iceman will be here before you know it, after all. Are you ready? 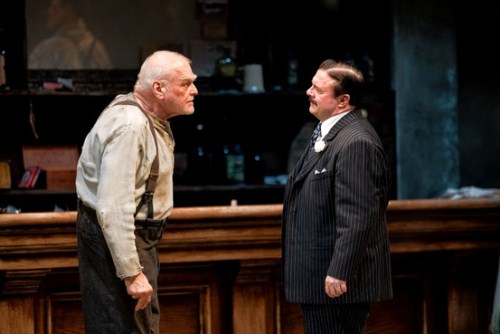