Yesterday, The Economist posted poll numbers on global attitudes towards torture, pulled from 2008 research conducted by World Public Opinion. The Economist notes: "Surprisingly, democracies are not necessarily more hostile to the practice than non-democracies. According to the polls, Americans are more willing to tolerate the use of torture than are Chinese." 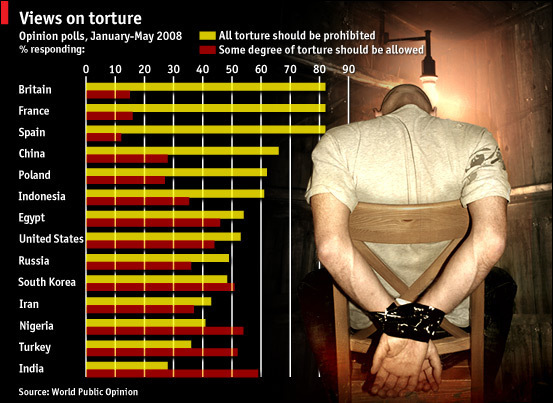 As you can see in the numbers presented, approximately 66% of Chinese polled reject the use of torture, as compared to approximately 53% of Americans.

It's great that The Economist is giving attention to this issue, but there are caveats. What doesn't show up in these numbers is that contemporaneous polls showed that significant numbers from all nations polled were willing to make exceptions for terrorists. Moreover, these are year-old numbers, and while World Public Opinion does not have updated global data, they have resurveyed American opinion on the matter, which were published this past June. In the interim, Americans opinion seemed to have shifted against torture, even in the case of terrorists:

Six in 10 Americans approve of having an international convention saying that "governments should never use physical torture" as a means of trying to get information, while 39 percent say such a ban is too restrictive, according to a new WorldPublicOpinion.org/Knowledge Networks poll.

A majority also opposes nearly all methods for coercing detainees to give information, even when it might be critical to stopping a terrorist attack against the US. Respondents were presented a scenario in which a detainee is being held who is likely to have "information about a possible terrorist attack on the US that may prove critical to stopping the attack." They were then presented a series of methods for coercing the respondent to reveal the information.

One method--sleep deprivation--received modest majority support (52%). Views were divided on putting a hood over a detainee's head for a long period of time, and bombarding the detainee with loud music. A very large majority (79%) favored offering detainees positive incentives for providing information.

Naturally, these numbers do still lag behind the previous polling of Chinese, but this is not in itself surprising. China has a long and continuing history of torture, which assuredly informs its people's opinions. American opinions on torture are largely shaped by the media, who have historically deployed a wide range of euphemisms -- "harsh questioning," "enhanced interrogation techniques" -- that obscure the issue. Naturally, those euphemisms only apply to actions taken by Americans. When the Chinese, or the Iranians torture somebody, the media uses the word "torture."

I'm just speculating here, but perhaps if we stopped using euphemisms that gloss over reality, Americans would appear in polls to be even more enlightened on human rights than the Chinese.