Over the past few days, around 600 West Papuan people have been reportedly arrested simply for peacefully demonstrating to call upon the Africa Caribbean Pacific (ACP) Summit to support West Papuan self-determination.

The Africa Caribbean Pacific (ACP) Summit being held in Port Moresby, Papua New Guinea is bringing together heads of state and other government representatives from around Africa, the Caribbean and the Pacific. We West Papuans are making our plea to the ACP as a cry for help because we are being brutally suppressed and silenced under Indonesian military occupation and colonialism. 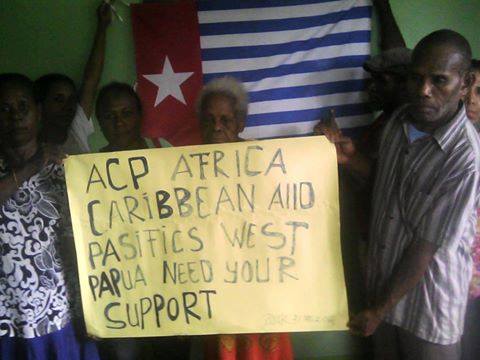 West Papuan elders hold up a message calling for the Africa Caribbean Pacific summit to support their calls for self-determination. May 31st 2016.

Across much of Africa, the Caribbean and the Pacific; colonialism has ended but in West Papua we continue to endure the horrors of colonialism and genocide with over half a million West Papuan people estimated to have been killed ever since West Papua was first occupied by Indonesia in 1963, and later illegally annexed after the fraudulent Act of NO Choice. Therefore we are calling on our Africa Caribbean and Pacific family to please support us in solidarity with our ongoing struggle against this brutal colonialism, racism and genocide. 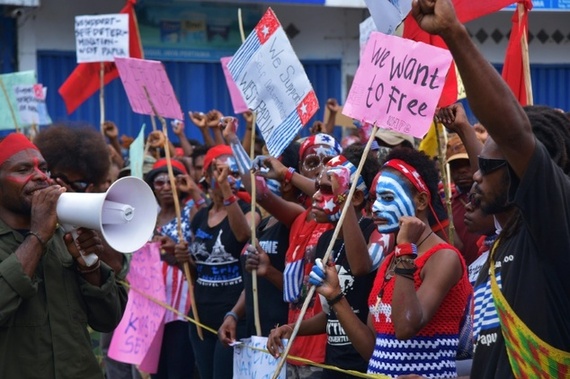 This week there were rallies held across West Papua as well as in several Indonesian cities as the people of West Papua took to the streets in our thousands to peacefully call for the ACP to support our fundamental right to self-determination as the Melanesian Spearhead Group (MSG) does. Demonstrations were held in many cities including: Port Numbay/Jayapura, Biak, Fakfak, Gorontalo, Jakarta, Manokwari, Nabire, Sorong, Timika, Wamena and Yahukimo. 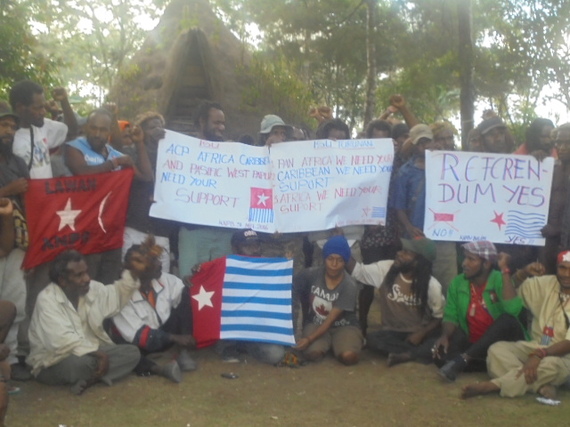 West Papuans in the highland town of Wamena send a message appealing for help to the international community. May 31st 2016.

However the Indonesian government is becoming increasingly scared of increasing international support for the people of West Papua and in an attempt to hide the real situation in West Papua, the Indonesian police arrested hundreds of people simply for joining these peaceful demonstrations. 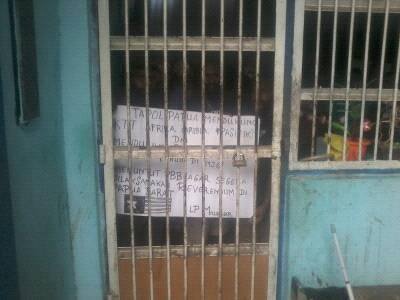 West Papuan political prisoners being held in a prison in Manokwari held up placards calling for international help. 31st May 2016

Therefore on behalf of my people I appeal to all human rights groups, the Africa Caribbean Pacific Group of States and the world to please join us in calling for their immediate release.It is not a crime to to peacefully call for international support for ones' fundamental rights. We West Papuans risk our extinction as a people in the next few decades if this illegal occupation and terrible genocide continues.

Please help to support the people of West Papua in our peaceful struggle for self-determination. We West Papuans desperately want and desperately need to be free like other members of the Africa Caribbean Pacific Group of States.

Benny Wenda is West Papua's independence leader, International Spokesman for the United Liberation Movement for West Papua (ULMWP) and founder of the Free West Papua Campaign. He has twice been nominated for the Nobel Peace Prize and lives in exile in the UK.

Benny Wenda is West Papua's independence leader, International Spokesman for the United Liberation Movement for West Papua (ULMWP) and founder of the Free West Papua Campaign. He lives in exile in the UK.