Just like every cocktail party peopled with artists, we ask the inevitable question, "What are you working on right now? What are you making?" The artist answers: 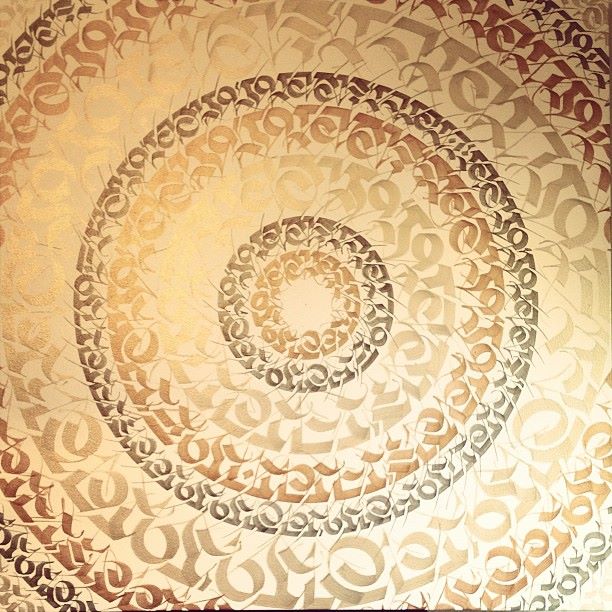 I just started on some new paintings, which I'm calling the, "Mantra Mandala Series." It's been an idea that I've been playing with for a while now, so it feels good to finally get it out. The design consists of concentric mantras of various sizes on a square canvas, which resemble a Buddhist Mandala. This was the main idea for the painting: to serve as a tool for meditation. I'll be showing a couple paintings at a benefit art show in Palm Springs and another at the Beyond Eden show in October.

I am currently working on a new series of scratched-photo drawings. I make photographs and then use a razor blade to scratch elaborate, representational drawings into their surfaces, so the plastic sheen of the photograph is interrupted with a fuzzy, bright white picture. Sometimes I paint over the scratching or scratch into the framing glass to create different effects, and add dimensionality to the drawing. I'm working toward an April 2014 show at Mark Moore Gallery in Culver City, but the work is, in general, about endings, and will be accompanied by a new fictional text that wanders through themes of nuclear holocaust, suicide and Antichrist horror movies, while taking jabs at the art word, especially art schools.

The images are "explosions" created with lens flair. They are very high contrast, so the edges of the images are a true black, with a bright circular area in the center of the frame that's more of a tinted white with bits of rainbow colors radiating from random areas. I'm drawing on these, with a razor, images such as crumbling architecture choked out by William Morris wallpaper patterns, or tree branches and rows of letter-forms presented as if they were seen through a kaleidoscope.

I've been making the scratched-photo drawings for about 10 years, and the process was developed in relation to my fiction writing, so the two things are twined in my mind. I wanted to find a way to add more of my own subjectivity to my photographs, to get at thoughts that might not be apparent from traditional photographic representation. I wanted my own subjectivity more concretely connected to the things depicted by photographs.

My name is Margaret Griffith, and I am originally from Winston Salem, North Carolina. I moved to Los Angeles after graduating from school with my MFA in Sculpture in 2002. I am currently making sculptures and drawings for a solo exhibition at Western Project in September, 2014, and I have recent work on display right now at Ventura College and at Andrew Shire Gallery in Los Angeles. My artwork consists of water jet-cut metal and hand-cut paper forms and drawings of gates that are part of a continuing series that I started about three years ago, when I participated in a show that required the work be off of the wall. 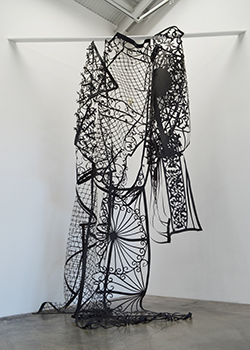 Previously I had been making drawings that were geometric, abstract and architectural (I went to grad school in Detroit so the abandoned buildings had a big impact on me.) While thinking about the off-the-wall show, I had an idea to photograph my neighbor's chain-link gate, cut it out of life-size paper and use the weight and curl of the paper to create a form in the shape of a tube that could stand up on its own. I liked the idea of taking something really heavy and permanent like chain-link and making it look fragile and delicate. The idea continued into hand-cut paper installations of gates that I photographed around my Highland Park neighborhood.
Last year I started making the gates out of metal and then curving, bending and twisting in a way that would transform the metal into a form that wasn't static or rigid, but gestural and more chaotic. I like finding metaphors in the urban landscape that can be used to talk about impermanence such a chain-link -- forms that are built as permanent and functional structures -- to protect and provide stability. I also interviewed people in the area and compiled an audio track about their gates and where they were from. I didn't grow up in a community with gates, and they are everywhere here: gates on fences, bars on windows, gates on driveways, etc.

The metal sculptures are hand-bent sheets of aluminum that are water jet-cut from computer drawings. Some have chain-link patterns, others have floral and geometric motifs. They are formed into organic and twisted pieces that are installed on the wall. I am also working on a free-standing floor piece. The paper installations are hand-drawn, cut and then installed in various ways: on the wall, in piles on the floor or hanging from beams. Some of the paper forms are simply paper-clipped together, as in the image I have attached of, "Coringa," (titled after the street Coringa). The drawings of the gates are at a very experimental stage and are made with aluminum foil on paper. They look like silver organic shapes with either chain-link or floral patterns that are twisted, flattened and glued onto a large sheets of drawing paper.

My name is Anthony Ausgang and I am a painter and author living and working in Los Angeles. My work is often referred to as lowbrow, and I paint mostly psychedelic cats floating around or doing everyday human things. I am currently working on a painting for a show in Tokyo. The curator asked for "a modern update of classic portrait painting," so I asked him if a portrait of a cat would be okay. That was not a problem so I've been a doing police booking "photograph" of a cat. The cat is holding a sign that reads, "Catfood Thief," in Japanese. It looks pretty good and I now I want to do a series of cat booking portraits, each one guilty of a different crime -- like, "Bird Killer," or, "Mouse Killer." 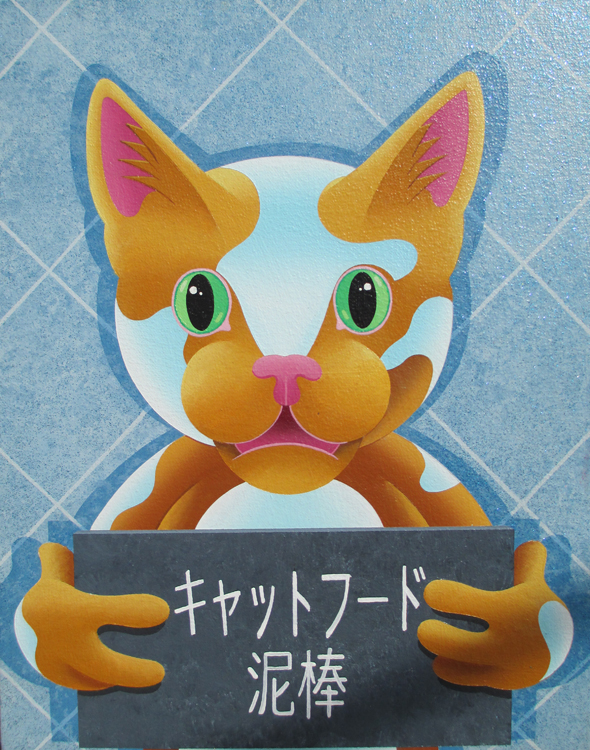 I tend to work on just one painting at a time; I find it difficult to split my loyalties. But I am currently working on my third novella and it is refreshing to me to write after a day of painting. I just released my second novella, The Pawnee Republican, a modern noir tale of destinies determined by spam emails. My readings from it have been well-received, and it is interesting to hold an audience for 30 minutes since people tend to look at paintings for less than five!

The last show in which I had work was the Kustom Kulture 2 exhibition at the Huntington Beach Art Center. The show examined hot rod automobiles and their influence on contemporary art, and it was very interesting to see if my painting could hold its own against an Ed Roth custom car. I'm here to say that I succeeded.

GORDY GRUNDY is a Los Angeles based artist and arts writer. His visual and literary work can be found here.