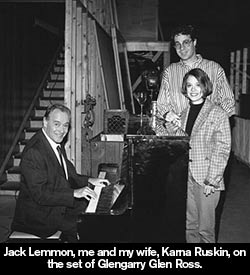 RICKY ROMA
Stocks, bonds, objects of art, real
estate. What are they?
(pause)
An opportunity. To what? To make
money? Perhaps. To lose money?
Perhaps. To "indulge" and to
"learn" about ourselves? Perhaps.

This is a quote from Al Pacino's character in Glengarry Glen Ross, released in 1992 and based on David Mamet's 1984 play that won the Pulitzer Prize. Now, I know that the fact that I co-produced Glengarry doesn't qualify me to comment on the economy, but I do know a thing or two about the movie business, as I've produced close to fifty movies and I run a worldwide film sales company. Lately, interest in movie investment has been piqued, given the recent challenges in the real estate and stock markets. In fact, some of my friends are saying things are so bad that they may as well be investing in the movie business. Let's look deeper at what seems just a humurous aside and ask ourselves the question, is investing in movies a good or bad idea? The answer is both, really. Of course, the biggest attraction is that it presents a unique opportunity to "indulge" and to "learn about ourselves" and maybe you make or lose money. However, I do believe there is a savvy, practical way to invest in the movie business. I've been in this business since 1985 and who have I seen make money time and again? The banks, naturally, because they position themselves to be paid back first.

Since the 2008 credit crunch we've seen the demise of over two-thirds of the entertainment lenders and those few that have remained have become even more conservative. And so from the ashes of the recession comes an opportunity. Where banks are contracting, where typical investments may have failed people, there is an opportunity to "indulge" in a business that seems to be recession proof, yet do so in a conservative and smart way, like the banks.

I often come across or I'm able to help assemble movies that are 70%, 80%, 90% financed by a combination of co-production deals, tax rebates, subsidies, deferments, production services and equity. If we believe we can sell a film effectively around the world, we see an opportunity there to make money by covering this gap, not to mention get worthwhile film productions over the budget hump. In the process, we get our money back in a first position and we get a gross position because we are the sales company working on commission. We can also fund against collateralized assets such as tax credits.

A few funds are beginning to crop-up in this area. Maybe we can help get some great films off the ground and in the process make money, or lose money, but certainly indulge and learn about ourselves. Right now, it beats the alternatives.