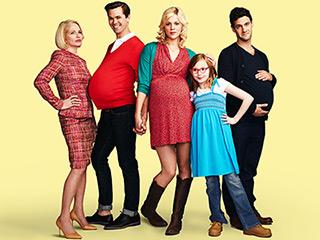 With little competition, gay showrunner Ryan Murphy (Popular, Glee, American Horror Story) has brought more LGBT characters to American primetime than perhaps any other industry executive in broadcasting. Already during his tenure in Hollywood Murphy has given airtime to several gay men, a few lesbians, at least three transgender folks, and a smattering of other unlabeled non-straight characters. But what is he doing, exactly? In creating shows that continuously push the sexual boundaries of a prudish broadcasting landscape, is he performing activism? Is he, in fact, pushing the boundaries? And if so, is he doing us any favors?

Murphy certainly has his fair share of critics: Conservative viewers were upset he was bringing "sexual deviance" into living rooms across America. Gay viewers were miffed that his shows seemed to trot in old and offensive stereotypes. Young bisexual viewers were devastated and alienated when Blaine, a character from Glee, had a "bisexual scare" that resulted in Murphy assuring the masses of pissed-off Tweeters that Blaine was "one of them" and not, in fact, a bisexual.

This season of Glee also saw the coming-out-lesbian storyline of Santana, who earlier had professed being uninterested in labels unless they were on something she shoplifts. Early viewers had celebrated Santana because she inhabited a more fluid sexual identity, one not gay or straight but somewhere in between. She became a model for a kind of unlabeled independence many Gleeks felt was missing from the show's rainbow of other identities. (Note: For them, Brittany is a caricature and not a character).

Also upset were lesbian viewers who were disappointed that in the sensitive moment of Santana's coming out and declaring her "true" not-a-phase lesbian identity, that she would then sing a song (Katy Perry's "I Kissed a Girl") that is all about straight women parading around in lesbian costumes in order to titillate straight men, namely Finn. 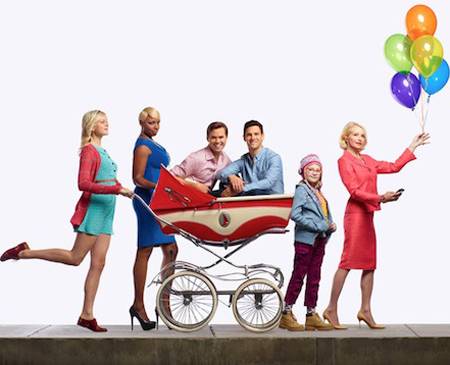 And that brings us to Murphy's newest endeavor, The New Normal, which premieres on Tuesday, Sept. 11, at 9:30/8:30c. The show features a well-adjusted, upper-middle-class gay couple who are prepared to drop copious amounts of money to acquire a baby. In the process they cross paths with a disillusioned Midwestern mother trying to make it in L.A. who will undoubtedly be referred to as their "oven." After viewing the pilot, I think the best review I can give of this show is that it will at once offend everyone as it offends no one. And it may become polemic in this, an election year with a supportive presidential candidate.

The New Normal made news a couple weeks ago when an NBC affiliate in Salt Lake City refused to air the new show stating that it is excessively "rude and crude" and that the scenes might be too explicit for the family hour. But there is little new about The New Normal ; it follows a classic (almost generic now) trend of pairing a flamboyant homosexual with a "normal" masculine gay man that both tames him and answers the question, "Who is the 'woman' in the relationship?" 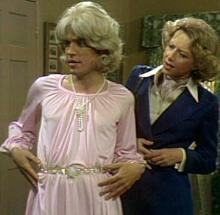 You can stretch this trend back to at least the late 1970s when Billy Crystal's "fruity" character Jodie Dallas dated a professional football player. We've seen it over and over again in the 35 years since.

What's more, there is little offensive about the homosexuality in The New Normal . Main characters Bryan (Andrew Rannells, of broadway fame) and David (Justin Bartha, The Hangover) are a committed, monogamous and (and thus) asexual couple that share only one brief kiss not unlike Cameron and Mitchell over at Modern Family, a show that Republicans apparently love. And they are single-minded in settling down and wanting to create a family. To be in the new normal, as outlined by the show, the traditions of love and marriage are only slightly edited but still upheld. In this new normality, straight society will be alright with you being gay as long as A) They don't have to bear witness to sexual acts (like holding hands or kissing) B) They still want the same things "everyone else" wants.

I just have to say: I think it's fantastic that we have a president who has come out in support of gay marriage, and I am grateful to have a first lady who can eloquently articulate that people should be able to love whomever they want to love. But both of these declarations put terms and conditions upon what kind of LGBT individuals we should tolerate and accept. "If gay people want monogamy, the white picket fence, the garage, the dog, and two and a half children, like any straight American dream, who are we to stand in their way?" they might say. This is a message I am at once glad gay advocates are working tirelessly to disseminate as I am disappointed by them. What about people who don't want those things - what about people who don't fit within categories like "gay" "bisexual" or "straight"? How does tying "gay rights" to marriage equality affect gay people who aren't able or desiring of this new normality? And who is advocating for them? Indeed, do shows like The New Normal further marginalize audiences who are not so easily labeled? I think that, yes, in fact they do.

Outside of all that, as a self-identified gay man, what concerned me about the episode is that, even if the show is trying to create an activist message (that loving gay couples should be able to have children), it does so in a cringe-worthy way. The couple decides they want a child after Bryan (the flamboyant one) is shopping and sees another family's baby as a shiny new object (I believe there's even a sparkling sound effect). For Bryan, having a child becomes another fad, a trend, the new "black" as it were, and he broaches the subject with his partner not unlike Veruca Salt's "I want it now!" approach from Willy Wonka and the Chocolate Factory. "Abnormal is the new normal!" he claims, taking his partner to a playground to show him a variety of other "non-traditional" families.

The show also features an updated Archie Bunker - a bigoted blonde Sarah-Palin-esque character (Ellen Barkin) who claims she's not homophobic because "a gay" keeps her hair perfectly coifed. Naturally, she hails from the Midwest, re-inscribing the heartland as America's closet while portraying the coasts as the place to escape homophobia.

As the show's audience, we are supposed to look at her and think, "What an idiot." But, as with any comedy, the problem with such a character in such a show is that she poses the danger of straight America laughing with her (with her homophobia) and not laughing at her (for her homophobia).

And lastly, and perhaps most importantly, it isn't funny. The gay jokes are trite - garden variety. A Cher ringtone and references to broadway can really only go so far at this point. And if they're not funny for me, who will they be funny for? Who is in on the joke and who is the butt of it?

At the end of the day, The New Normal is a good-intentioned albeit problematic show that should change its tagline to read: "If a straight family can have a Honey Boo Boo why can't we too?"

So: Is Ryan Murphy an activist? Is he doing anything different enough to be boycotted? Watch the pilot (already up on Hulu), leave a comment and let me know what you think.