Yes, you read it right; Israel was rated by expats as the most dynamic country in the world. It even left the USA and Brazil, countries widely known for their fast and energetic culture, far behind. I bet you were not expecting this, right?

Well, you are probably not the only one. Needless to say, the images we see on TV of conflict in the region do not give the impression of a dynamic country at all. However, this is only half of the story, according to expats living in Israel.

When you are planning a move abroad, the nature of the local population is an important factor to consider. This can vary drastically depending on what country or region you live in, and whether you are in an urban or rural environment. Your ability to settle in may depend heavily on how comfortable you feel in your new environment and culture. If you consider yourself to be a very rational person, not given much to displays of emotion or outbursts of passion, you might struggle to feel 'at home' in an openly emotional culture, for example.

Expats from all over the world were asked by InterNations, the largest network for people who work and live abroad, to give their perceptions of the local population in their respective destination. Survey participants were asked to rate whether they found their neighbors to be more traditional or dynamic, as well as, whether they tend to be more emotional or rational. The outcomes of this research can easily be examined through a series of psychographic positioning charts, based on several geographic regions. Israel's surprising result even surpasses the border of this chart! Keep in mind though, that these results are based entirely on the perception of the expats. It is quite possible that one person would view the local population as very traditional, whereas another person could see them at the other end of the spectrum. 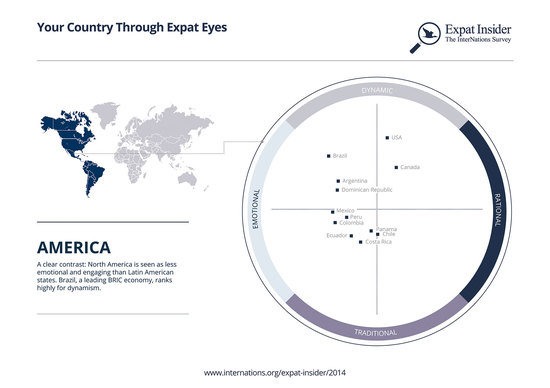 Israel was not the only country that stood out. Brazil, for example, which is one of the world's emerging markets, ranks almost as highly as the USA on the dynamic scale. Interestingly, however, no other member of the emerging BRIC countries (China, India and Russia) even came close to Brazil in terms of their perceived dynamism. If a dynamic environment is something that you value strongly, moving to Brazil or Israel might be the best option for you. 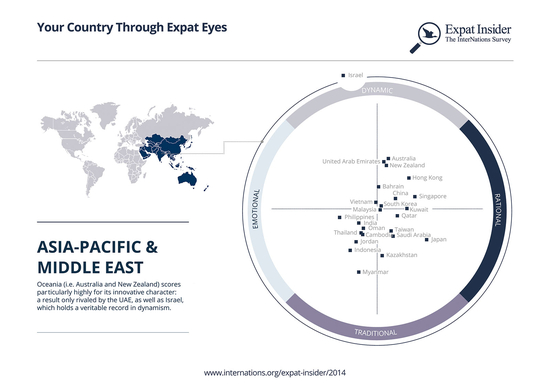 Across the Atlantic, the African continent shows an interesting divide. Most African countries are perceived by expats to be quite traditional, but Nigeria in the west, Kenya in the east, and South Africa on the cape distinguish themselves prominently by standing out for their dynamic development. This result might not come as a surprise, seeing as these three countries are indeed Africa's fastest-growing regional hubs. The diversity of Africa makes it an exciting destination for all kinds of expats. 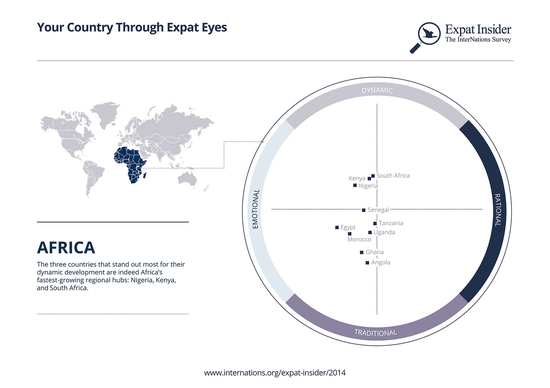 The results from the European continent offer nothing shocking: Expats perceive the north of Europe as more rational and distant and the south of Europe as more emotional and friendly. If you feel most comfortable surrounded by rational people, why not consider moving to the north of Europe? Germany, Switzerland, Norway and Finland might make you feel at home fast. Are you more an emotional person? Then, Spain or Greece may suit you better. This divide between the north and the south holds true for the American continent as well. 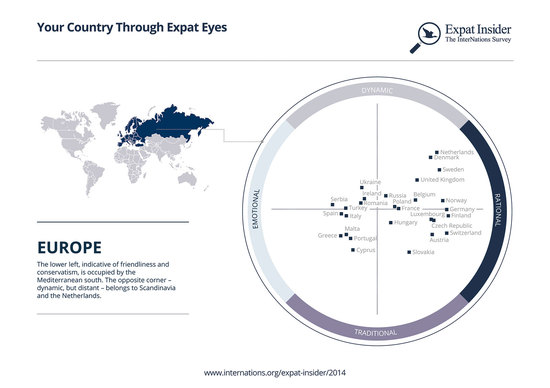 For those seeking a new home that highly values tradition, Myanmar could be a good fit for you since it is considered by expats to be the most traditional country in the world. Angola, Kazakhstan and Slovakia also saw high results in this regard.

The surprising outcomes of the study teach us to look beyond the stereotypes in our head and the images seen on TV. Preconceived notions are not something that you should take with you when you move abroad. These are not always correct and you will either be in for a pleasant surprise or a rude awakening when you get there. It is important, however, to research the place that you are moving to beforehand in order to familiarize yourself with the environment that you are about to step into. An easy way to do this is by searching for expat-related information on platforms such as the InterNations Guide Section. On the other hand, it is equally, if not more, important to keep an open mind and be willing to experience new things and broaden your horizons.