Brace yourself for some breathtaking botany. A group of scientists at the U.S. Department of Energy's Lawrence Berkeley National Laboratory are hard at work trying to perfect a process of artificial photosynthesis in an attempt to turn sunlight into useful substances--while simultaneously getting rid of nasty carbon dioxide. In other words, they want to do what plants and trees do... without the plants and trees.

The ambitious goal is to develop a real-world system that can capture carbon dioxide emissions before they vent into the atmosphere and then use solar energy to convert the CO2 into chemical products including biodegradable plastics, pharmaceutical drugs, and even liquid fuels.

How do they do it? With a system of tiny semiconducting silicon and titanium oxide nanowires and bacteria that mimics the natural photosynthetic process, in which plants use sunlight to synthesize carbohydrates from carbon dioxide and water. In the artificial model, however, the process synthesizes the combination of CO2 and water into acetate, a potentially valuable byproduct. 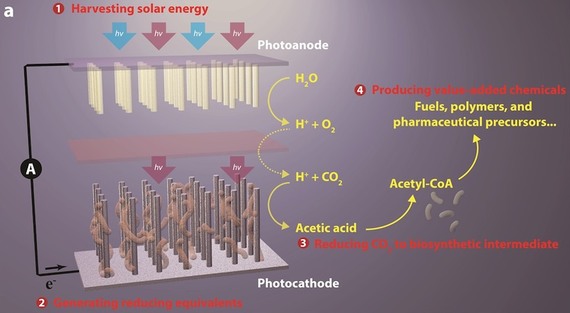 Peidong Yang, an inorganic chemist and one of the leaders of this study, said in a statement that, "Our system has the potential to fundamentally change the chemical and oil industry in that we can produce chemicals and fuels in a totally renewable way, rather than extracting them from deep below the ground."

In natural photosynthesis, leaves harvest solar energy and carbon dioxide is reduced and combined with water to form biomass. In the artificial system, the nanowires harvest solar energy and deliver electrons to Sporomusa ovata bacteria that produce enzymes that selectively catalyze the reduction of carbon dioxide. The resulting substance is combined with water for the synthesis of the useful acetate, and genetically engineered E.coli bacteria is used to synthesize targeted chemical products.

In experiments, the team achieved a solar energy conversion efficiency of up to 0.38 percent for about 200 hours under simulated sunlight, which the scientists say is about the same as that of an actual leaf. Their next goal is to hit a conversion efficiency of three percent, but they will need to get to 10 percent in a cost-effective manner to make the technology commercially viable.

Target chemical molecules that have emerged from the process include butanol, a fuel comparable to gasoline; amorphadiene, a precursor to the anti-malaria drug artemisinin; and the biodegradable plastic PHB. 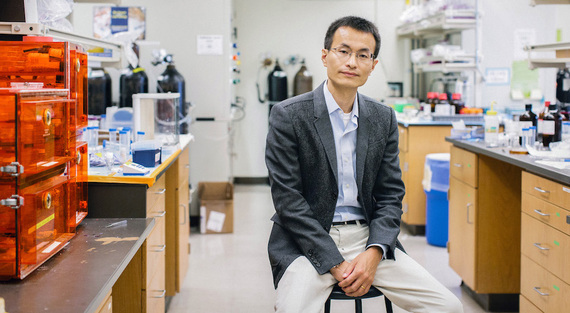 Peidong Yang and his collaborators have created a synthetic "leaf" that is a hybrid system of semiconducting nanowires and bacteria. (Source: John D. & Catherine T. MacArthur Foundation)

Can we really hope to turn air pollution into fuel and useful pharmaceuticals? It's probably a long journey from here to there, but the work is already garnering a fair amount of attention. In fact, Yang was awarded a $625,000 "genius" fellowship by the MacArthur Foundation last month.

"The feasibility of artificial photosynthesis has been demonstrated based on our earlier experiments," Yang told the Los Angeles Times. "We just need to keep pushing this research frontier."