If you've gone to the movies to see a full-length animated feature in recent years, chances are it was produced and distributed by Disney, Pixar, or Dreamworks. Animated features such as A Town Called Panic, My Dog Tulip, or Legend of the Guardians: The Owls of Ga'Hoole have not been accompanied by the kind of spinoff marketing campaigns that include toys and tie-ins with fast-food restaurant chains.

That doesn't mean that independent animated features have a lesser artistic vision; it just means that they stand a smaller chance of dominating box office receipts on their opening weekend. Three independent full-length animation features have such strong storytelling techniques, such brilliant artwork, and such quirky appeal that they should not be overlooked.

* * * * * * * * *
Sometimes an animated film captures your heart through the sheer beauty of its artwork. Such is the case with Michel Ocelot's Azur et Asmar: The Princes' Quest . 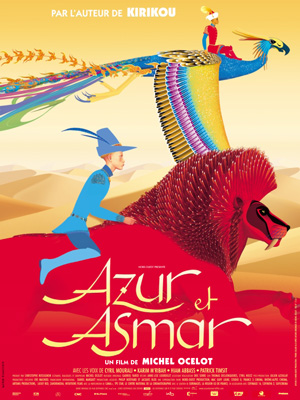 Azur (the blonde, blue-eyed son of a noblewoman) and Asmar (the dark skinned, dark-eyed child of Azur's nurse) have been nursed in infancy by the same woman. As kids they played, fought, and loved each other as brothers do. As grown ups, they eventually became rivals. 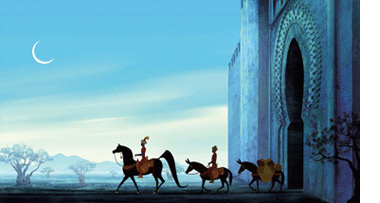 Years later, when Azur is haunted by memories of the legendary Djinn-fairy, he travels to Asmar's homeland to find her. Once reunited, he discovers that she has become a successful merchant while Asmar (who also longs to find the Djinn fairy ) has become a member of the royal guard.

Only one of the two young man can succeed in his quest. 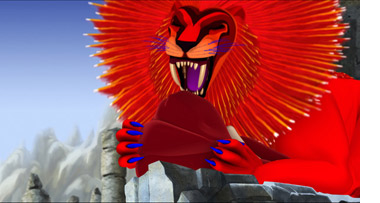 As you watch the following trailer, you'll notice the breathtaking beauty of Ocelot's art. Add in a musical score with a strong Middle Eastern influence and you'll discover an animated feature with a rare level of exoticism.

Written, designed and directed by Adam Elliot, Mary and Max features the voices of Toni Collette as a young Australian meeskite and Philip Seymour Hoffman as an obese, New York Jew with Asperger's syndrome. Narrated by Australia's Barry Humphries, this film deserves a special award for the best use of Puccini's humming chorus from Madama Butterfly.

It took me all of five seconds to fall head over heels in love with Mary and Max. If you took the most hopelessly morbid insecurities of Jules Feiffer and Woody Allen, brought them to life through the process of claymation, and imbued them with the bleakly sardonic sensitivities of Tim Burton and Charles Addams, you'd get some idea of the dry wit and comic gold awaiting audiences who see this movie. 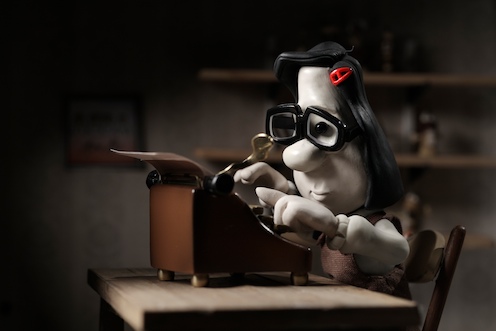 The heroine, Mary Daisy Dinkle, is described as having eyes the color of muddy puddles and a birthmark the color of poo. Her mother, Lorraine Vera Dinkle, is addicted to cooking sherry, smoking cigarettes, and has a nasty habit of "borrowing" items from the supermarket by hiding them up her dress (she once got a frozen package of fishsticks stuck to her bra).

Mary's father has spent most of his life working at a teabag factory and pursuing his love of amateur taxidermy. She has a crush on her neighbor (Damian Cyril Popodopolous), who has a severe stutter and hopes to become either an actor or a cake decorator. Living across the street is an old man in a wheelchair who suffers from agorophobia.

One day, Mary decides to write to a complete stranger to find out how babies are born in America. Randomly choosing a name from the New York phone book, she begins a pen pal relationship with Max, whose multiple neuroses could make Woody Allen seem overly self confident. Although Max often finds solace in talking to his invisible friend, Mr. Ravioli, he and Mary share a love of chocolates (as well as an Australian cartoon show) that brings them closer and closer over the course of the next two decades. 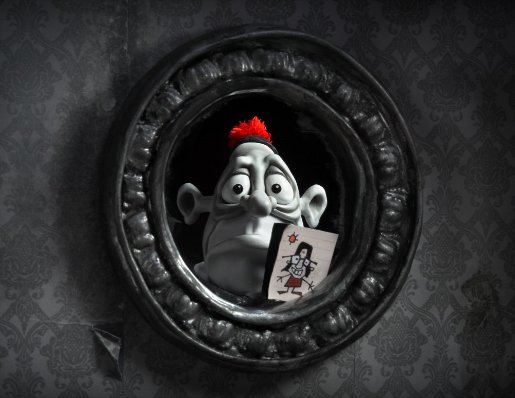 Elliot's full-length feature is a masterpiece of animation that includes everything from the snarkiest kind of gallows humor to the funniest death of a mime ever caught onscreen. It's hard for me to accurately convey the beauty of Elliot's story, the drollness of his script, the visual charm of his artwork, or the twisted kind of neurotic Jewish tenderness conveyed in his film. You really have to see it to believe it. I can assure you that, once you do, you will love Mary and Max unconditionally. Here's the trailer:


Nina Paley spent five years single-handedly animating Sita Sings The Blues on her home computer as part of a personal quest to write and produce what she has subtitled "The Greatest Break-up Story Ever Told." Loosely adapted from the Ramayana, her film is an absolutely breathtaking piece of animation art.

What sets Sita Sings The Blues apart, however, is its obvious mix of cultures and cultural icons. The story begins in San Francisco, where a young couple with a particularly rowdy housecat finds their relationship threatened when Nina's husband receives a contract to go work in India (in 2002, Paley followed her then-husband to Trivandrum, India, where she was first exposed to the Ramayana).

As the young couple's relationship suffers increasing stress and alienation, the heroine becomes fascinated with the tales of the Ramayana, especially the tale of Sita's abduction from her beloved Lord and husband (Rama) by the demon Ravana, king of modern-day Sri Lanka. Using different styles of animation for the modern story of how Nina's husband dumped her by email and how Rama and Sita's relationship was challenged by Ravana, Paley also employs a group of characters based on Sri Lankan cut-out silhouette figures to act as a set of nosy neighbors who offer catty comments on Sita and everyone else in the plot. 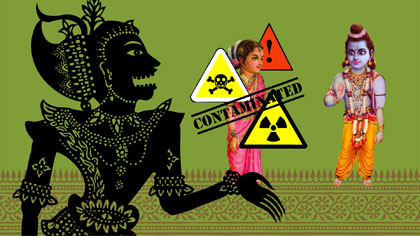 In Paley's film, the ripe and curvaceous Sita looks like a cartoon combination of an Indian princess and Betty Boop. What takes her film to an entirely new level, however, is Paley's use of a group of Jazz-era recordings by songstress Annette Hanshaw which add great merriment to the proceedings. Watching an increasingly pregnant Sita turn deeper shades of blue to Hanshaw's warbling of 1929's hit song "Am I Blue?" will have you laughing your head off.

The sheer beauty, wild inventiveness, and feisty humor of Paley's animation (including a wildly funny two-minute "Intermission" segment) rivals anything put out by Pixar and Disney. As I watched her film, I kept pinching myself to see if it was possible that I could simply be having too much fun.

Because Paley ran into licensing problems for the music she used in Sita Sings The Blues, she was unable to sell the DVD. However, viewers can watch it online or download the film for free by clicking here (a donation is highly recommended). In the meantime, you can get a sense of the film's many charms in the following trailer: