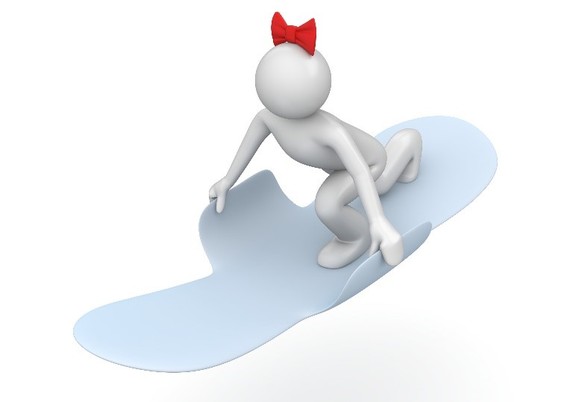 It didn't take 28 days for the political circus to get bloody awful. Two days after a televised debate, a male candidate for president insulted a feisty female news reporter by subtly remarking that she must be on her period. If our Founding Fathers had foreseen such ugly stains on their fertile new country, they would have grabbed the first protective vessel back to the motherland of England.

Men can get away with belching contests, lighting farts, and peeing on the golf course. Women bleed every month for 40 years and suffer from moodiness, cramps, bloating, and pain. Now their professionalism is questioned if they dare to be assertive. Personally, I'd rather trade activities with the men.

Polite and proper society never discusses menstruation, even though millions of women are having their periods right now. It's rarely portrayed in books, movies, or television shows, as if the natural phenomenon is too bloody awful to handle. Can you imagine if the character of a brave female astronaut or an intrepid pioneer woman or a sexy cabernet singer had to stop and fumble in her purse for a tampon? That would add a new meaning to the term "Ragtime."

Consider the word "hysterical." Female hysteria was a once-common medical diagnosis, and its treatment was routine for many hundreds of years in Western Europe. In the medical literature of the nineteenth century, women considered to have it exhibited a wide array of symptoms and "a tendency to cause trouble." In extreme cases, the woman might be forced to enter an insane asylum or to undergo a surgical hysterectomy. That left plenty of time for the men to go camping, drink beer, and hunt animals. Or run for political office.

Many of us middle-aged women never received adequate information about having periods. Our bashful mothers handed us the blue Kotex box, an elastic belt, and a pamphlet with serious phrases such as:

"You will bleed every month for several decades from the Don't-Touch Area."

"There could be intense cramping, debilitating pain, and personal embarrassment, but no one wants to talk about it. Especially boys."

Nothing to fear, right? Our mother also worried about our ability to remain fresh and clean "down there." Ads from the fifties warned a woman that feminine odor could end their marriage! So, get out the Lysol and douche "the vaginal canal" if you want domestic bliss. Then you could use Lysol to clean the bathroom and really please your man. 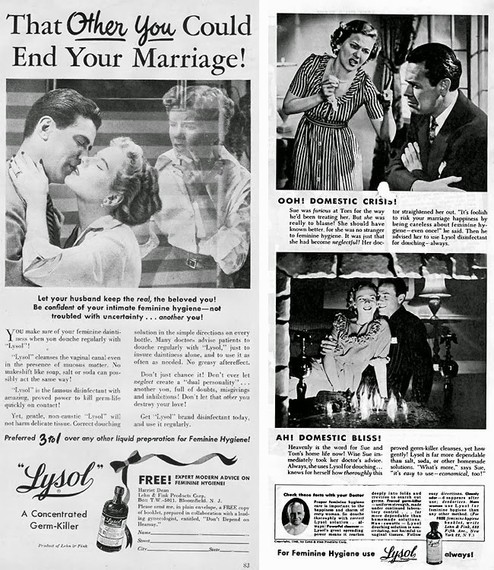 At least we were better prepared with our daughters, and we gave them Judy Blume's wonderful 1970 book titled Are You There, God? It's Me, Margaret. Our daughters could identify with the excellent fictional account of a young girl having her first period. Of course, the book was banned in several schools and libraries because it was "sexually offensive and immoral." We've not progressed too far from medieval times when it comes to discussing periods.

In researching various websites including the Museum of Menstruation and Mental History, and a witty blog at Period Fairy, I discovered some interesting facts about menstruation. I've added my own irreverent interpretation.

1. In fertile females, their body prepares for pregnancy every month. When that doesn't happen, the uterus sheds its lining through blood and tissue. Missing a period can bring joy or fear, depending upon how much the woman wants to be pregnant.

2. During Biblical times, menstruating women were considered ritually impure and were required to be physically separated from men for the entire time they were bleeding. The men, meanwhile, continued to get drunk and kill each other.

3. England during the 1800s, The British Medical Journal published an article stating that menstruating women were medically unable to pickle meat, and in France, women on their periods couldn't work in sugar refineries because they would spoil the food. (And men wonder why we get moody! Go pickle your own damn meat.) 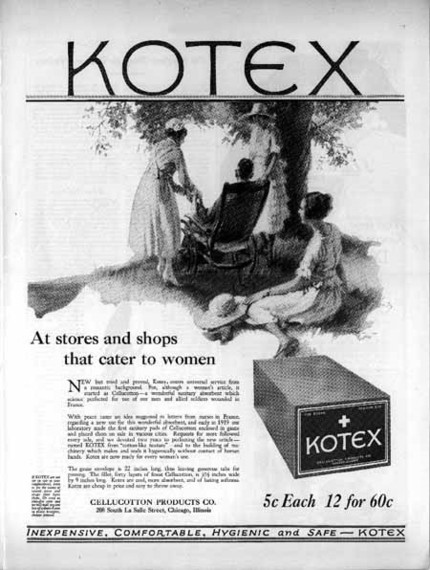 4. The first commercial sanitary pads were produced in the early 1900s, and an advertisement in 1921 showed women caring for a wounded soldier because in World War I, French nurses noted that cellulose bandages used to treat wounds absorbed blood better than plain cotton. The Kotex ad rationalized that if the product was good enough for the military, it was good enough for mere women. 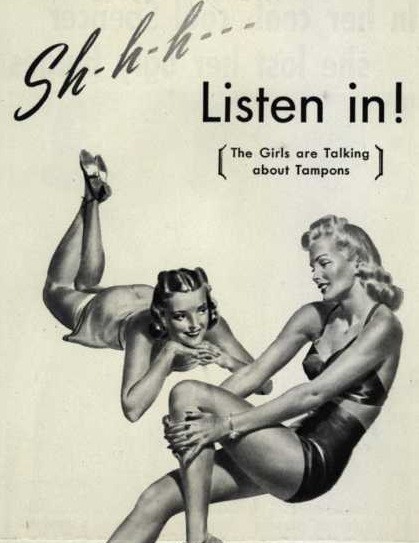 5. Twenty years later in 1941, Kotex tossed the dutiful caretaker message and went straight for the gossiping women in swimsuits, and the caption, in discreet parentheses of course, said "The girls are talking about Tampons." Those scamps not only removed their humble nurse's outfits, they showed legs! Just imagine the fun times women had back then as they lolled around secretly chatting about tampons. 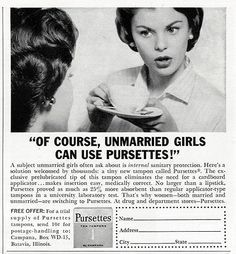 It only took another 21 years in 1962 for Pursettes brand of tampons to assure women that unmarried girls could safely and morally use their product. Apparently, there was fear that tampons would remove the virgin status of women, and as everyone knew, all unmarried women were virgins.

6. Some cultures continue to penalize women. In the mountains of Nepal, menstruation is regarded as unclean so women are banished to small, bare huts. They should just accept their fate and plan a relaxing staycation.

7. In sharp contrast, several Native American cultures consider a woman in menses to be at the height of her natural powers, and the Lakota tribe wouldn't allow a menstrual woman to come near the warriors because they feared her power would weaken their strength. Well played, Lakota women.

8. Menstruation will end if a woman reaches a certain age or has a complete hysterectomy. A hysterectomy that removed the ovaries can also result in immediate menopause, which brings a whole new collection of maladies, including moodiness, night sweats, exhaustion, forgetfulness, weight gain, and hair loss. But, look on the bright side. The money saved by not buying feminine products can go for therapy and/or wine.

Call it a visit from Aunt Flo or The Curse or being On the Rag, women have survived their time of the month for thousands of years. They will continue to do so, because they're so tough and powerful. And, they can shine on prime time television during a political debate. Just ask the Lakota. Being fierce is admirable, but every now and then I secretly imagine what it would be like to have belching contests and light farts.