It was exactly two years ago, as Gaza resident and Palestinian doctor Izzeldin Abuelaish was preparing for an interview with an Israeli TV station, that the unspeakable happened. January 16 was to be the last day of Israel's 2009 invasion of Gaza, and Dr. Abuelaish was to give an eyewitness account of the destruction and despair he was seeing from his window. A self taught speaker of Hebrew he was a rare voice from inside the Palestinian territory who could give Israeli viewers a sense of the horror unfolding just a few miles away. Suddenly two tank shells exploded into his home killing three of his daughters and a niece. He kept that appointment to be interviewed on T.V. and his raw anguish seized the attention of the world. Those who heard his voice that day will never forget it.

Since then the Israel Defense Force has conceded firing those shells, but government authorities have declined to apologize, calling the incident an "operation of war." Dr. Abuelaish has not given up hope that he WILL get that apology and that his daughters will be "the last sacrifice on the road to peace between Palestinians and Israelis."

So Dr. Abuelaish is again raising his unique voice, this time in the form of a book, I SHALL NOT HATE: A Gaza Doctor's Journey. Dr. Abuelaish met with me to talk about his daughters' legacy and why he is still hopeful for peace and understanding among Israelis and Palestinians. 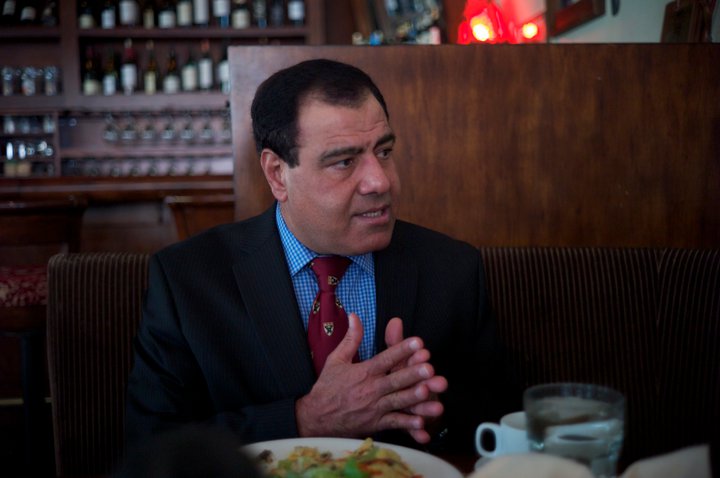 Q: Why did you write your story so immediately? You barely had time to
digest the events that occurred.

A: People forget. I want to give hope in this world where people are desperate and frustrated and to give them a role model with a real example, not to speak about something theoretical but something I lived. In every bad thing there is something good. It depends, how do you look at things? Don't waste your energy on the negative. Work on the positive, decrease the negatives, otherwise you will drown in darkness and this is not life.

Q: We hear a lot of talk these days about trying to see the glass as half full but to hear it in the context of what you lived through is extremely powerful.

A: But every one of us can have the same feeling. I want each of us to ask himself: what do we want from life? What do we want to achieve? There you can find the way. No need to compete, to fight. Change is not coming from outside. It comes from me. Don't complain. Start with yourself [and ask] where are you going? What did you give? Always we are focused on what we get and I think life and happiness comes from how much we give not how much we get... Happiness is long term. It comes from others, from good deeds. I can't be happy by myself. But if I want to measure my own happiness, if I share it with you, it magnifies. That is something we all share. Don't deny the other and blame them. No one is perfect. There are no angels. We make mistakes. If I make a mistake [I] just say I am sorry. You will appreciate it and it relieves you. It's healing. But when I make a mistake and deny you and justify my mistakes -- we must get rid of this. We need the courage. At the end of the day when you put your head on the pillow know that if you are not doing good things, at least do no harm. Those who say the glass is half empty, ask them if they know their neighbors, if they are attached to the people closest to them. The barriers we have we have created they are artificial. Don't wait for the other, start with yourself. 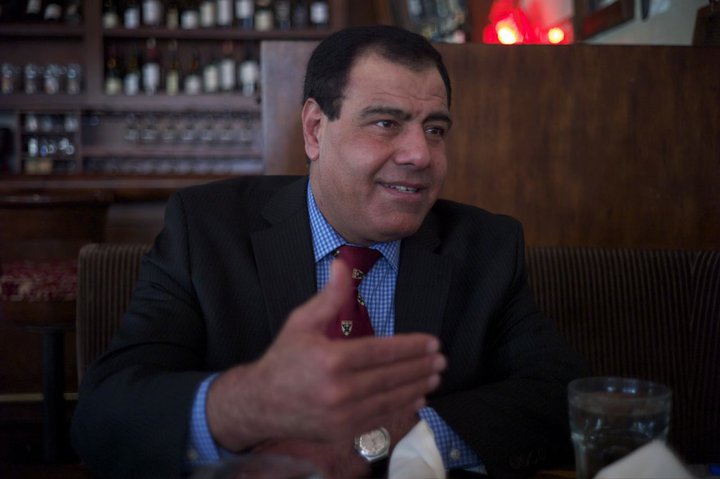 Q: What you went through each day to get to your job made me angry just to read about. Waiting at the check points, being harassed, and then waiting hours for no good reason. You talk about this as "patience training."

A: Once you are angry you lose control. Then you regret things. So please
take a step back. The strongest person is not the one who is strongest
physically or [can fight or dominate], it's the one who behaves himself and
controls his anger. It's not about fighting. We need to build this strength
in our children; not to be impulsive. If we want to raise them to have good
values, you have to admit when you make a mistake. I want to encourage
them to work for those values.

Q: We have conferences all over the world about this peace. The need for
dialogue, for common ground, but we don't seem to be getting anywhere.

A: Always they want to talk about dialogue and reconciliation. But do they
have peace inside themselves? Those who work for peace should ask
themselves what they [wish to] achieve. They are going blindly and it's
become a peace industry. A business. This is harmful. We are losing faith
in peace.

Q: There are a lot of people who are earnestly trying to do the right thing.
What do you want to see them do differently?

A: In the larger scale it's not efficient, not effective. How
many people, how many organizations ,how many conferences working
for peace [and] where did it go? Peace is fading. It is escaping from
us. We are chasing it away. In Palestine the enemy is the ignorance of
Israelis about Palestinians and the Palestinians about the Israelis. We
are misperceived by the media. If they say something it is holy. But don't
underestimate your [own] thinking. [Stereotypes are passed on]
without making an effort to find the truth. Where is the evidence? I need
evidence. If it is logical I accept it, if not I deny it. Don't just listen to others. 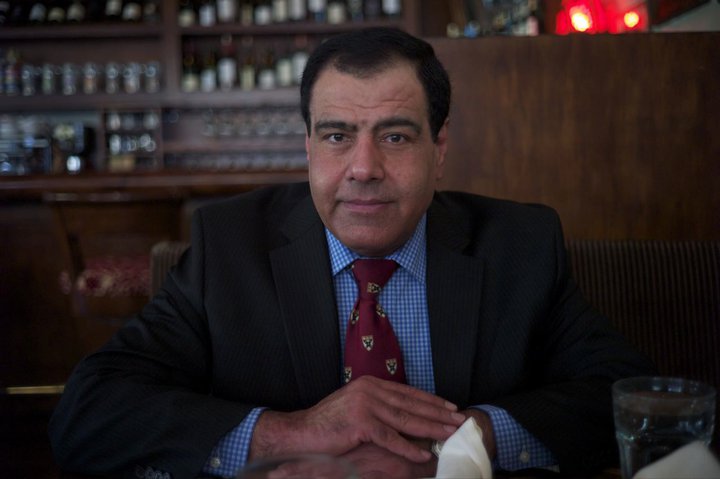 Q: You somehow found the time during your extensive medical training to
learn Hebrew fluently. That made you a part of the media because you
could communicate in their language from a place the Israelis couldn't go.

A: Our problem as Palestinians and Israelis is a lack of
trust and it comes from lack of communication. We don't meet, we
don't know each other. I was blessed [because] when I learned it I
lived it. I enjoyed it not just to communicate, but to feel it. We need
the spirit of the language and not just words. I feel closer
when we speak Hebrew. It helped me a lot. I urge everyone: we need
to learn each others language and to speak in one language.

Q: You recently launched a lawsuit against the Israeli government.
To some this has seemed paradoxical considering your message of dialogue
and reconciliation.

A: I understand your interpretation. But we need to admit when we
are wrong to move forward. [The lawsuit is] a message for
Palestinians and Israelis to give them hope. Humans can't be denied or
neglected by the law. There is a statute of limitations of two years. Human
beings, our beloved ones have no statute. How do I say to my children
that I forget them? One day I will meet them and [how] can I say I forgot
you? That is insane. [My kids] are not collateral damage, they are human
beings and we need to show human life is valued. It's time to stand up and
to take responsibility. To show human life is precious. So as I am suing I
am helping. I want to awaken a conscience. I want the person who did it to
go to sleep with a peaceful mind.

Q: You write that in your heart you are sure that whoever
killed your children has it on their conscience already.

A: God bless him one day when he has children. It's not easy. When
you are driving and you hit a bird or an animal, how do you feel?
What about a human? It will follow you all of your life. So I want to help
all of us to overcome it in a healthy way and to give justice and peace to
those beloved ones in a positive way. When I asked for an apology,
for responsibility, I don't ask for myself. Any compensation goes
to a foundation for girls and women in the Middle East including Israel.
A human life is not a matter for negotiation or bargaining. For two years
I have been working on that. When I receive a letter calling it "collateral
damage" and telling me to forget it, how should Ireact. Can anyone accept that?

Q: I quote you: "We all know what needs to be done, so what is stopping
us?"

A: The ego, the greed, and the arrogance. These are the main three problems every one of us is facing. It's universal. So even in the schools we need to teach our children and to build a new
generation to avoid these three threads. They are epidemics.

As a doctor he knows a thing or two about diseases and their treatment.

Dr. Abuelaish has established a foundation in honor of his daughters and
his niece.As stated on its website, the work of the foundation is based on the belief "that every girl in Palestine and
throughout the Middle East has the right to higher education and training."

The goal of the foundation is to provide financial assistance to young
women intent on studying in the areas of medicine (medical doctor and/
or nursing), law, business administration and journalism. These four fields
of study have been chosen to reflect the areas of interest that Dr.Izzeldin
Abuelaish's three daughters -- Bessan, Mayar and Aya - and his niece
Noor -- planned to pursue before their young lives were so brutally cut
short during the Israeli incursion into Gaza in January 2009.

The awards will be offered to students from across the Middle East and
enable them to study at universities in Palestine, Israel, Lebanon, Jordan
Egypt and Syria.