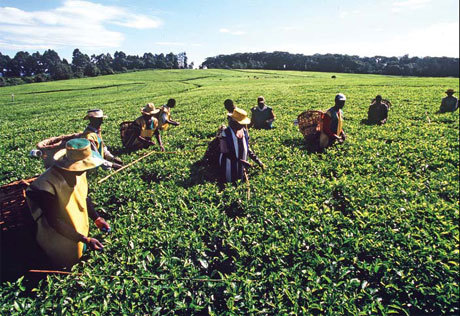 Under Vision 2030, the agriculture sector is to be made more innovative, commercially oriented and modern. Photo Credit: Wikimedia

Today 21 September 2016 is the International Day of Peace.

Kenya has the largest number of jobless youth in East Africa, putting a strain on the economy's growth and also threatening peace and security when hopeless youth gravitate towards violent extremist groups.

Today, youth form two-thirds of Kenya's population, many of them unemployed, with the ratio of youth unemployment to overall adult unemployment standing at 46 percent, according to the 2009 Kenya Population and Housing Census. At the same time, there are eight dependents for every ten working Kenyans, meaning that the average worker will very often have little left to save or invest for growth.

While this youth bulge may seem like a disaster in the making, investing in the sectors with highest potential can turn it into a gateway to rapid economic growth and development as we have seen among Asian Tigers like Singapore, South Korea and Malaysia.

By all projections, agriculture presents this opportunity.

While the African Union has recognised agriculture as the driving force of social and economic transformation, the youth often feel that agriculture lacks the glamour, sophistication and allure of the professions they seek.

This is regrettable. Africa not only has the largest percentage of arable land in the globe, and untapped potential for irrigated agro-pastoralism on its vast arid and semi-arid lands, but it also has the highest ratio of young people with the necessary knowledge, innovative skills and physical strength.

Of particular interest are youth in hard to reach areas, such as the arid and semi-arid lands, who are increasingly disgruntled by dim prospects of good jobs and increasingly prone to the temptations of extremist groups. These groups sway them with blandishments and exploit their feelings of exclusion and hopelessness.

In northern Kenya, which has borne the brunt of extremism in the country, traditional livestock farming methods can be targeted for transformation into a quality-driven, export-targeting industry. This calls for investment in education, rural transport and electricity, and smart business and trade policies.

In these areas, formal education should provide young people with basic numeracy and literacy, managerial and business skills, and introduce them to agro-pastoralism. It has been shown that education is key to overcoming development challenges in rural areas, and that improved access to education also improves rural children's food security.

The power of the internet also offers a great opportunity for attracting youth in far-flung areas to agriculture. Packaging and disseminating information on agri-business to the youth through social media platforms like blogs, websites, Twitter and Facebook has proven effective in Kenya. Much more can be achieved with increased access to the internet especially in the remote parts of the country.

There is a great potential pay-off for the continent, according to the World Bank, African agriculture and agribusiness could be worth $1 trillion by 2030. Clearly, this is the low hanging fruit that Kenya should aim to invest in to solve the myriad problems associated with youth unemployment.

Agro-pastoralism has great potential to improve livelihoods for youth and women and reduce food insecurity, create incomes and generally help youth to feel engaged and involved with the national development agenda. Those promoting entrepreneurship must therefore include agribusiness as a priority area of focus, particularly at the county level.

Acting on this, President Uhuru Kenyatta during this year's African Green Revolution Forum held in Nairobi, announced that the government would invest US$200 million to enable 150,000 young agricultural entrepreneurs to gain access to markets, finance and insurance.

With their dynamism, enthusiasm and innovativeness, the youth are our greatest asset and a force for improving the productivity and growth of all sectors in Kenya.

To reap the dividends, Kenya's priority focus needs to be on growth in sectors that can absorb them, particularly agriculture.

Policies must also ensure that women and girls, who do most of the actual work in farms across Africa, can achieve their potential. Lack of collateral and financial literacy often make them ineligible for financial assistance while cultural norms deny them land inheritance rights and, at times, restrict their movement and access to markets for their produce.

Kenya's Vision 2030 aims to turn the country into an industrialized, middle-income country and provide a high quality life in a safe and secure environment to all its citizens by 2030.

It is only when the current large group of youth has been given education and skills demanded by the sectors of greatest potential that we will turn the youth bulge into a force for good and transform Kenya into a peaceful and prosperous nation.

Ambassador Amina Mohamed (@AMB_A_Mohammed ) is the Cabinet Secretary in the Ministry of Foreign Affairs and Trade. Siddharth Chatterjee (@sidchat1) is the United Nations Resident Coordinator to Kenya.