In March of 2015, the West Virginia legislature overrode the Governor's veto of HB 2568, the "Pain-Cable Unborn Child Protection Act." As noted by the Governor, who vetoed a similar bill last year, the bill is unconstitutional. Arizona passed a similar law in 2012, and the U.S. Ninth Circuit Court of appeals struck down the law as blatantly unconstitutional. In 2014, the U.S. Supreme Court refused to review the appellate court decision, which means that the law's rejection as unconstitutional stands. Undeterred, West Virginia has now repeated the error.

When realtors dictate the practice of medicine, everyone loses. The West Virginia bill features junk science and other glaring deficiencies. The caption of the bill is illustrative: It has two different errors, one medical and one semantic. First, a fetus is incapable of experiencing pain. Second, a child cannot reside in the uterus. Use of a dictionary resolves the semantic problem, but what is the evidence concerning the notion of fetal "pain"?

What Is Pain?
Pain is defined as "An unpleasant sensory and emotional experience associated with actual or potential tissue damage, or described in terms of such damage." Pain has two necessary elements: an unpleasant stimulus and an emotional response to it. Neither is possible for a fetus.

Laying Down the Cables
Although nerves from the periphery reach the spinal cord of an embryo early in development, they only reach the brain late in pregnancy. For example, an embryo may respond to touch as early as 8 weeks of pregnancy, but this is a spinal reflex, analogous to a knee jerk when a physician tests reflexes with a rubber hammer. The leg movement does not involve the brain at all. Similarly, an amoeba or an earthworm will respond to a pinprick, but no one would suggest that these creatures are sentient. 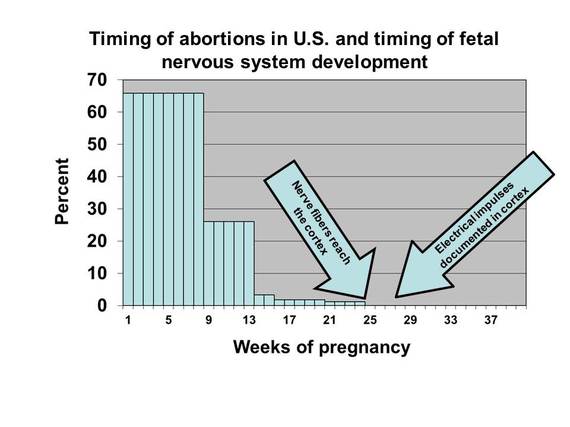 Fetal sentience?
Even if the wiring were in place, could the fetus think or feel? Electroencephalogram studies indicate that the earliest point in pregnancy when a fetus shows a brain response to stimulation of the periphery is at week 28 to 29.

Pain Palette
Pain reflects thought, sensation, and emotion. All are essential to the perception of pain. Consider colors: mixing red, blue, and yellow paint produces brown. If blue is deleted, orange results from blending red and yellow. Similarly, taking away the emotional element of pain yields something different. The experience may be noxious, but it cannot be pain.

Emotion, thought, and experience all modulate the perception of pain. A fetus has none of these. Moreover, some evidence indicates that the fetus never enters a state of wakefulness while in the uterus.

Scientific Evidence
The medical literature is clear: fetal pain is biologically impossible during abortion. A multidisciplinary team of clinicians and scientists at the University of California San Francisco published a thorough review of the world's scientific evidence in 2005 in the Journal of the American Medical Association. Since the science was unassailable, abortion opponents, unhappy with the evidence, chose to attack the authors and the journal editor instead.

Conclusions of Medical Organizations
Obstetrical and gynecological organizations on both sides of the Atlantic Ocean concur: fetal pain is not possible during abortion. The Royal College of Obstetricians and Gynaecologists in the U.K. reviewed the world's literature and issued its report in 2010. It concluded that, "...pain is not possible until after 24 weeks." The American College of Obstetricians and Gynecologists has the same assessment: "fetal perception of pain is unlikely before the third trimester." Abortions are not done in the third trimester of pregnancy.

Opposing Views
Abortion opponents rely on scanty evidence, obsolete studies, and speculation. The notion that a fetus can feel "pain" while bypassing the cerebral cortex (brain) has been labeled "unsubstantiated conjecture." One physician whose work has been widely cited by abortion opponents now refuses to testify on this issue, saying that, "I feel it's just gotten completely out of hand."