A plucky little kitten born without bones in his front legs has learned to walk on his elbows and is being given another shot at a healthy life, thanks to an animal charity in the U.K.

According to the Sun, the four-month-old kitten, named Harvey, suffers from an extremely rare condition called radial agenesis and was born without the bones that would have connected the upper half of his front legs to his paws. 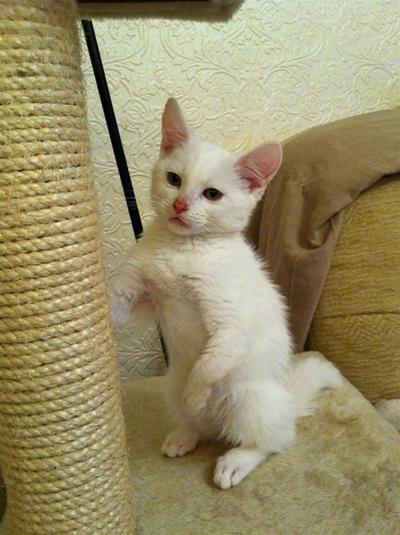 Harvey was reportedly sold by a "cruel owner," who hawked the cute kitty on an online advertising site similar to Craigslist. Fortunately, the kitten was soon purchased by a good Samaritan, who then handed him over to the Glasgow, Scotland, branch of U.K. animal charity Cats Protection.

The charity found Harvey a temporary home with "foster mom" Liz McCulloch, who has marveled at the brave kitten's ability to move about like any able-bodied feline.

"He’s a lovely little thing," she told the Sun. “Because Harvey was born that way he doesn’t know there’s anything wrong with him so he runs around on his elbows and happily plays with my other cat and dog."

However, McCulloch points out that Harvey will one day need to undergo an operation to correct his front legs. Without surgery, he is in danger of damaging his spine as he grows bigger, which could potentially cause him "great amounts of pain."

Thanks to Cats Protection, however, Harvey's future is bright.

After taking the kitten in, the charity set up a fundraising page for Harvey's surgery. "Show your love for Harvey people of Glasgow!" pleaded the charity.

The response from donors was swift. As Life with Cats notes, the charity met its goal of about $4,700 within a few days.

Harvey is now awaiting his surgery and will be placed in a "forever home" once he recovers.