Noxious fumes assault my senses as I pull up to Old Mission Santa Barbara on a foggy Monday morning. The 'Queen of the Mission's' website said to expect "graceful lines with soft, blending colors" but I was still rubbing my eyes as I approached the front of the Spanish Colonial Revival buildings.

Just as I identified the source of the fumes, three big red busloads of German tourists arrived, anxious to take the tour of the historic Mission founded by the Spanish Franciscans 1786.The doors of the main building swung open and I meandered through the gift shop, then wandered the 10-acre hyper-landscaped sprawl of Santa Barbara's chief cultural landmark, that's home to a small community of Franciscan friars. 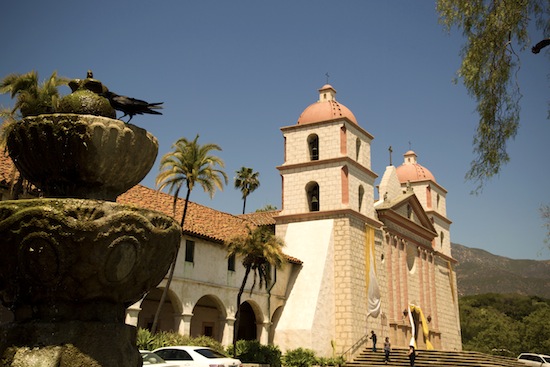 I was enjoying the tour when a small wooden sign in the adjacent cemetery stopped me dead in my tracks. It said 4,000 dead Chumash were buried right here at the Mission. I squinted and shook my head like a wet dog, wondering if the bus fumes had permanently affected my vision, or that it might be a typo.

Looking for answers, I called Ernestine De Soto, daughter of the last native Chumash speaker and grandniece of the last pure blood Chumash. She told me that, "90 percent of the bodies buried under the walk in the cemetery -- that thousands of tourists traverse every year -- are babies... infants who died from measles and smallpox." Her great-great-great grandmother was in the Chumash village on the beach at Santa Barbara the year the Spanish arrived.

Her friend, John Johnson, Curator of Anthropology at the Santa Barbara Museum of Natural History puts the number of dead Chumash at 4,400, but cautions me not to fall prey to the La Leyenda Negra, (aka the black legend) an anti-Spanish propaganda campaign that dates back to the sixtenth century, but that doesn't hardly seems necessary after he adds that, "8o percent of the babies born at the Mission died before they saw their first birthday." 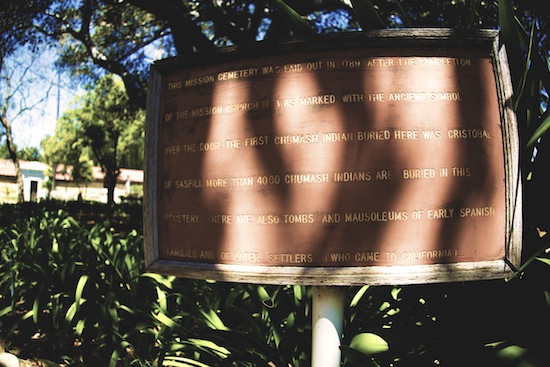 Starting in 1806, an epidemic of measles and smallpox devastated the Chumash population. Johnson told me that the Missions were secularized over a 50-year period when there was a 90 percent population decline in the native population. Earnestine De Soto, a devout Catholic, says she doesn't blame god, she blames man. "I'm not going to give up my religion because of what Man does," she said.

Earnestine De Soto knows where the bodies are buried and says she wants to be buried there too. She says there are two empty spaces in a mausoleum where her great uncle is resting eternally. "I want to be with my great uncle. He used to bounce me on his knee," she says adding that it will be a cold day in hell before they let her rest next to her relations.

She offers some advice to the friar's at the Mission: "As for the sex crimes, that's really the fault to the upper echelon. That's been going on since the days of Rome and before Christ. They need to clean up their act in the Hierarchy," she said.

De Soto knows about other ghosts still haunting the Old Mission: the dark history of clergy sex abuse of minors in Santa Barbara that dates back to the 1940's. The Mission and St Anthony's Seminary, a Franciscan boarding school just across a small road in the back of the Mission emerged as the center of the scandal in 1993 when news of scope of rampant abuse broke.

My tour of Old Mission Santa Barbara was the impetus for my new story, Sacred Monsters for Mission and State, wherein I consider the larger implications of the priestly culture of celibacy in the Catholic Church and lingering effects of sex abuse on the American Rivera.

Federal Judge, Peter Lichtman wrote, "Since 1958, 76 Santa Barbara children have been sexually assaulted by Roman Catholic clergy," noting that 54 of those children were abused by the friars working at or near St. Anthony's and the Santa Barbara Mission.