The number of articles written about the death of the romantic comedy is neither romantic nor comedic. In fact, it's downright depressing. But it's time to direct our attention to the cartel of women attempting to revive the genre. Among them are Leslye Headland, whose "Sleeping with Other People" premiered at the Sundance Film Festival; Amy Schumer, who wrote and stars in this summer's "Trainwreck"; and Lake Bell, who stars opposite Simon Pegg in "Man Up." Bell's film premiered last week at the Tribeca Film Festival, immediately snagging distribution, which we're going to presume happened in part because there are no damn rom-coms anywhere.

"Man Up" harks back to the genre's classic mistaken-identity schemes, with Nancy (Bell) going along with it when a stranger (Pegg) thinks she is his blind date. That, friends, sounds like a good, old-fashioned rom-com. Bell bemoans such films' deterioration just as much as the next "Notting Hill" obsessive, and that doesn't end with "Man Up" -- the actress, who won Sundance's screenwriting prize for 2013's "In a World," is currently writing another romantically tinged film called "What's the Point." In other words, there was much to discuss when The Huffington Post sat down with Bell a few days after "Man Up" premiered. If her work is any indication, prepare for the Rom-Com Renaissance. 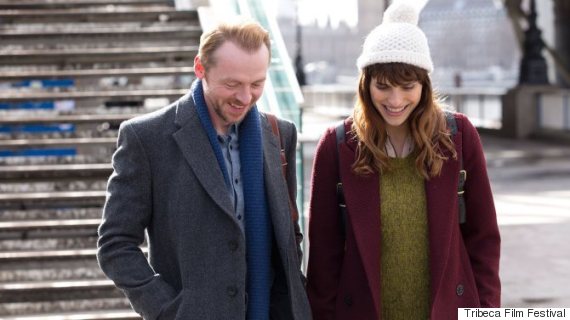 This is a conventional romantic comedy, and I mean that with the highest praise.
Yeah, I’m a fan of the rom-com. I will not hate on it. I grew up watching them and clearly when you see "Man Up," Tess Morris has written a script at the hand of someone who has watched all of the greats and with love and care. She has sort of written an homage to them in a generous way. The movie is very much a modern take on a classic form, and it’s very sweet-spirited, which I think is very unique in this day and age of romantic comedies, which tend to be a little winky-winky or the anti-romantic comedy -- a little mean, a little edgy. This is not that. It’s very sweet, it’s a little dorky, and that’s my favorite kind of laughing.

What has happened to traditional rom-coms?
I think people often try to reinvent the wheel a little bit, and what often ends up happening is you don’t go anywhere. The wheel is pretty good; it’s been functioning for a while. So I think with this, at the end of the day, a funny love story is a funny love story. Especially in thinking about “In a World,” I tend to lean towards projects that have a kind spirit because I think it’s even more provocative than being mean or cheeky. I think it’s more interesting. And frankly, in this world, not to be all “peace, love and happiness,” but when you go to the cinema, that’s refreshing. It’s like, “Why not just have a good time?”

Do you think part of the decline has to do with these movies' unrealistic dating standards, particularly for women?
I mean, look. I sort of feel like classic romantic comedies always have these great male characters and these great female characters. That’s what makes them great. When you think about "Annie Hall" and "When Harry Met Sally" -- those are two I pull out of the air -- they’re classic romantic comedies, and the female characters are great. They’re flawed, hilarious, active, very on the front foot about their actions and feelings and emotions. Both the man and the woman are wonderful trainwrecks and you’re rooting for both of then. In that sense, there are just not a lot of them out there because I think people try to fix what’s not broken. That’s all.

Have you been offered romantic roles like this before?
First of all, never this vast. I’ve never been given the opportunity to fully realize a British character, and never really had the opportunity to be the girl in something. In a way, I feel like because of "In a World," I sort of provided an opportunity for myself to be the lead person, despite saying, “Hey, the main girl doesn’t have to be perfect.” And there are similarities in the messy, earnest nature of the "In a World" character and Nancy. I'm quite organized myself, but I like playing these messy women. They’re not fully misanthropic and not functioning in society, but they’re having trouble with something in their life, whether it’s achieving their career goals or achieving love. I have two younger sisters that I love very much, and the conversations we have -- just the female condition -- that is something I relate to. Both of those characters, I think, exist in a very truthful place within the world.

I think somewhere a misguided notion took hold that female rom-com characters were incapable of independence.
Right, that’s what I was saying. It’s just, like, they’re pretty, they’ve got a job, they could tie their shoes properly and do their laundry, but for whatever reason, because of X, Y or Z relationship, it’s grayer. You and I aren’t completely a mess, but we both probably go to therapy. I don’t know if you do, but I do, and I enjoy it. And it’s more realistic and it’s more interesting and I think it’s more relatable. And especially because I think poor romantic comedies often get criticized for having an astonishingly attractive model-looking person being like "wah wah wah" and they can’t figure it out, whilst I have good features, too. [Laughs]

You've talked in the past about being resistant to marriage, but obviously you've changed your mind on that.
[Laughs and shows off wedding ring] I had a baby, too!

Were you hesitant on that, too?
No, I was just like, “Oh, eventually I’ll have a baby” -- I just never thought I’d get married.

Would you have been resistant to rom-com leads before getting married yourself?
That’s a good point, but no, I’ve always loved romantic comedies. You go to the movies and you do want to be transported a little bit. I’m definitely an actual cinema preservationist; I hope that doesn’t go away because movies are about experience. If you go to see a great romantic comedy, you get to envelop in that feeling and the texture of what it is to be in love or to be misled and then come back around again with the emotional underdogs that are your protagonists. I believe in that.

And now you're writing a rom-com of your own with "What's the Point."
It’s an unromantic romance.

Tell me more.
It’s an investigation of different relationships within the construct and the unionship of marriage. And it’s a comedy.

It must be a relief to promote a movie that doesn't require the same energy that writing and directing does.
The thing that draws me to give X amount of years of my life to something -- because that’s ostensibly what making a movie is -- is getting married to a team of people and then going and making it. Especially when you’re writing and directing it, or directing and rewriting, I just look for content that is challenging in a new way because to do the same thing is not creative. True creativity is the hunger for new and for different. That is what I crave. ["The Emperor's Children," which Bell is directing] is a drama, I’m not in it. It’s a completely different cocktail of creativity, and that is highly intoxicating to me. That’s what you look for, right? It’s what turns you on. I don’t want to do a diluted version of "In a World" because I did "In a World." So when people are saying, "Oh, would you be interested in X, Y or Z and taking on this project," I say, "Well, I’d much rather take on directing a war picture than something I’ve already done."

So you have a war movie coming next then?
I know, I’m like, “Why did I say that?” Now people will say, “Well, Lake, we’ve got this great war picture.”

Watch the "Man Up' trailer: