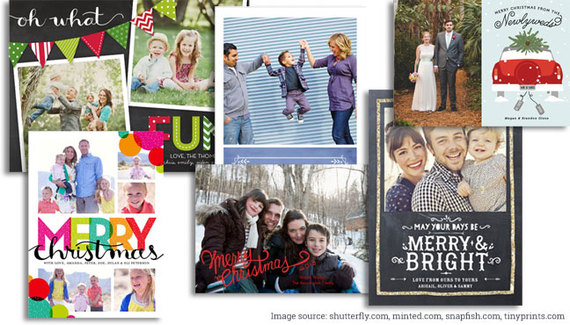 I want to preface by saying that I find articles titled "An open letter to..." a bit pompous and self-important. So with that, please enjoy this pompous, self-important open letter to the makers of holiday photo cards -- in particular the four companies (un)fortunate enough to have me on their mailing lists.

One of my favorite and longest-running traditions is designing our family's holiday card. I first created a card for my partner and myself in 2001, and haven't skipped a year since. With the onset of fatherhood four years ago, a requisite family photo now dominates the design. However, a couple of years ago, I was forced to use

As this year has had an above-normal level of stress, it crossed my mind to save some time and sanity and browse the photo card catalogs we'd received. Whenever I came across a layout I liked, I tried to picture our goofy mugs in place of the picture-perfect families smiling back at me. But as I turned page after page after page, I found myself growing disheartened, searching in vain for a photo of a two-dad or two-mom family. I guess it shouldn't be surprising, considering very few companies of any kind feature same-sex couples or LGBT parents in their marketing or advertising. Even the ones that are historically inclusive rarely show gays or lesbians outside of LGBT publications or broadcasts.

So I did a little experiment. I went back and scoured each of the catalogs I'd gotten, tallying up the families, couples and kids featured in all their glowing, photogenic glory, in order to get some concrete(ish) information. While I was at it, I also took a look at how people of color were represented.

The catalogs were from Tinyprints, Minted, Snapfish and Shutterfly. According to the site Top 10 Reviews, they rank number two, four, seven and nine respectively, among photo card companies.

And as I suspected, neither do LGBT people. 0 percent representation

I also checked out each company's web site and reviewed the first page of holiday photo card designs. The percentages of hetero couples/families held fast at 100 percent. And the Caucasian quotient was across-the-board white, ranging from 90-96 percent.

In addition, I looked at the online wedding/save the date offerings, since those often feature couple photos. While there proved to be a bit more racial diversity than on the holiday cards, it was still 100 percent Mr./Mrs.

Okay, so what's my point in doing all of this? Why is it getting under my skin enough that I actually did math? Because with all of the great strides the LGBT community (and our vastly growing number of supporters, allies and advocates) have made this last year, my hopes had been raised. Same-sex marriage became legal in my state of Maryland this past January; DOMA and Prop 8 were overturned in July; marriage equality passed legislation or went into effect in six other U.S. states, as well as in Uruguay and the U.K. We no longer have to look to TV characters and talk show hosts and Oscar nominees to see ourselves and our families represented. We can look to actual laws, true change and real people who are affecting and being affected.

So when I flip though endless pages of shiny, happy families, I expect to see mine right along with them, represented equally. Equally American, equally family, equally cheesy.

THE CHALLENGE / THE PLEDGE:

I know it's a small thing. A mere drop in a giant bucket of problems needing to be solved. But it's the little, day-to-day things that add up, get things started, and keep momentum going. So I'm going to issue a challenge and make a pledge (forgive me -- I'm feeling very soap-boxy).

If any of these four companies (or their competitors) include even one, teeny-tiny photo of a gay or lesbian couple, or better yet -- a family with same-sex parents -- I pledge to use them for our family holiday cards next year.* And I'll encourage all my friends/family/readers to do the same. And I'll write a follow-up blog post singing their praises.

Again, I realize this one thing isn't going to turn any tides or change any seas or some other aquatic metaphor. I leave the big battles to the activists and politicos with more energy and ambition and fewer four year olds and gray hairs. But I'll continue to fight the little battles, standing my ground and demanding my right to send out annoyingly corny photo cards of my family to every person I know.

One final message to Minted, Snapfish, Tinyprints and Shutterfly: I understand there's very little financial motivation for you to accept my challenge. And businesses like yours aren't likely the kind to benefit from the buzz a "controversy" like this might generate. So as companies that celebrate community, love and family, I appeal to you as thoughtful, caring people. If you choose not to include families like ours in your catalogs, you're missing out on a whole lot of beautiful.

THE CALL TO ACTION:

If you are a family with 2 dads or 2 moms, send me your holiday card or family photo, and I'll post it on the Designer Daddy Facebook page. My goal is to have as many families as possible by New Year's -- to show these companies the NEW faces of family in America! Visit the Facebook page and send via direct message, or email your photo to daddy@designerdaddy.com.

*If by some miracle more than one company includes an LGBT family, I'll promote all those that do, but get our cards from the one with the largest gay photo.

An earlier version of this piece appeared on Brent Almond's personal blog, Designer Daddy. You can also find him on Facebook.