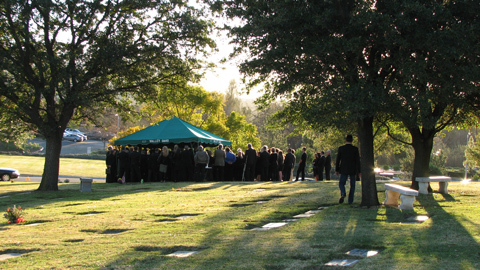 In As You Like It, Shakespeare said man has seven ages. The first four are each expressed in a single word: infant, schoolboy, lover, soldier. The last three needed explanation. There's a stage where everything comes together, and the man becomes a judge. It's the stage with "Fair round belly, with good capon lin'd, / With eyes severe, and beard of formal cut, / Full of wise saws." The sixth stage shows loose skin and the voice starting to crack and get higher. The last stage is second childhood.

My friend and first college roommate, Andy LaMarca, was right in the judge stage -- great health and weight, a hockey player and golfer, and enjoying family, friends, and his career as a feature film production manager. Then he died at the end of December. Massive heart attack. Fell right down. He was just 57, leaving a wife and two young daughters.

There's a stage that Shakespeare didn't define, but it's the decade where everyone you love starts dying. My mother left a little over a year ago, and now a friend my age has passed. There is no answer to "Is it fair?" It just is.

I originally met Andy's objects before I had met him. At the University of Denver, I walked into my freshman dorm room, a cube with two beds, and half the room was already occupied. His closet door was open, and his clothes were hung, divided neatly between shirts on hangers and pants on hangers. I didn't have any hangers.

His books on the shelf were in order of smallest to largest. There was one photo in a paper frame of a man in a military uniform. I picked it up. Out slipped a piece of paper that fell feather-like to the floor. I scooped it up and saw it was a funeral notice of Joe LaMarca, what had to be his father--who died at about the same age Andy did this week.

Andy was my roommate because we were both studying film. He dropped out after a semester to move to Los Angeles to be in film rather than study it. By the time I arrived in the Pacific city four years later to be his roommate again, he'd already worked as a camera assistant on several films including the infamous Roar, which is perhaps the world's most expensive home movie, produced and directed by Noel Marshall, starring Marshall, his sons John and Jerry, his then-wife Tippi Hedren and her teenage daughter Melanie Grifffith, to a cost of $17 million and a few lion maulings. It had already been in production a few years, and didn't finish until 1981, long after Andy left it to work on other low-budget films such as Grand Theft Auto, Malibu Beach, and Piranha. 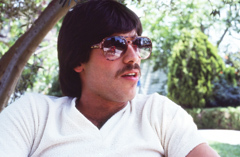 After I arrived, Andy wangled a job for me as sound man on a low-budget film called The Meateater. I told him I'd only run a Nagra recorder on a few student films. He said, "Fake it. That's how you get ahead in this business." In the years that followed, I found it was a good rule all around. I'd never been a professor until I had to fake it.

A turn for both of us came when I was directing my own short film. Andy put together a crew of twelve willing to work for free, and he was the cameraman. His girlfriend would be the star, a dancer, and another friend would play her abusive overbearing boyfriend. I was aiming for an Academy Award short, shooting in 35mm. A young woman going to the American Film Institute became my producer.

All was going well until the fire department knocked on the door, asking for my filming permit. "I don't need no stinking permit," I told my producer. "This is my apartment." The fire department, however, said I needed one and we wouldn't be able to get one until Monday. We were shut down. I didn't have enough money to pay for a permit and rent all the equipment again. My future Oscar fled into the night screaming.

I left filmmaking to pursue writing, where I didn't need permission to create. Andy, who had a personal license plate that said FILM4ME, stopped working on the technical side and started finding work as an on-set line producer. He faked it at first but did well, overseeing some major films over the years including Ace Ventura, Grindhouse, and more recently, part of Breaking Dawn. You can see his career by clicking here.

The morning after I heard he'd died, as I walked the dogs with my wife, Ann, I realized I knew Andy well only as a young man, the suave, sure, disco-loving guy who found dance partners easily. He always had confidence and was a schmoozer. He was made for the film biz.

When I saw him this week laid out in his casket, eyes shut, glasses on, with short gray hair, I witnessed his sixteen-year-old daughter distraught, crying until she had to be helped away from her father. I wondered how I'd never interacted with his family. We'd seen each other just once in the last fifteen years.

The fact was, he lived on one side of L.A. in Simi Valley, and I lived maybe 45 miles east in Eagle Rock. It felt more like I was in Bulgaria and he, Easter Island. We kept saying we'd get together for lunch but never did. He never invited me to one of his parties, nor did I think of inviting him to one of mine. I think we just didn't want to justify how our lives had turned in different directions.

He found me on Facebook last year, and we talked. He told me about his wife and two daughters in proud details and also said how the film business was so feast-or-famine, he was thinking of running an art gallery. He said nothing was being shot in L.A. anymore, no more sets being built in sound stages, which always meant spending months elsewhere, such as his four months in Brazil for Breaking Dawn.

And now he's forever out of L.A.

Another friend from college, newscaster Lonnie Lardner, knew Andy, too, and she called me when she heard. She said she's lost six friends in the last year, two others of them contemporaries from pancreatic cancer. She said no one had told her things would be this way. "It's what we have to deal with -- I don't like it." She added, "When someone you know dies, you just want to see the people you've been meaning to see right away, hurry, hurry, hurry." We set up a lunch for the next week. She said, "At this age, it's important to recognize things of value."

The other thing that moved me is when one of Andy's friends spoke at graveside, looking upon the many teary-eyed people. Not everyone had bought into the priest's exhortation that Andy had been visited by Jesus, who took Andy by the hand to heaven where we'd see Andy again someday. The friend standing near the casket said, "Andy is here," and he tapped his own head. "When you want Andy, he's just a thought away."

He's right. In whatever stage you're in, all those you need and love, living or dead, are there, one thought away.