On December 26, 2004, a massive earthquake in the Indian Ocean near the island of Sumatra triggered one of the worst natural disasters in memory, known around the world as the Asian Tsunami. Walls of water smashed into the coasts of Indonesia, Sri Lanka, Thailand, and other neighboring countries, taking the lives of some 280,000 people with them. Many of those who were able to cling to life sustained massive bodily injuries and lost family members and their possessions in the swift-moving waves. The Province of Aceh, Indonesia, which was closest to the epicenter of the quake, was the area hit hardest by the monster waves.

By chance, the newly-published, hardcover edition of my book, Prisoners of Our Thoughts, found its way into the hands of a Jakarta-based professional services firm that was developing a "readiness" program to prepare volunteers to respond quickly and effectively to the vast devastation and suffering that they would encounter in Aceh. This program, I'm both humbled and proud to say, included my book as a training resource, and it enrolled a wide variety of aid organizations, including local government bodies and nongovernmental organizations, such as UNESCO and UNICEF, involved in the relief effort.

The decision to use Prisoners of Our Thoughts was made because of the coping skills it teaches and its focus on the human search for meaning in all situations. The book was viewed as a primer for volunteers to learn how to confront the catastrophe while, at the same time, deal with their own psychological reactions to the trauma. The seven core principles described in the book were viewed as part of the "core competencies" (that is, the essential knowledge, skills, and attitudes) required by the volunteer aid workers participating in this capacity-building program effort.

This practical application of the principles, in and of itself, made the book's publication worthwhile (and, yes, meaningful) to me in ways that I still am unable to describe adequately. This said, I know in my heart and soul that I learned a great deal and grew significantly from the experience, even though I pray that it never happens again and that the survivors, as well as the thousands of volunteer aid workers, continue to heal from the deep wounds that have undoubtedly scarred them, in one way or another, forever.

Of the seven meaning-centered principles that were used in the Province of Aceh after the tsunami, I would like to focus on one, in particular, for the remainder of this post. In my book, it is introduced as Principle 6, "Shift Your Focus of Attention" (for the previous five principles, see my note at the end of this post). Put differently, this principle can be stated in the following way: Deflect your attention from the problem situation to something else and build your coping mechanisms for dealing with stress and change. As you can imagine, this principle was put to frequent use by the volunteer aid workers in Aceh, as it was, albeit unconsciously, by the survivors of the tsunami.

As a case in point, the photo below shows some children playing in what was left of downtown Banda Aceh, the capital city of Aceh Province, shortly after the tsunami. The boat, by the way, is not supposed to be in the street or in front of the hotel! These young boys, now known as members of the "Tsunami Generation" are playing in the street in spite of all of the devastation and anguish around them. Unlike many adult survivors who suffered from a form of "survivor syndrome" (referred to today as "post-traumatic stress disorder") and felt guilty that they had survived the disaster whereas others--such as family, friends, neighbors, and colleagues--had not, these youth display a miraculous level of resiliency and a capacity to "move on" under what can only be described as a horrific, inescapable situation. Indeed, I learned that it was the Acehnese youth, because of their innate ability to find something positive in the face of immense suffering, who became the inspiration and "role models" for their adult peers! 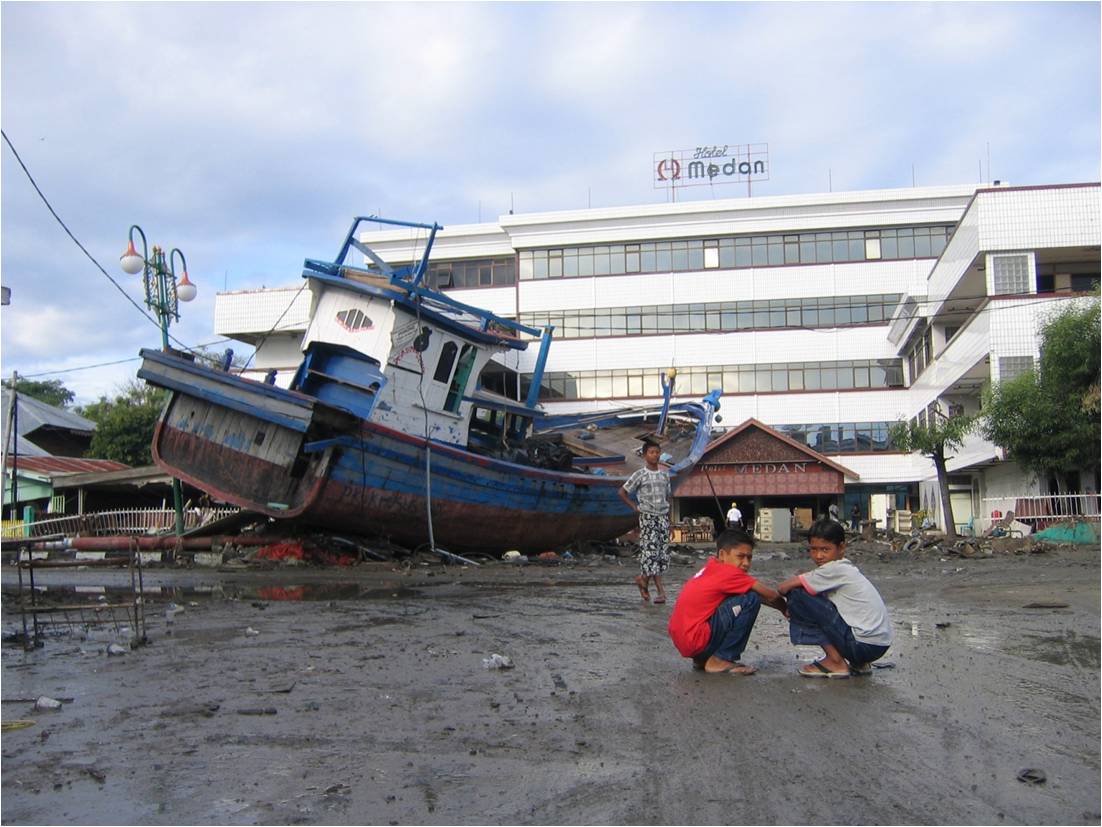 Of course, you don't have to experience a tsunami or other kind of natural disaster (let's not forget Hurricane Katrina) to practice the meaning-centered principle, "Shift Your Focus of Attention." My mentor, Viktor Frankl, who frequently relied upon this logotherapeutic principle--he labeled it dereflection--when he was imprisoned in the Nazi death camps, emphasized that it is also particularly useful when you are faced with a difficult situation or decision to make, be it in your personal life or your work life. The principle of dereflection, Dr. Frankl would say, helps us to ignore those aspects of our life and work that should be ignored. It also helps to turn us away from being self-absorbed with our problems and directs us toward the true meanings that beg to be discovered by us. In effect, dereflection encourages us to perceive something new in a situation so that we may let go of our old perceptions and ways of doing.

"Dereflection can only be attained to the degree to which...awareness is directed toward positive aspects." --Viktor Frankl, The Doctor and the Soul

The current economic crisis, to be sure, is taking its toll on people, not only in the USA but around the world. It is also testing, in no uncertain terms, our resiliency as individuals and as a "people." Although it may at first seem difficult to imagine, the same competencies that helped the volunteer aid workers and survivors in Indonesia after the tsunami can help us on the job and in our personal lives to deal with difficult people, situations, or decisions. We all know complainers. At one time or another, we've all been one. When we get locked into our own complaining shadow (i.e., become "prisoners of our thoughts") and focus on all the bad stuff, we immediately lose sight of the good stuff. When we can learn to "dereflect"--that is, shift our focus of attention--from what is bothering us to a more positive target, we get a different insight into solving the problem or challenge before us.

So, how about you? How resilient are you? Think of a time when you've been able to "dereflect" the reality in your life and see a more positive side to it all. Recall a situation in your work or personal life from which you felt the need to shift your attention in order to deal with it effectively. Consider situations like:
--you were faced with a critical business or family decision
--you were thrust into an emergency situation requiring swift action
--you found yourself in the middle of a personal crisis


Note: If you missed the first five principles, you may find it helpful to (re)view them and, of course, I welcome your thoughts, questions, and experiences on any topic:

Principle 1: Exercise the freedom to choose your attitude
Principle 2: Realize your will to meaning
Principle 3: Detect the meaning of life's moments
Principle 4: Don't work against yourself
Principle 5: Look at yourself from a distance

And for more about the concept and technique of dereflection, including practical applications, see Chapter 9, "Shift Your Focus of Attention," in my book, Prisoners of Our Thoughts.