In response to Spain's increasingly restrictive legislation limiting access to abortion in the country, a group of art activists known for their bold, disruptive flair are taking action.

The members of Luzinterruptus created "Rights to Trample On," a radical art installation comprised of half-inflated sex dolls strewn about the streets in front of the Ministry of Justice in Madrid this month. The dolls, placed on the pavement like "a carpet of bodies ready to be trampled upon," are equipped with glowing lights and pieces of stark, black tape across their mouths, amounting to a stirring public image. 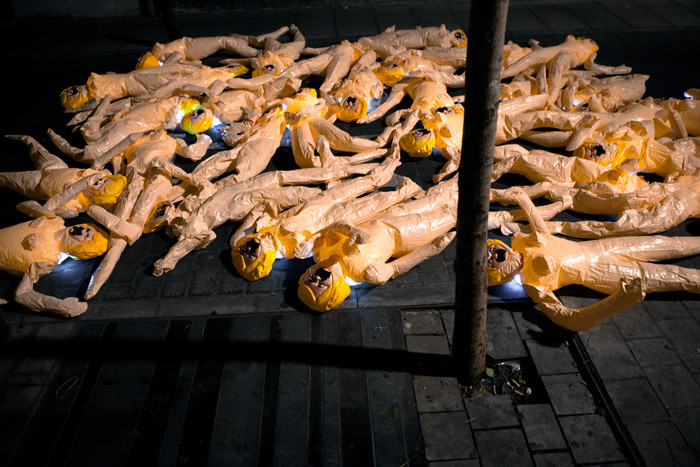 The work is meant to shine light on the oppressive decision-making practices of Spain's politicians and legislators, particularly the controversial anti-abortion bill that advanced after a secret vote in Parliament last month. The law would make abortion illegal except in the case of rape or grave threat to health in connection with the pregnancy. Femen, the women's rights group prone to topless activism, has already protested an anti-abortion rally, voicing their disproval of the proposed law.

"In Spain it seems that the social rights acquired during many years of democracy are in danger of extinction," the Madrid-based art collective Luzinterruptus wrote on their website. "These rights considered to be basic by the citizens of evolved societies, which we desire to be like, are now being diminished and if we are not careful, will eventually disappear." 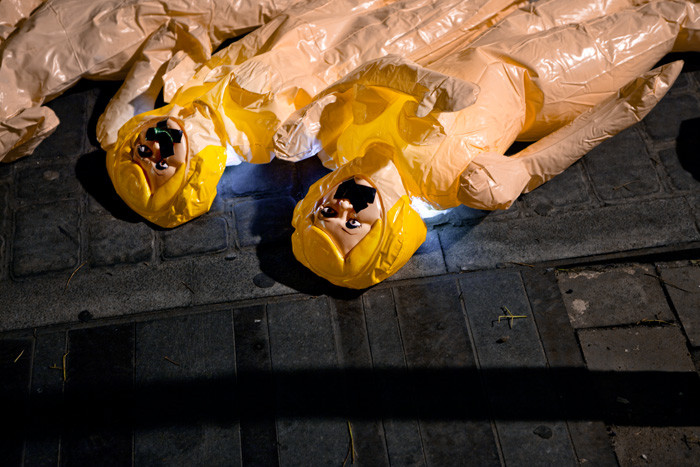 "This new law, which has already been approved in congress, prohibits the voluntary interruption of pregnancy, except in very extreme cases of danger to life and converts the woman who decides to have one into a criminal," the group adds, "making money the first consideration in the decision and making it so that only those who can pay for it have access to this treatment."

According to the statement, the project took Luzinterruptus four hours to complete and was exhibited for approximately two hours total. The group made sure to clean up their demonstration, leaving no plastic behind, and now is offering a plethora of blow-up dolls to any interested parties. (A cheeky message on their site prompts those interested in "adopting" the dolls to contact the collective here.)

Check out images of the sex doll extravaganza below and let us know your thoughts on the bit of art activism in the comments.