A few months ago I received a Fine Arts departmental email concerning the curriculum for the Fall semester. From prior experience I sensed this missive was not a harbinger of good tidings, and my suspicions were soon confirmed. The changes occurring in the department were in response to student desires and enrollment issues. Seniors felt too constrained, my Chair told me, and we both commiserated on how difficult it is to tell them they can't just do whatever it is they feel like doing. "I've decided to cancel your class," she said, "so come up with an elective you'd like to teach." 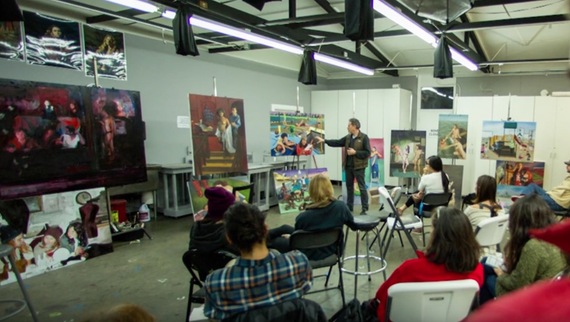 The cancelled class, Group Figure Composition, was my baby! With all of my accumulated wisdom packed into two intense back-to-back semesters, Group Comp was the culmination of twenty years experience teaching advanced figure painting. In this course juniors and seniors constructed complex figurative arrangements, an endeavor that I feel is the greatest challenge a painter can face. Previous centuries deemed narratives involving multiple figures, called History Paintings, to sit above portraiture, landscape, and still-life painting because it involves all those things and so much more. It's damn difficult to pull it off convincingly.

Perhaps too difficult and too arcane. I knew that some of my students preferred to focus their senior thesis work on landscape, still-life, or even the ubiquitous seascapes found in many local galleries. A few wanted to follow Lowbrow themes, or paint abstractly. I assumed that the compositional, technical and content lessons in my figurative class would be broadly useful in their future careers, but when I broached the subject with a colleague also teaching the current crop of seniors, he looked down at his phone. "They see this," he said, scrolling with his finger, "and they wonder why they can't focus on this kind of art." 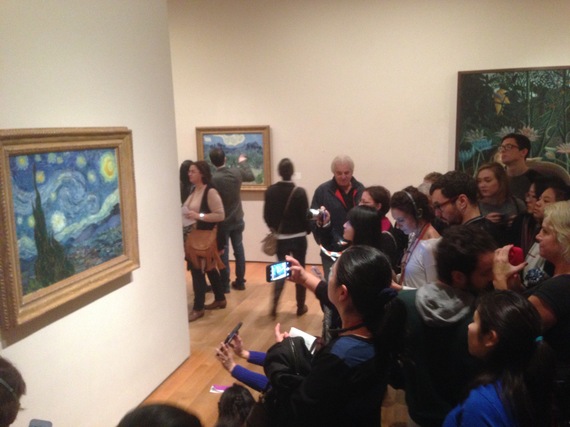 Damn Instagram! During every break in my class the phones come out. Even my best figure painters are hooked to their Instagram feed like addicts to opium. The social media giant is built upon the premise that images visually communicate and (with minimal text) are thus universally appreciated. It has attracted millions of users, who coalesce into massive communities appreciating similar interests. Artists have found Instagram to be particularly useful in sharing their artwork, so it is no wonder that my painting students find it mesmerizing.

After my Group Figure class was cancelled I went through the five stages of grief. I was in shock the first day. This was my best class! I'd honed my lectures to critical mass. My assignments whirred like clockwork. How could this be?

The next day I was angry as hell. This was important information I was disseminating, linking what my students were painting to the greatest art of the last 3,000 years of Western civilization. And it just gets cut?! Excuse me?!

And then I thought maybe I could bargain with my Chair, get the class reinstated. But liberal arts departments across the country are now competing for a shrinking number of students. I couldn't really argue with the department head who has an impossible job and has to be flexible in the face of student desires. The Chair has to fill those seats.

So I spent a couple of days depressed. My college is one of the few schools in the country where the entire Fine Arts faculty is really good at teaching figurative art. If not here, I thought, then where? Maybe I was too old, and in the age of smart phones the kind of art I felt was of import for human beings was no longer relevant? Certainly the greater artworld had been saying that on and off for my forty-year career. Maybe the Internet had finally killed painting? 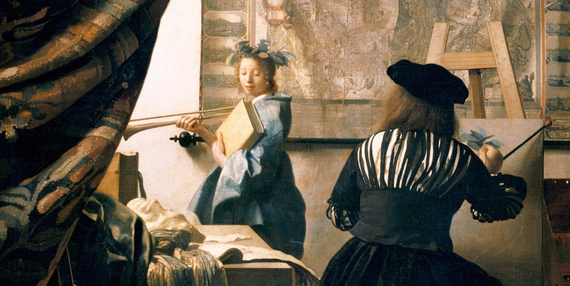 After the doldrums came acceptance. I'd been invited to come up with an elective course that I'd like to teach, right? What should it be? On my right shoulder sat Vermeer's angelic Allegory of Painting. Shifting her horn, she demurely suggested I offer Group Figure Composition under a new name. "It was popular enough to draw a few students," she sighed. But thinking of running my old class again suddenly felt safe and dull.

My left shoulder ached with the dimply weight of Kim Kardashian attired in shiny red latex. She lazily caressed my earlobe. "Why don't you just give them what they want," she cooed softly. "Call it Making Art in the Internet Age. You'll crush it, Baby!"

I laughed for a good five minutes. The proposition was absurd. But the more I turned it over in my head, the more intrigued I became with the batshit crazy idea of me running this Internet class. At sixty-one I couldn't even pretend to be the smartest guy in the room. These youngsters grew up breathing computer code. It would have to be a mix of studio class and seminar, where we all learned the mysteries of art on social media from each other. We'd post once a day... no twice! And one of those pieces would have to be new. Every day, seven days a week, for fifteen weeks! Of course grading would have to be by the cumulative number of "likes" each student receives. That's a no brainer.

With trembling fingers I wrote up my proposal, and it was passed by the faculty senate. My elective is on the books for the Fall 2016 semester! It will be an awesome class, and I will regularly blog my experience teaching it here on Huffington Post. You'll observe the progress of the class, and be able to follow my students' on social media. And I'll need your help, dear reader... I've sworn to make them all Instagram stars before Winter break. 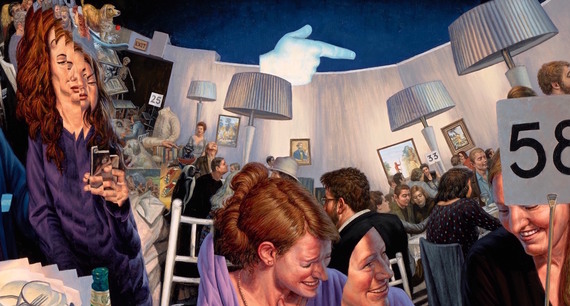