Sometimes, when you're interviewing an actor in support of his new movie -- in this case, the English actor Matthew Goode of "Stoker" -- all you want to do is sneak in a question about a past project. The project I wanted to talk about was "Watchmen," in which Goode played the villain Ozymandias. Sometimes, no matter how much you like the current project (and I do like it) you just can't wait to get to that question about the past. But then the actor decides he wants to talk about gun control -- which is much more interesting than your question about the past. And, it's hard to blame him, since the stylized violence of his current movie has already prompted more than a few conversations about the issue. I may not have asked about gun control, but, boy, Matthew Goode was ready to talk about gun control. (And, yes, eventually we did talk about "Watchmen," and he's quite aware he wasn't a fan favorite.)

In "Stoker," the first English-language film from Korean director Park Chan-wook ("Oldboy"), Goode plays Charlie, whose brother has just died in a tragic car accident. Charlie moves in with his brother's daughter, India (Mia Wasikowska), and widow, Evelyn (Nicole Kidman), and before you even start thinking, I bet Charlie is up to no good, he is up to no good. This is never intended to be a secret. Here, Goode, who is about as straight as a shooter as they come, talks about "Stoker," "Watchmen," and ... well, yes, mostly guns. He really wanted to talk about guns. (In a much more surprising way than you might expect.)

I keep calling this movie "Stroker." And I'm afraid it has something to do with the Burt Reynolds movie "Stroker Ace."
You know, I never saw that film.

Or, maybe that's a "Stroker Ace" reference.
Yeah ... I think it was more sexual punnery.

Is it hard to play creepy? You seem like a charming enough man.
I said to someone else earlier on that it's a bit like the process of making a good suit. You go and have a fitting and then you try stuff on for size, you go back in, tweak something else. Then, finally, you step on set and you have a fully made suit.

The suit reference is interesting, because we see that full suit pretty early in this movie.
Yeah, it's not a "who done it?" People are like, "Well, it's kind of a bad Hitchcock film," and you're like, "Well, no it's not, actually." I mean, the Hitchcock thing is there, but if it's a "who done it?" it's a badly made one. People are like, "You should have been hiding it a bit more." He's a sociopath, you know? He's not hiding anything!

There was never a time when I thought, Oh, this guy seems nice.
No. Not at all. He's odd. He certainly charming, as well, at the same time. But he's a very lonely man.

Park Chan-wook spoke Korean on set. Did that ever cause problems?
No. Never.

I was picturing Bill Murray from "Lost In Translation" trying to film that commercial.
[Laughs] There were no crop clips on the back of jacket. That never happened, it was very easy. He's a very peaceful man, you know. I actually found it quite therapeutic to listen to him [speak] in Korean. It's a really, really beautiful language to listen to.

You should get a recording of just him speaking and put that on at night.
I'd fall asleep like a baby.

It's interesting to see how a belt can be used for all sorts of things in this movie.
Yeah, exactly! Particularly when you have all of these arguments about the NRA and the gun laws. If someone wants to do something, they can do it with any implement, really.

What do you mean by that?
There's talk about, obviously, gun crime and guns and it's the movies that are affecting that kind of thing. And this just proves that if somebody wants to do something enough, you can do it with your bare hands, or whatever.

I want to get your clarification on what you just said. Because the NRA will say, "Why ban guns when someone can just use a belt, too?"
Oh, I'm backing the NRA now?

That's why I want to make sure.
I think, really and truly, the laws are slightly skewed. Like, Canada doesn't have many weapons and they have a drastically [lower number] of murders that happen. I personally think that if you have a gun and you want to keep your gun, then why shouldn't you have a psychological test? Because I think if someone doesn't pass that profile, they really shouldn't have a hand weapon. I mean, why do you need an automatic machine gun to go hunting. I don't get hunting necessarily, but I imagine if you're into hunting: it's about being with nature and being one with nature. And it being "us against them" and outthinking them and being a fair fight. If I have one shot and I miss, they get away. That's how I think it would be fair, rather than [mimics the sound of a machine gun], you know?

I grew up in the Midwest and I have friends who hunted ...
You know, I don't judge it. It's a very much a pastime, I hear. I play golf! But some people hunt.

I have a friend that goes out with a bow and arrow and that seems a little more fair. If you miss ...
They get away. But, you know, no judgements on it. It's an unanswerable question, but I do find it fascinating, and the two sides don't seem to want to have a compromise. What is the compromise? That's the thing. They always seem very defensive -- too defensive.

They are very far apart.
They are very far apart. It's tough, you know, it's history and it's been history for a long time. Once you have something in the Constitution, you know? And it becomes this horrible thing about it's seen as a lot of people from the South. And I don't blame them for being sensitive about it, because it's sort of questioning their way of life and their integrity. It's like all Irish people being blamed because all Northern Irish people must be in the IRA. This was a crazy opinion in the 80s when bombs were going off in London and anyone Irish were seen as fucking terrorists. And it's that kind of ridiculous generalization that I think that they make a fuss about -- and quite rightly so. But it is the few who always ruin something for the masses.

This got really deep.
It's a deep point. It's away from the film -- let's talk about the film. [Laughs] We've only got two minutes left now.

Yeah, how do I segue out of this? "Hey, remember 'Watchmen'?"
Yeah, I've probably gotten myself into trouble with one or both of those factions now. "Who is this opinionated asshole ... from fucking England?"

Maybe it will get them to see "Stoker."
I hope they like what I said! I'm not coming down on either side: I think they both need to meet in the middle.

So ... what do you think of "Watchmen" all these years later?
You know, it was on the telly, I caught the end of it the other day. It was so nice. I have such nice memories flooding back of all of the actors I worked with. I haven't seen them in a long time.

I've gotten the impression that you didn't want to do that movie.
It wasn't that. I wasn't convinced that I was the right choice to play him. And there were a couple of remarks I made in a very off-hand, facetious, jokey way, "What if the fanboys don't like you?" "Well, they can all line up and ...," you know. I think we know that quote. I love literature and when I see things made into films, I worry about the casting, too. I think the fact that I was the only one out of all of the characters that Zack Snyder thought outside-the-box for: he cast it younger and different. Everyone else was pretty much bang-on -- and age bang-on as well. I was too skinny, I was 20 years ... whatever. So, that led me to kind of over-think it in some ways and give myself more of a backstory. I don't know. I think the film will age well.

It was kind of a no-win situation with that movie.
I think so. I think Zack did as honest of an interpretation -- certainly a more faithful rendition of that film than other scripts that had gone before would have done. He's the biggest fan of it -- it was such a baby for him.

I've heard complaints that he changed too much and I've heard complaints that he stuck too close to the original story.
With that particular story, you want to make it accessible to people who don't know the novel, because, obviously, there's that audience. And then you want to be as super-faithful as you can. So, you get rid of the giant squid ...

I'm not convinced the squid would have worked in a movie.
I don't think it would work. But, as you say, it was a tough situation. I love Zack -- and I'm really looking forward to "Man of Steel," to see what he does with that.

Where you really being considered for Superman? Was that real?
No. We never had a conversation. I never saw a script. But I'm thrilled they gave it to Henry, actually, because, "A," he's the right physique ...

But your name was thrown around.
Yeah, but everyone's name gets thrown around for every project at some point. The fact that's he's actually been cast as Superman before, when McG was going to make the project? And he was close to Batman -- it was his time. So, I was thrilled. I don't know Henry very well at all -- I'm just delighted for him. Which is weird when you're talking about someone that you don't know.

Oh, from the way you said that, I assumed you two were friends.
But it is his time in the sun. And it must be devastating to have a big project like that [McG's version] come along and the money goes down. It's never happened to me, but it must be horrible. So, the fact that he had to go back in -- I don't know if he had to win it or if he was offered -- but, either way, good for him.

Did it affect your performance?
I wouldn't say it affected my performance. Because, ultimately, it's still Zack's vision. He seemed pretty happy with what I did. It was his baby -- I didn't think about it on set.

But with any role like that, there's going to be a divisive audience.
Of course. Particularly now: you have Twitter and you have a lot of these sites -- they are quite faceless sites. There's quite a bit of vitriol. And it can be quite painful to read -- it makes some of the New York Times reviews look like, "They don't have anything wrong with them at all."

Matthew Goode, 'Stoker' Star, On Gun Control And Why You May Not Have Liked Him In 'Watchmen'
'Stoker' New York Premiere 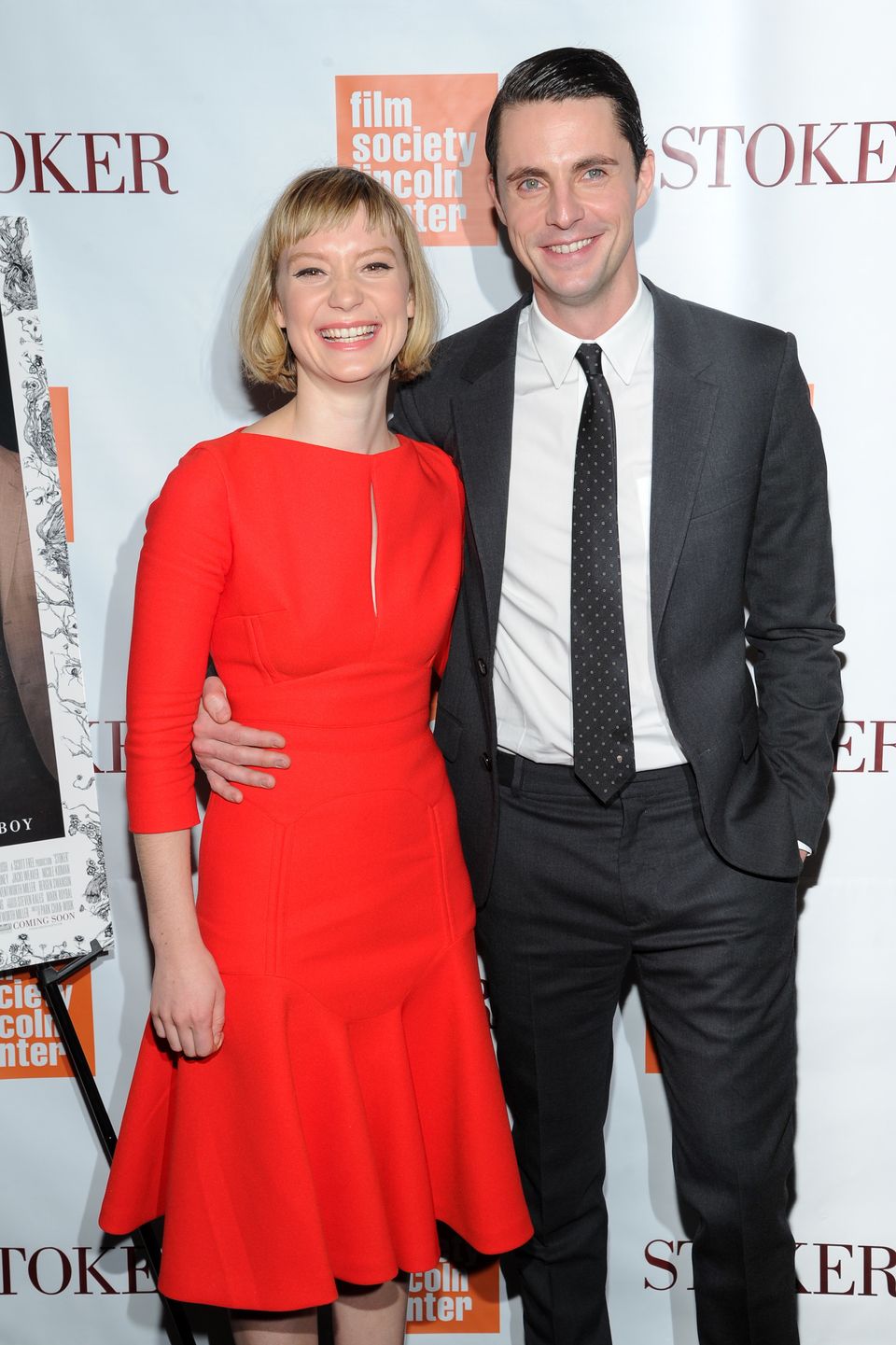