Thanks to the expected effects of climate change, there's at least an 80 percent chance of a decade-long drought occurring in the Southwest over the next century, a new study has found.

“This will be worse than anything seen during the last 2,000 years and would pose unprecedented challenges to water resources in the region,” Toby Ault, lead author of the study, said in a press release Wednesday.

Ault is part of a group of researchers from Cornell University, the University of Arizona and the U.S. Geological Survey who used computer models to estimate the likelihood that a drought lasting 10 years, 35 years or 50 years could occur in the Southwest in the next century. The study will be published in the American Meteorological Society’s Journal of Climate.

The computer models also found that California, Arizona and New Mexico will be at increased risk for drought, but that the risk could decrease for parts of Washington, Montana and Idaho. 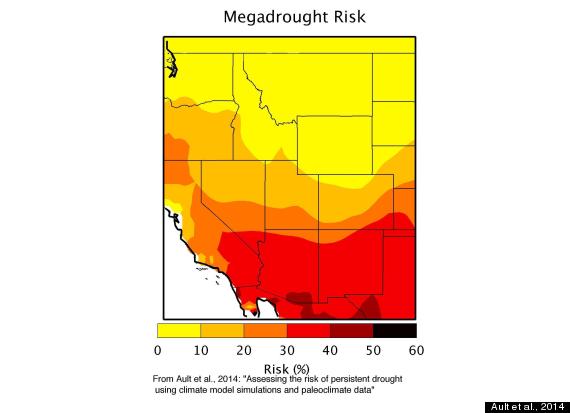 Computer models show the risk of a 35-year drought.

The U.S. Environmental Protection Agency reports that climate change is likely to limit groundwater resources, reduce river flow and reservoir levels, and increase the likelihood of wildfires in the Southwest. Combined with a rise in population, these factors will cause an increase in competition for water resources, the agency says.

California is currently in its third year of a drought. Researchers at the University of California, Davis estimate that it will cost billions and result in the loss of thousands of jobs.

In a speech earlier this summer, President Obama said that climate change was responsible for a huge wildfire in Washington state.

As for how the Southwest will deal with the increased likelihood of a long-lasting drought, Ault told HuffPost that he's "generally optimistic that we can find ways to adjust to this kind of risk because we know it is out there."

"After all," he added, "humans are incredibly adaptable creatures, and civilizations in the past have managed water with far fewer resources than we have available to us today."