Most Americans could use a raise. But southern Americans might need one the most.

The Southest and Southwest are home to a disproportionate number of workers who would benefit from raising the federal minimum wage to $10.10 an hour, according to a new report from the global poverty-fighting group Oxfam America.

Congressional Districts With The Highest Percentages Of Low-Wage Workers 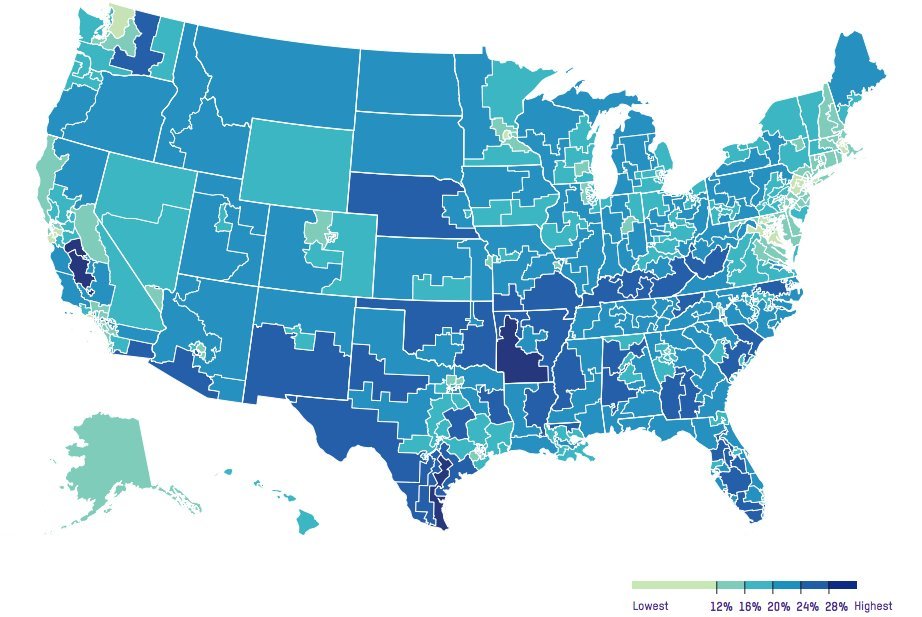 The map above, from Oxfam's report, "Working Poor In America," breaks the U.S. into congressional districts and analyzes the percentage of workers in each district who would benefit from raising the minimum wage to $10.10 from its current $7.25 an hour, as President Barack Obama has proposed. On average, 19 percent of workers fall in this category. In places like Texas's 34th congressional district, that figure is 29.9 percent -- one of many districts in the Southeast and Southwest that could use a wage boost.

Oxfam defines workers who would likely benefit from the hike as those earning between $7.00 and $11.50 per hour. Many workers who make just above minimum wage stand to gain from a higher minimum wage because employers are likely to raise wages to maintain internal pay levels, an Oxfam spokesperson told The Huffington Post.

The South is certainly not alone: In California's 40th congressional district, for example, which encompasses East Los Angeles, 31.8 percent of workers would benefit from a wage hike. Other urban districts in places like the Bronx, in New York, also have have high concentrations of workers that need the raise.

Congressional districts that include relatively wealthy urban enclaves, like Manhattan's Upper East Side, Beverly Hills and Seattle, need a minimum-wage hike the least.

In total, raising the minimum wage to $10.10 an hour would help more than 25 million workers and lift 5 to 6 million of them out of poverty, according to Oxfam. But the plan seems unlikely to pass, thanks to Republicans in Congress.

A number city and state governments have taken matters into their own hands. Earlier this month, Seattle approved the highest minimum wage in the nation, at $15 an hour. In March, Connecticut passed a bill raising the minimum wage to $10.10 an hour.