It's already known that low-income students of colorgenerally have less experienced teachers, but anew study from the Center for American Progress reveals they have less effective teachers, too.

The Center For American Progress report, released Friday, analyzed the evaluation scores of teachers in low-income and affluent districts in both Massachusetts and Louisiana.

Throughout the past few years, states have been incentivized to adopt new teacher evaluation systems through Race To The Top funding. The teacher evaluations in Massachusetts and Louisiana -- two states that are unique in making evaluation scores public -- rate teachers based on measures like student scores on standardized tests and effectiveness during classroom observation sessions.

The graphic below shows the breakdown of scores: 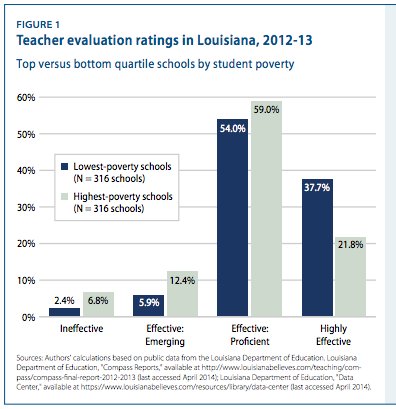 Massachusetts teachers receive ratings such as "unsatisfactory," "needs improvement," "proficient" or "exemplary." Although Massachusetts has fewer teachers with poor ratings than Louisiana, students in high-poverty schools are three times as likely to be taught by a teacher rated "unsatisfactory" than students in low-poverty schools, the report notes. See the graphic below: 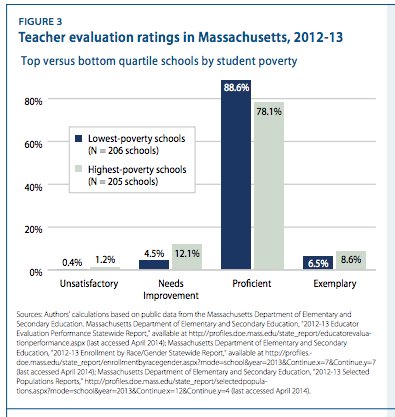 Results are similar for schools with a high concentration of minority students.

Another Center For American Progress study, also out Friday, analyzed the root causes for what is called the unequal distribution of teachers. The report noted that while No Child Left Behind previously asked states to devise plans that would ensure the equitable distribution of teachers, subsequent waivers gave states flexibility from these requirements.

“Regardless of how it is measured, teacher quality is not distributed equitably across schools and districts. Poor students and students of color are less likely to get well-qualified or high-value teachers than students from higher-income families or students who are white,” says the report.

Jenny DeMonte, associate director for education research at American Progress, told The Huffington Post that both studies indicate, “we’ve got some work to do.”

“Regardless of how you splice it or measure it, this continues to be something we need to think about. Having an effective teacher is a key driver in whether a student achieves and learns a lot,” DeMonte said.