WASHINGTON -- If Rick Santorum was hoping to use Wednesday night's televised debate to make inroads with local Republican elected officials and party activists, he fell short. That's the main finding of the latest Power Outsiders survey conducted by The Huffington Post and Patch.

When asked who did a better job at the debate, most self-identified supporters of Mitt Romney picked him, but it was Newt Gingrich -- not Santorum -- who most impressed the "non-Romney" supporters.

On Wednesday night and Thursday morning, we interviewed the Power Outsiders list of local Republican activists, party officials and officeholders to gauge their reactions to the Feb. 22 debate. We had surveyed most of these respondents before, as part of an ongoing effort to better observe the so-called "invisible primary" for endorsements, campaign cash and activist support that occurs in the weeks and months leading up to the early primaries and caucuses.

Keep in mind that the 166 respondents to this survey are not typical Republicans. Most are local elected officials, while the rest are party officers or longtime political activists. Almost half (78) live in the first three states to begin choosing Republican convention delegates: Iowa, New Hampshire and South Carolina. The remaining 88 are elected and party officials identified by Patch local editors in 16 other states (listed below).

Also, while diverse geographically, the respondents are not scientifically representative of elected or activist Republicans nationwide, or even of such party actors in areas covered by Patch sites. Nonetheless, they likely reflect the demographics and geography of communities served by Patch websites, which are suburban and most numerous in the Northeast and Midwest states.

Given these geographic and demographic patterns, our respondents may tend to offer more support for Romney than we would see from a truly representative sampling of Republican elected officials or other party actors nationwide.

Romney certainly dominates in our most recent survey. As the following table shows, he is the current choice of just over half of Power Outsider respondents (52 percent), followed by Santorum (21 percent), Gingrich (13 percent) and Ron Paul (5 percent). 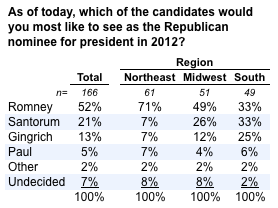 Again, the geographic skew of our sample explains some of the overall margin. Romney crushes the other candidates in the Northeast, winning more than two-thirds (71 percent) of the party actors there. He also leads Santorum by nearly 2 to 1 (49 to 26 percent) among respondents in Midwestern states. However, Romney's support falls to just one third (33 percent) of the respondents in Southern states, where a majority now prefer either Santorum (33 percent) or Gingrich (25 percent).

Most of the respondents (151 of 166) also participated in our last Power Outsiders survey just before the South Carolina primary. Among those who responded to both surveys, support for Santorum has doubled (from 11 to 22 percent) since mid January, while support for Romney has remained mostly stable. 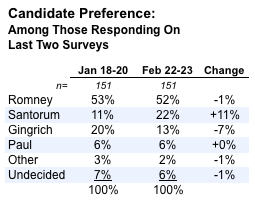 Not surprisingly, given their heavy political involvement, nearly three of four respondents to the latest survey said they watched all (40 percent) or some (34 percent) of Wednesday night's debate. Also as expected, they thought the former Massachusetts governor did the best job in the debate: 44 percent named Romney as the better performer, 28 percent named Gingrich, 15 percent named Santorum and 9 percent named Paul. Debates typically reinforce existing opinions, with partisans usually expressing support for their favorite candidates.

The more useful analysis separates results by candidate preference. In this case, we can look at our respondents' preference before the debate, as expressed in mid-January. As shown in the table below, Romney impressed three out of four (75 percent) of his supporters. But a plurality (43 percent) of the "not-Romney" respondents -- those who either picked another candidate in January or were uncertain -- gave the debate nod to Gingrich. Only one in four (26 percent) said they thought Santorum did the best job. 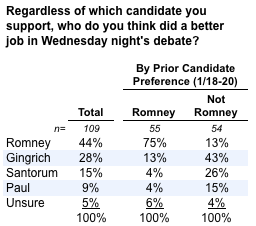 Santorum's marks are higher among the 35 respondents currently supporting him (not shown separately in the table), but even so, fewer than half of his supporters (40 percent) said he did the best job at the debate, while 26 percent named Gingrich.

We also asked debate watchers to describe the "most memorable thing" about the contest in just one word. As the word cloud below shows, no one moment from the debate stood out. The most frequent theme among the answers described the tone of the debate, with the related words "contentious," "heated," "feisty" and "combative" coming up most often (13 responses). 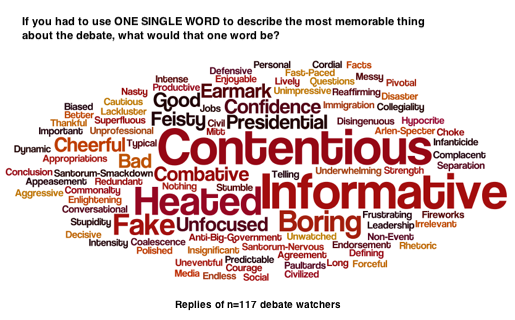 The bottom line is that local Republican insiders were not moved by Rick Santorum's performance in Wednesday night's debate, at least not enough to help counter Mitt Romney's prior advantage.

Our surveys are not a scientific random sample of any larger population but rather an effort to listen to a swath of influential local Republican activists, party leaders and elected officials in 19 states listed below. All of these individuals have agreed to participate in the surveys, although not all responded to this week's questions. Interviews were conducted between Feb. 22 and Feb. 23, 2012.