It's easy to look at Katniss Everdeen's leather outfits, her warrior stance, her bravery and her killer archery skills and think "feminist." But that -- as are most conversations about and references to feminism -- is totally missing the point. 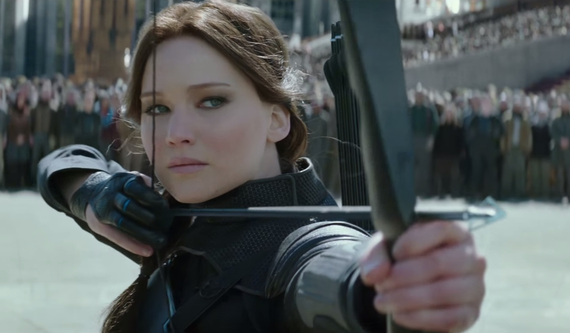 The astonishing thing about Katniss -- and her kick-ass blonde film peer, Tris Prior of the equally box-office smashing Divergent series -- is how both players boldly display long socially undervalued feminine characteristics like compassion, empathy, gentleness, availability, vulnerability and forgiveness.

They expand (no, they explode) the ubiquitous, highly masculine Western image of the hero -- the brawny, brave, take-no-prisoners, show no weakness, give-no-quarter, steely-eyed mercenary and adventurer (think Bruce Willis). This clearly gives us a different kind of role model to emulate: heroes just as effective, just as brave and physically skilled and just as inspiring.

Holy Hoodwink Batman! Whatever are we to think?

Does this mean it's now okay -- hell, even heroic -- for a female VP to express compassion for laid-off workers at a board meeting and maybe even (gasp) suggest implementing a severance package including skills retraining and relocation services?

Does this mean there's now room for the lean CEO (male or female) to stand up at a share-holders' annual meeting and announce there will be less profit in the ensuing years in order to mitigate environmental damage and curtail resource exploitation for the health of the planet and the health and wellbeing of its citizens (and their own grandchildren)?

Oh my God. See what happens when we let our heroes go soft? Where will it all end?

Next thing you know it will not only be acceptable for a woman to say to a man as the world is crumbling around them, "I know it doesn't make any sense. But you have to trust me. Please..." -- the guy will actually LISTEN to her and follow her down the (apparently) hare-brained path that definitely does NOT make sense to him at all.

Which is exactly what Tris Prior says to her (very) masculine sidekick Four at the end of the film Insurgent and what he does.

The shift in value structures and the bold display of not just such feminine values as compassion and empathy but feminine traits such as intuition is almost shocking in both the Mockingjay and the Divergent series. Yes, the heroines of these films are well balanced by a lot of daredevil bravery and highly masculine shoot-'em-up action... but that's the WHOLE POINT: BOTH the masculine AND feminine ways of being and thinking and acting and leading in the world are being portrayed as viable and acceptable and effective.

In these films men and women are no longer being limited to living out only one side of the coin of human expression -- they're valiantly striving to be more, more whole human beings -- not caricatures of femininity and masculinity.

In the Divergent books and film series, society is divided into factions -- much as we are today -- with people being slotted into narrow categories of "identity." Four's choice to wear the tattoos symbolizing each of the five factions instead of just the accepted one, plainly reveals his desire for wholeness.

"I don't want to be just one thing," he says in the first film Divergent. "I want to be brave and I want to be selfless. Intelligent and honest and kind."

Human beings want to live in a world of both and ... not either or.

We want to be secure and have money and at the same time be kind and generous. We want to be strong and vulnerable. Loving and fierce. Capable and compassionate. Intellectual and intuitive and emotional. We want to explore and evolve in healthy ways. We want to advance technologically and be sustainable.

We want to be masculine and feminine, not masculine or feminine.

And women? We don't want to be condemned to living half-lives programmed to think and work and act like men, struggling to squash out emotions and caring and intuition, fearing to display our more gentle attributes in the workplace and in relationships least we no longer be considered as "equal."

That's not being equal. That's being half human ... which may as well be the same as being inhuman. Because that's the kind of world half-humans create.

Thank God we have Tris and Katniss leading the revolution!

It really would be a major spoiler if I said this too plainly. But trust me, by the end of the latest Mockinjay film Part II, it's stunningly obvious Katniss Everdeen sure knows the difference between half-human and whole.