I first met Steve Killelea one year ago at the Harvard Club when the U.S. Peace Index (USPI) was launched. Last week, in the Japanese-themed Upper East Side home of Krishen and Geeta Mehta, I met him again -- along with his lovely wife and daughter -- far from his native Australia. Steve is a business-minded visionary who believes peace can be supported better if it is quantifiable. His life mission is to measure it.

Built upon its highly respected Global Peace Index, produced by the Australian NGO The Institute for Economics and Peace (IEP), the U.S. Peace Index was launched last year as the first in a series of national peace indices that IEP has begun to release. The aim is to further understand the types of environments that are associated with peace and its economic impacts at a more specific regional level.

"We really only study conflict, not peace," Steve told his captivated audience. This is why humanity needs to quantify peace so we can more readily achieve it. 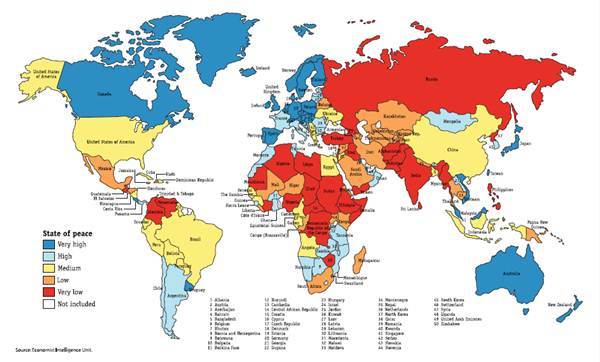 The Global Peace Index 2011 map shows that the U.S. has a "medium" state of peace. Image: GPI.

The USPI reveals many things about our nation, including that my favorite state, Maine, is America's most peaceful state. Luckily, my second favorite, New York, has seen the largest improvements in peace since the early 1990s. My other favorite states -- basically the rest of New England -- rank at the top, as does another great state, Minnesota.

I try to only accentuate the positive, but I will mention that Louisiana is the least peaceful state with Tennessee, Nevada, Florida and Alabama at the bottom. Hmm. One fact that surprised me is that peace is politically neutral -- neither Republican nor Democratic states have an advantage in obtaining the absence of violence. I won't share my acerbic thoughts on that topic as I will only annoy friends on both sides of the Aisle.

The Vision of Humanity website hosts an important collection of peace-related videos. Here, "Peace is Everybody's Business" by Camilla Schippa, Director of the Institute for Economics and Peace, founded in Sydney.

The Institute's analysis also identifies that there are hundreds of billions of dollars in economic impact to be gained from reducing violence across America. Specifically, the Institute calculates that if all the states in the U.S. had the same level of peacefulness as the most peaceful state (Maine), the total economic effect would be more than $274 billion, with the potential to generate more than 1.7 million jobs. Amazing.

These costs were also calculated at the state level. California was found to have the highest state burden of violence at more than $22 billion per year while Vermont has the lowest at $188 million. For each state taxpayer, the total economic cost of violence varies, from $7,166 per taxpayer in Washington, D.C., to $1,281 for Maine taxpayers.

Social Media Revolution, based on the number one International Best Seller "Socialnomics" by Erik Qualman.

Steve, who founded The Institute for Economics and Peace, told me:

Peace translates into dollars and cents. We have seen this in the findings of the 2011 Global Peace Index, where we found that a 25 percent reduction in global violence would free up over $2 trillion.

Michelle Breslauer is the U.S. Program Manager for the Institute for Economics and Peace on 54th Street here in New York. I sat down with Michelle recently to find out more. She told me:

As the only statistical analysis that offers a comprehensive nationwide measurement of crime and its costs, the Index illustrates the tremendous social and economic impact of violence in the U.S. We see that peace relates to opportunity and lays the foundation for individual and societal well-being.

The Index looks at a set of five indicators, including homicide rates, violent crimes, percentage of the population in jail, number of police officers and availability of small arms (per 100,000 people) to rank the states. The data used to construct the Index is drawn from the Bureau of Justice Statistics, Federal Bureau of Investigation and Centers for Disease Control. Factors such as median income and a state's political affiliation had no discernible impact on a state's level of peace.

Steve Clemons, Washington editor-at-large for The Atlantic, has commented on the Index:

For decades, many studies have looked at the issue of peacefulness; however, what we observe with the USPI is that, for the first time, we have the ability to cross reference data painting a much clearer picture of the real costs of violence in the U.S. Quantifying the cost of violence or the lack of it seems to be an important tool to help decision makers to make informed budgetary decisions when it comes to crime control. Studies like this one give us a window into our full potential as a nation, which directly impacts our ability to compete in a globalized world.

Steve's presentation last week at the Mehta residence was informative as always:

If every prisoner in the U.S. was brought together in one jail, it would rank as the fourth largest American city with a population of well over two million. With 5 percent of the world's population, the U.S. has 25 percent of the world's prisoners incarcerated, ranking America with China and Russia. Yet, as the American baby boomers age, there are fewer crimes being committed here.

Given the financial costs of incarceration, emphasis needs to be placed on programs that reduce the likelihood of reoffending or finding more cost effective ways that deal with non-violent offenders. Programs dealing with education and vocational training have been proven to be effective in reducing recidivism.

Steve founded a family foundation 18 years ago working throughout the developing world. His foundation has funded more than 100 projects in countries such as Rwanda for an average of $100,000 to $500,000 in investment.

Just as last year, nearly 200 news stories have featured the report, with the USPI covered in USA Today and featured in Time, the Atlantic Cities, The Huffington Post, MSNBC, and the Economist, among many others. Steve's daughter told me that she knew her dad was making a difference when, upon arriving in the U.S. from Australia, she saw a news report on the Peace Index in the back of a NYC cab, on taxi TV. Click here to watch a short video about the findings and here to explore interactive maps.

John Lennon would not be surprised that in this century, like all centuries gone by, people study violence more than peace. As Steve pointed out, there are few, if any, university courses anywhere in the world on the literature or economics of peace.

My grandfather was an ambulance driver on the fields of France in World War I, my father with Patton at Dachau in World War II, my brother to be drafted the week before the draft ended for Vietnam. I was an exchange student to Germany and Japan, as well as experienced 9/11 as so many New Yorkers did. The need for peace is real -- in our lifetime. Now. I commend Steve Killelea for his incredible vision and pledge, on behalf of my son, to do whatever is in my power to assist him in making this world more peaceful.