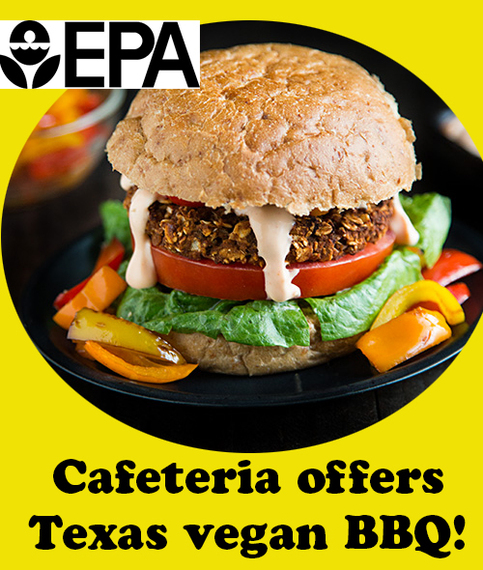 On our first Earth Day in 1970, I was burrowed in the stacks at the U.C. Berkeley agricultural library writing Diet for a Small Planet.

Never could I have imagined that on this Earth Day I'd be celebrating at the EPA, enjoying a cafeteria-featured lunch of Texas Vegan BBQ. For this girl from Fort Worth -- nicknamed "cow town" -- it felt a bit surreal.

Asked to speak in honor of Earth Day, I was delighted. I couldn't wait to share the big ah-ha's I'd been saving up during two years of writing, with Joseph Collins, World Hunger: 10 Myths, to be released in the fall.

In 1970, what triggered Diet for a Small Planet was the shock of learning that we smart Homo sapiens were actively shrinking our food supply by feeding a third of the world's grain to livestock that return to us only a small fraction of what they eat. We are creating scarcity from plenty. I was dumbfounded.

And here we are today. In the same place -- but worse, much worse.

Worldwide, livestock use three-quarters of all agricultural land but supply us with only 17 percent of our calories. Cattle are the least efficient converters of feed to food: From calories in the feed that cattle eat, we humans get only three percent in the animal flesh we eat.

Only by letting these numbers sink in, does the following comparison become believable:

Because the United States eats the most meat per capita (with one exception: Luxembourg), and uses more than half of our cropped land for feed and fuel, our agriculture feeds fewer people per acre than Chinese or Indian agriculture. What a stunner, given the widespread view of U.S agriculture as the model of efficiency.

In 1970, no one was listening to the handful of scientists warning us that we might be wrecking the climate. So of course I had no idea that our grain-fed meat diet would become not only a grain-disappearing act but a climate curse as well.

Producing a pound of lamb or beef averages from about 20 to almost 50 times greater climate impact than does producing high-protein plant foods.

Overall, livestock are responsible for at least 14.5 percent of all human-generated greenhouse gas emissions, reports the UN's Food and Agricultural Organization -- not only in their raising, but also via transport, processing, refrigeration, and more. That's as much as the transportation sector.

And, while climate change makes water more and more precious, livestock are huge water guzzlers. In drought-plagued California, for example, meat and dairy account for almost half of the entire state's water footprint. A fifth of its irrigation water goes to a single feed crop, alfalfa. So even as water scarcity worsens, every year 100 billion gallons of California water in the form of alfalfa go to China for meat production there.

From Curse to Climate Cure

At the same, transforming the way we farm and eat can be a key part of the climate cure. And the especially good news?

This change directly engages and benefits some of the world's poorest people -- smallholders in the Global South and their families who produce most of the world's food. Organic farming per unit of land releases just a third as much carbon dioxide as industrial farming. And small producers, learning ecological farming -- and freeing themselves from costly chemical inputs -- find their net incomes improving.

Not only does agroecology mean fewer emissions, it is also a big plus for sequestering carbon. One study of the EU found that, if agroecology spread, it would have the technical potential to sequester 37 percent of the EU's greenhouse gas emissions. Most of that contribution to storing carbon would come from agroforestry -- the mixing of trees and crops, which can enhance productivity as well.

It's already happening in West Africa. In one of the world's poorest countries, Niger, farmers nurturing trees in their fields have "regreened" 12.5 million acres with 200 million trees. The result is both more carbon sequestered and food security for about 2.5 million people.

For so many reasons, profound policy changes are in order to support ecological farming of the Niger variety, and to encourage climate-friendly, plant-centered diets. And take note, if Americans ate even the recommended amount of fruits and vegetables, we'd save ourselves in medical costs alone $17 billion yearly, the Union of Concerned Scientists reports.

I've been eating "with the Earth" since 1970. I love it. True, my eating habits won't change the world. But long ago I discovered something. They change me. The more I align with the Earth, the stronger and more convincing I feel I become.

So on Earth Day 2015, that vegan burger tastes really good.