NASA astronaut Michael Massimino has logged over 30 hours of spacewalking during two missions on the space shuttle to service the Hubble Space Telescope. He has performed four spacewalks, the longest of which was around eight hours. I was lucky enough to get to talk to him about Gravity, a new movie starring Sandra Bullock and George Clooney about two astronauts and a spacewalk gone badly. Being a true blue New Yorker, Massimino added a flare to the interview one would not expect from a guy with a list of degrees as long as his arm, including a PhD in mechanical engineering from MIT. If there was ever an astronaut I would love to hang out with at a bar having a great time listening to stories about his adventures in space, this is the guy. 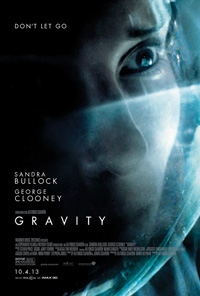 Rojas: What was it like when you first got out of the spacecraft?

Massimino: When you are inside the space craft you look through the window and you can see space. It is kind of like you are in an aquarium, "oh, look at the pretty fish." When you go outside, and you are in your own spacesuit, it is now like you are kind of like a scuba diver. You are interacting with the environment. You are a part of it. I felt like a real spaceman, and the view is... The thing is you are prepared to do your job, but you are not prepared for the view around you. You know, what you see around you is just so magnificent it just kind of blows your mind, and the view of the Earth is just incredible.

I felt like I was looking into paradise. It is the most beautiful thing I have ever seen, and the stars are incredible. There is no twinkle twinkle little star, because you are above the atmosphere. The reason we have the stars twinkle at night is because the light is being kind of blurred by the atmosphere around the Earth. That is why the Hubble Space Telescope is so good, because it is above the atmosphere. So it is kind of like looking at the sun from the bottom of a swimming pool, versus looking at the sun above the swimming pool. You are above that layer, so all of the stars, they don't twinkle. They are perfect points of light.

You can see the gas clouds and nebula from our own Milky Way galaxy. You can see the stars, the planets... the moon looks three dimensional like a ball. You know on Earth, to me, it looks more like a disk. The moon looks like it is another planet. It is like the coolest lookin' thing.

So, being outside during the space walk, the view of the Earth is just spectacular, and getting a chance to do that is just unbelievable, everything about it. You are going around the Earth at 17,500 miles an hour, so you have 45 minutes of sunlight followed by 45 minutes of darkness. You do a lap every 90 minutes. You get 16 sunrises and 16 sunsets, but when you are outside spacewalking, the light from the sun is like a pure white light. It's the brightest thing I have ever seen. It is beyond bright, it is just like purity, and the darkness is the darkest black I have ever experienced.

M: It is unbelievable. It is so frickin' cool.

R: This movie is a thriller, and I think it highlights some of the danger that people don't realize is out there.

One of the things with Hubble, we are at a higher altitude where there is more debris. Once we finished our work on the telescope, we lowered our orbit almost immediately to get to a safer place in space where there wasn't as much debris. The telescope, when you look at it, on one of its big antennae dishes there's a hole about the size of a silver dollar that a rock went through.

R: Debris can be tiny pieces so small and so fast you wouldn't even see that, right?

M: Right, and that's the thing. You are traveling at 17,500 miles an hour. That other thing, if it is going about the same speed in the opposite direction, that's pretty fast. That's a pretty big impact, so something even really small can do a lot of damage.

R: Being scientists and astronauts, you guys know the risks and the potential risks more than people outside of the space program, yet you go do it. What motivates you to take these great risks?

M: I think for me, the astronaut job was a dream come true. It was something I thought about as a little kid, and then the dream kind of went dormant when I was in high school and college, and then it got rekindled watching a movie. This is why I say these movies are great. I think that some little kids are gonna see Sandra Bullock and George Clooney as astronauts and get inspired.

I saw this movie The Right Stuff when I was in college and it really rekindled my interest in being an astronaut. I started taking those steps, and then I realized it would be the chance of a lifetime. It would be a dream life, not just a job, but the whole life.

Everyone should feel that way about what they do. They should do it because they absolutely love it, and if there is risk involved, so be it. I think most astronauts are not risk takers. We take calculated risks for something that we think is worthwhile.

R: It is difficult to measure the incredible effect that the Hubble Telescope has had on the world. I think the images have changed us all and our understanding of science.

M: Yeah, you don't have to be a scientist. I think that is why the Hubble is so popular, and astronomy is popular, because everyone can relate to it. Maybe not everyone can understand the principles of modern chemistry, but everyone can look up to the sky and say, "Wow, look at that!" You know? On a clear night how amazing it looks. You see those images of Hubble. Hubble takes us where we can't go. It takes us way out to the edge of the universe, and the beauty and the mysteries are being unlocked.

R: The movie presents what a daunting task it is to go out there and the possible consequences, so the movie kind of highlights just how heroic these efforts are.

M: I think that is a good way to look at it. Again, it is not just the astronauts, but it is everyone involved with the space program. We have a lot of people. I knew the guys in the control center, all of the guys looking out for us. It's a big team, it's a big family and there is a lot of heroism in there, it's not just the [astronauts]. In fact, in some ways we have the easy job. We get to go. It is the other people looking out after us.

M: I don't really know her that well, but I met her at this press junket last week, and I was standing around in a blue flight suit and we know who she is of course. Even I know who she is. I mean, I don't know a lot of actors and actresses. I've embarrassed myself and my family many times by not knowing who the hell it is I am talking to. You know what I mean? That is another interview you might want to do with me at one time. Stupid stuff said by dad.

She came right up to me and says, "Hi, we haven't met. I am Sandy." Just like that, and we started talking a little bit about the movie and the spacesuits and this and that. It was very brief because she was busy doing stuff, but she made a very good impression, and she seemed very, very warm. A lot of times people ask me, "How do you become an astronaut? What's important?" It is not only -- and my case is a good example -- it is not only the smartest people. Although, I am not saying Sandra Bullock isn't smart, I am sure she is very bright.

It is not the smartest people, and it is not the best looking. A lot of times it is the people that can get along with other people, and work as a team, and she just struck me as the kind of person you would enjoy being around, because she was very pleasant and easy to talk to, and I think that is a good quality for an astronaut to have.

George Clooney I have never met, but I am trying to start the rumor that he based his character on me. He is a pretty damn cool astronaut.

Read more of the interview at OpenMinds.tv.