Israeli Prime Minister Benjamin Netanyahu warned in a controversial speech before the U.S. Congress on Tuesday that international negotiations over Iran's nuclear program could imperil Israeli and international security.

In an address crammed with puns, platitudes and references to "Persians" (a historic name for Iranians), Netanyahu outlined the dangers of a nuclear-armed Iran, a subject that has preoccupied the Israeli leader for decades.

While Netanyahu spoke in Washington, D.C., U.S. Secretary of State John Kerry was meeting in Switzerland with his Iranian counterpart in the latest round of talks between Iran and six world powers known as the P5+1 -- the U.S., Russia, China, the United Kingdom, France and Germany. They have set a late March deadline to reach an outline agreement that would restrict Iran's nuclear activity in exchange for a gradual easing of economic sanctions.

Netanyahu's speeches are notorious for rhetorical panache, flawless English, and even cartoon illustrations. Looking beyond his style, The WorldPost decided to check out the substance and fact check a few of the claims Netanyahu made in his speech:

“Iran's founding document pledges death, tyranny and the pursuit of jihad. And as states are collapsing across the Middle East, Iran is charging into the void to do just that.

Iran's goons in Gaza, its lackeys in Lebanon, its revolutionary guards on the Golan Heights are clutching Israel with three tentacles of terror. Backed by Iran, [Bashar] Assad is slaughtering Syrians.
Backed by Iran, Shiite militias are rampaging through Iraq.”

Iran has acknowledged aiding Shiite militias in Iraq, as well as the Iraqi army. And these militias have been accused by international human rights groups of appalling violence against civilians.

But the militias are -- for better or worse -- propping up Iraq's beleaguered military in its fight against the Islamic State militant group. Iran claims to seek stability, not chaos, in its neighbor, and the Iraqi government says Iran's assistance to its military has been invaluable in staving off the militants' advance. The U.S. has even tacitly accepted Iran’s role in helping Iraq fight the Islamic State.

2. Iran is responsible for thousands of U.S. casualties in Iraq and Afghanistan

“Iran took dozens of Americans hostage in Tehran, murdered hundreds of American soldiers, Marines, in Beirut, and was responsible for killing and maiming thousands of American servicemen and women in Iraq and Afghanistan.”

U.S. officials say Iran has supported insurgent groups fighting against American troops in Iraq and Afghanistan over the last decade. Netanyahu's claim that Iran is responsible for "thousands" of U.S. casualties echoes statements by U.S. politicians, including a recent address by Republican Sen. Tom Cotton (Ark.). It is not clear what data this is based on, but it's broad enough to likely be accurate.

Nearly 7,000 American troops were killed and hundreds of thousands injured in the conflicts in Iraq and Afghanistan. Estimates vary as to how much of this violence can be attributed to Iranian-backed fighters, but the U.S. ambassador to Iraq said in 2010 that Iran-backed groups were responsible for about one-quarter of American deaths in the conflict up to that point.

3. Iran and the Islamic State militant group only disagree over who's in charge

Iran and ISIS disagree on much, much more. The basics: Iran’s official religion is the Shiite denomination of Islam; ISIS brands Shiites as apostates and targets for slaughter. Iran’s post-revolution regime blends theocracy with some (flawed) democratic elections; ISIS brands democracy as "deviant."

Comparing ISIS and Iran at all is problematic and potentially misleading. Their leadership may share one thing -- identifying with the second-largest faith group in the world. Yet, Iran is a nation of over 80 million people, with great diversity and a long and proud history. ISIS is a militant group that only emerged in its current form in 2013 and has tens of thousands of fighters, according to CIA estimates.

4. Iran will face no restrictions at the end of a temporary nuclear deal

“The second major concession creates an even greater danger that Iran could get to the bomb by keeping the deal. Because virtually all the restrictions on Iran's nuclear program will automatically expire in about a decade.”

U.S. President Barack Obama said on Monday that one of America’s conditions for a deal is for Iran to freeze sensitive nuclear activity for at least 10 years, a timeline that Iran currently rejects. Even if a future deal did lift U.S. restrictions at the end of this time period, Iran is still subject to international restrictions on its nuclear program as a signatory of the Nuclear Non-Proliferation Treaty (which Israel is not). While Iran has repeatedly been accused of flouting these restrictions by the International Atomic Energy Agency, its nuclear program would not be unfettered.

5. The deal as proposed could allow Iran to develop nuclear weapons within weeks

“Iran's supreme leader says that openly. He says, Iran plans to have 190,000 centrifuges, not 6,000 or even the 19,000 that Iran has today, but 10 times that amount -- 190,000 centrifuges enriching uranium. With this massive capacity, Iran could make the fuel for an entire nuclear arsenal and this in a matter of weeks, once it makes that decision.

My longtime friend, John Kerry, secretary of state, confirmed last week that Iran could legitimately possess that massive centrifuge capacity when the deal expires.
Now I want you to think about that.
The foremost sponsor of global terrorism could be weeks away from having enough enriched uranium for an entire arsenal of nuclear weapons and this with full international legitimacy.”

The White House has denied that it would countenance a deal that allows Iran to progress towards nuclear weapons capacity during a decade-long freeze. In fact, the U.S. insists any deal must increase Iran's breakout capacity, or the time it would take for it to develop a bomb. U.S. National Security Advisor Susan Rice told Monday’s meeting of the American Israeli Public Affairs committee that the U.S. wants the deal to extend Iran’s current breakout window, estimated at several months, to at least one year. 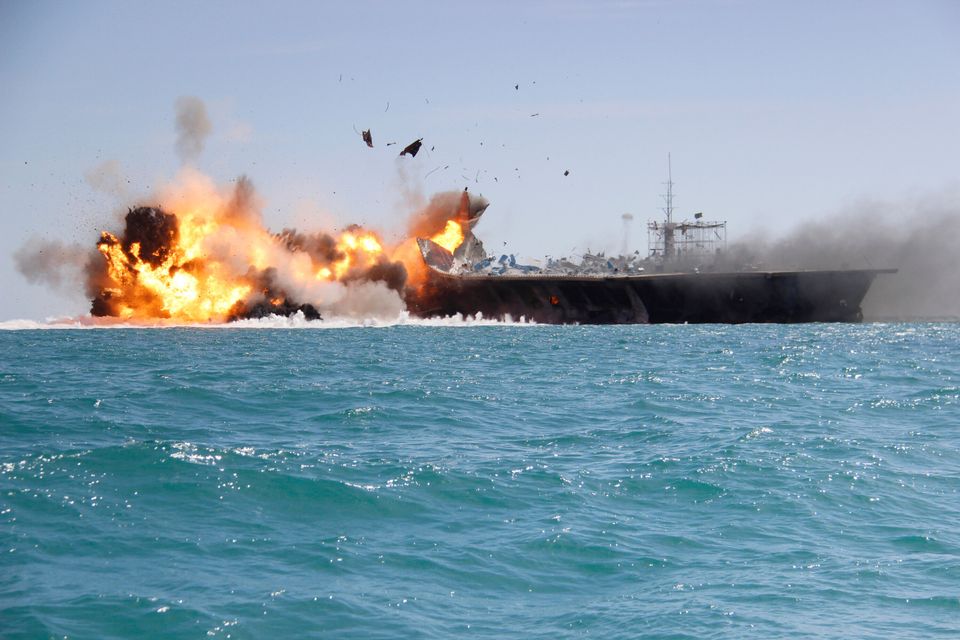