The Affordable Care Act's supporters and detractors have consistently agreed on one thing: the success or failure of the law hinges on the whether young adults, who tend to be healthier and less expensive to insure, enroll. New data released last week shows that more young people are getting health coverage, and in stunning numbers.

New U.S. Census data released last week shows that the number, and rate of young adults, who lack health insurance has fallen significantly since the Affordable Care Act became law in March 2010. An estimated 3.9 million more 18 to 34 year-olds were insured in 2013 than in 2009. 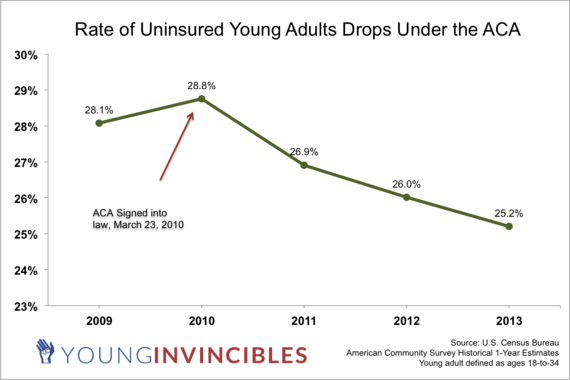 The new estimates don't even include over a million young adults who signed up for health plans on their state's Health Insurance Marketplace during Open Enrollment. That's because the Census finished collecting this set of data at the end of 2013.

Open Enrollment started on October 1, 2013, but the vast majority of young adults -- 1.7 million of the 2.2 million -- signed up on state health exchanges after January 1, 2014. That's 78 percent of enrollments that we won't be able to account for until 2014 data gets released next fall.

While we will have to wait for further data to show the Marketplace system's impact on youth insurance rates, the ACA implemented scores of systemic reforms to our health system that could account for more young adults getting covered. Systemic reforms that were in full effect, include: the provision allowing young adults to stay on a parent's health plan until the age of 26, small business tax credits that provide health insurance to small business workers, new coverage options for people with pre-existing conditions, and the elimination of lifetime limits on coverage. Here at Young Invincibles, we've known for a long time that if you give Millennials options for quality, affordable health insurance, they're going to enroll. Uninsured young adults know that they're just one accident or illness away from a medical and economic catastrophe.

In our outreach efforts across the country, many young adults say they were locked into jobs before the ACA became law -- just to have health insurance. Now that there are many affordable health plan options through the marketplace, it's no surprise that so many young people are signing up. The new U.S. Census data just scratches the surface of the ACA's positive effect on getting more Millennials insured.