Thirty miles north of New York City, nestled along the scenic banks of the Hudson River, lies the Indian Point nuclear power plant. This facility, which is owned and operated by the Entergy Corporation, is located in one of the nation's most densely populated areas. There are nearly 317,000 people residing within a 10-mile radius.

On January 26, 2016, Tritium-contaminated water leaked into the groundwater beneath the facility. Tritium is a naturally occurring radioactive isotope of hydrogen. The Environmental Protection Agency (EPA) has determined that the safe drinking water limits for tritium are 20,000 picocuries per liter (pCi/L). Testing done after the January 26th leak showed that the plant's groundwater contained Tritium levels of 8.1 million pCi/L. This is 405 times greater than the federally allowed drinking water levels and 65,000 percent higher than levels normally found in the facility's groundwater (approximately 12,300 pCi/L). Entergy officials said that the leak likely occurred when a wastewater drain overflowed during a maintenance exercise when workers were transferring radioactive water.

In a statement issued February 5th, Entergy insisted that the January 26th leak presented "no health or safety consequence to the public." Such optimism, however, seems unwarranted. Not only were the levels of tritium in the groundwater the highest of any ever recorded there, the aging plant has a history of radioactive leaks and safety incidents dating back more than half a century.

A History of Cover-Ups

The safety of Indian Point has long been a source of concern for both lawmakers and the surrounding community. In May of 1965, several New York members of the U.S. House of Representatives accused state officials of covering up fish kills in the Hudson River near Indian Point.

A decade later in 1976, Nuclear Regulatory Commission (NRC) project manager Robert D. Pollard, who had been on site overseeing the construction of Indian Point No. 3, resigned after only four months on the job. Pollard accused the NRC of suppressing evidence of unresolved safety problems.

Similarly in September of 1982, the chairman of a three-judge panel that was conducting safety hearings on Indian Point resigned after concluding that the NRC was not giving the opponents of nuclear power a fair chance to state their case.

Indian Point has long struggled to adequately develop emergency evacuation plans in the event of a nuclear accident. Following the nuclear meltdown at the Three Mile Island power plant in Pennsylvania on March 28, 1979, then director of the NRC's Office of State Programs, Robert Ryan, testified before a Presidential Commission that the decision to construct the Indian Point reactors in an area as densely populated as the lower Hudson Valley was "insane."

In 1981, local and state officials testified that there were "major flaws" in the plant's evacuation plans. A year later, the NRC threatened to shut the plant down entirely if it did not take immediate action to correct these same deficiencies.

On at least two occasions between 1982 and 1983, the Federal Emergency Management Agency (FEMA) found significant flaws with the plant's evacuation plans and concluded that in the event of a nuclear emergency, the safety of the surrounding area could not be assured.

Following the nuclear meltdown at the Three Mile Island power plant in Pennsylvania on March 28, 1979, then director of the NRC's Office of State Programs, Robert Ryan, testified before a Presidential Commission that the decision to construct the Indian Point reactors in an area as densely populated as the lower Hudson Valley was "insane."

Radioactive Leaks Have Been Occurring for Decades

In 1980, the NRC ordered the shutdown of Indian Point 2 after a 100,000-gallon water leak went unnoticed for several days. The Commission later found there was a "substantial likelihood" that the leak had been caused by the "imprudent actions" of the plant's operators. Similarly in 1981, Indian Point 3 was shut down after a malfunction in the plant's steam turbine section. In 1982, another leak caused it to be shut down for over a year.

Riverkeeper, an environmental watchdog based in Ossining, New York, has documented numerous safety violations that have occurred at the plant since the 1980s. According to their website, "decades of accidental radioactive leaks and spills at the Indian Point nuclear power plant have resulted in two extensive plumes of contamination in the groundwater beneath the plant, which leach to the Hudson River."

A brief look at a timeline of these incidents causes a disturbing picture to emerge, as the chart below indicates: 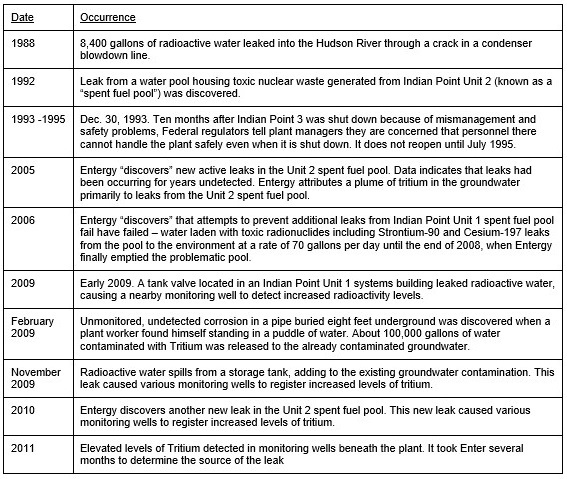 Simply stated, the Indian Point power plant must be shut down. Its long history of failed containment procedures, an ongoing inability to develop viable evacuation plans, and repeated instances of apparent cover-ups by regulators is frightening and unacceptable. These things only serve to fuel suspicions of a rigged-system that is aimed at lining the pockets of politicians and their corporate donors at the expense of the community. It leaves us with the feeling that government and industry officials are no longer proof against the environmental and health risks surrounding the use of nuclear power. The recent crisis in Flint, Michigan, provides a stark example of this.

Elected officials owe a duty of transparency and accountability to the people they serve. This duty extends to powerful energy conglomerates, like Entergy, whose only real concern is placating shareholders and increasing profit margins. The public should feel confident that regulators are doing everything in their power to ensure its safety. They are the last and only line of defense.

At a time when safer, cleaner, and more efficient methods of energy production are readily available, the risk of even a single radioactive leak is no longer acceptable quid pro quo for the so-called 'benefits' of nuclear power.