The New York Times: "Apple is using all kinds of trickery and loopholes to avoid paying taxes in America!"
America: "We don't care! When's the iPhone 5 coming out???"

This is, essentially, the story from YouGov, an opinion-tracking firm which published survey results on Monday showing that public perception of Apple was unchanged following the New York Times' bombshell story about Apple's iffy corporate tax practices. The article -- provocatively titled "How Apple Sidesteps Billions In Taxes" -- lays out the labyrinthine ways in which Apple diverts its revenues to states and nations with favorable tax policies, so that the company can minimize the amount of taxes it has to pay each year.

Though Apple isn't doing anything illegal, and though many other large American corporations do the same, the widely-read Times article ignited a controversy over Apple's tax strategy and American tax policy; even U.S. Senator Tom Coburn (R-OK) weighed in, declaring that he was "absolutely livid" about the whole situation in an interview on MSNBC.

And yet: Do you know who is not "absolutely livid," or even a little bit livid over this whole thing? Americans. YouGov conducts a daily poll tracking corporate perception, and it found that after the Times exposé dropped, perception of Apple actually became more, not less, positive, in the two days following, and only trailed off slightly afterwards. Compared to General Electric, which was also the subject of a harsh Times profile about its tax practices, Apple got off extremely easily, per YouGov's research:

Apple’s consumer reputation has barely budged since the Sunday April 29th New York Times story revealing that the company avoids paying taxes in its home state of California and 20 other states. On the other hand, when the same newspaper revealed GE reaped $14.2 billion in worldwide profits in 2010, yet paid zero taxes in the U.S. and claimed a tax benefit of $3.2 billion, the reaction was more pronounced and longer: the company’s reputation took a steep drop and two months to recover to pre-crisis levels.


The survey asks 5,000 Americans per day the simple question: "Would you be proud or embarrassed to work for this brand?" Negative feedback is subtracted from positive feedback until YouGov arrives at a score between -100 and 100, with 100 consisting of all positive responses and -100 consisting of all negative responses. Here you can see the perception scores of Apple and GE, as tracked by YouGov in the days following publication of New York Times articles about their respective tax avoidances: 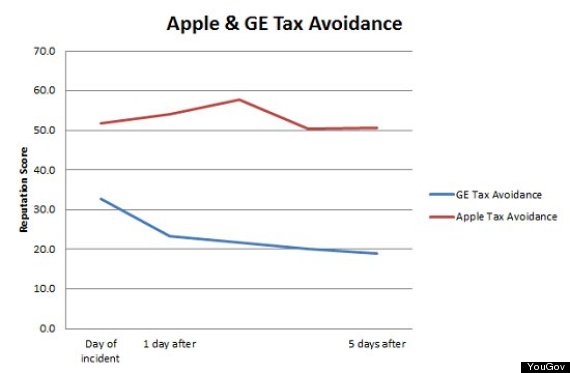 While the YouGov survey depicts an Apple Inc. emerging unscathed from a potentially harmful Times rocket launch, it does not delve into how it emerged unscathed, or what makes Apple's situation different than General Electric's (As a refresher, here's the General Electic story in question: "G.E.’s Strategies Let It Avoid Taxes Altogether"). Presumably the New York Times' reach hasn't declined in a year -- so what makes Apple a "teflon" brand?

A few thoughts: One, Apple makes beloved products that everyone wants; General Electric, for the most part, does not. Two, Apple was already much more popular and beloved than General Electric when its scandal hit; those who buy into the Apple ethos were not likely to be swayed by a tax story. Third, Apple had already been hit with a much more damaging story in the New York Times not four months ago: a bleak look at human rights abuses at the Chinese factories of one of its largest supplier, Foxconn, with the cringe-inducing headline "In China, Human Costs Are Built Into an iPad". This YouGov poll doesn't show how the inquiry into factory conditions altered people's perception of Apple, but it'd be interesting to see whether the iCompany was immune to that scrutiny, as well.

Whatever has kept Apple so bulletproof in the past few months -- from this public perception poll, to the huge sales it reported last quarter -- it appears to be working well at deflecting the shots fired by its critics. Perhaps the Cupertino company could market its iTeflon, too; we can think of several companies (and people!) who would love to come out of their various scandals and exposés as clean and unharmed as Apple apparently has.