A Gallup Poll released a day ago shows that in the last 12 years support by Americans for the use of animals in medical testing has declined, with the greatest shift occurring in younger Americans. 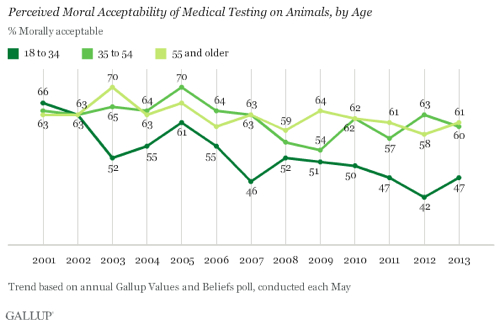 Graphic from SAEN and Gallup

According to Gallup, which measures moral attitudes on various issues, such as premarital sex and gay relations, the support for the use of animals in medical research has decreased by more than 10 percent in the past 12 years (2001-2013). Those in the 18-34 age group had the biggest decline - about 19 percent - with only 47 percent supporting animal testing, compared to 66 percent in 2001. Support dropped, but not as dramatically, for those 55 and older.

A couple of thoughts come to mind.

The first is that for at least the last 12 years, Gallup has included animal testing in the "morality" category. The second involves my daughter's generation and its ability to "evolve" with respect to their a priori knowledge about animal cognition and suffering.

Respondents to the Gallup survey were asked to respond to a list of issues. Regardless of whether or not they though the issue should be legalized, they were asked to indicate whether the issues were "morally right" or "morally wrong." Are younger people more open to evaluating morality? What is going on with the baby boomers, and why are we so set in our cognitive ways? Are our children evolving faster than we are?

When the press release came in today from the animal rights investigative organization, SAEN, I happened to be deep into reading an incredibly dense book, The Origins of Meaning, which examines the evolution of language. Author James R. Hurford presents mountains of evidence demonstrating that our closest relatives on the evolutionary tree, non-human primates (monkeys and apes), are very, very close to the brink of human language. Non-human primates are about to venture into the realm inhabited by philosophers, and SAEN's presser made me queasy just thinking about animals' abilities to literally read minds when they are housed in deplorable conditions in the nation's laboratories. 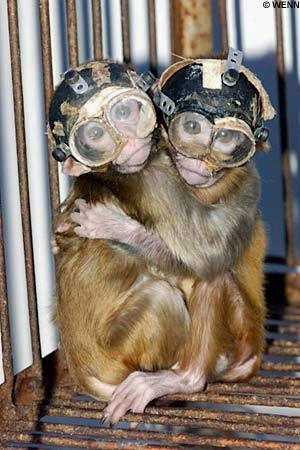 I am hoping trolls in favor of scientific research do not jump on this post as an opportunity to vent their positions on animal research. Instead, let's engage in some critical thinking.

Michael A. Budkie, A.H.T., Executive Director of SAEN, attributes the change in attitudes to "to the increasing exposure of the negligence and violations of federal law within U.S. labs." SAEN has been relentless in its exposures of medical research labs that are not following federal laws.

In fact, the Washington Post, Bloomberg, and the Boston Globe have each cited Budkie and other animal rights' groups efforts to expose conditions at Harvard.

When the Harvard Medical School announced that the New England Primate Research Center will close by 2015, citing funding issues, the Humane Society of the United States praised the decision as a step in the right direction that went far beyond issues of funding.

Harvard's decision to close the New England Primate Research Center is a significant, positive development. As an organization, we advocate for better investment of research dollars. Moving away from the use of these highly intelligent animals is another step in that right direction.

The primate center currently houses approximately 2,000 monkeys, and was previously cited for numerous Animal Welfare Act violations. Four primates died, and conditions at the lab put other research animals in danger. Complaints by animal rights' groups, including SAEN, led the U.S. Department of Agriculture to open an investigation.

So the plight of lab primates has certainly been in the news, but I doubt that most young, hip individuals turn to Bloomberg with their morning lattes in hand. Look to social media connections instead. Google "animal rights on Facebook" and get dozens of hits in every country.

All Twitter reports that "Animal Rights (are) More Important To Twitter Users Than Disaster Relief, Environment." Animals dominated all categories, including average tweets per week, average Facebook posts per week, and average weekly Twitter mentions, according to Craigconnects.

Language and the linguistic thinking process evolved over millions of years, and perhaps the news is that social media has enhanced the evolution of empathy in the young.

Unfortunately, for that older demographic, aging seems to have reduced the ability to experience changes in attitude toward animals. Studies support the hypothesis that attitude changes are greater in early adulthood and decrease as the years progress.

The Gallup Study opens the door to more questions than answers about changing moral values with respect to animals. No one wants to see Fido in the laboratory with electrodes coming out of his head, but the plight of monkeys seems to affect the young more than the old.

One wonders what would happen if lab animals could tweet.