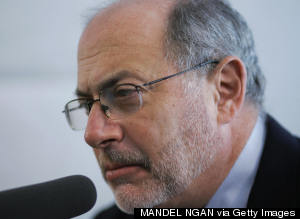 If anyone still suspects that National Public Radio has a consistently liberal bias, listen to Robert Siegel's interview with Brigid Flaherty, organizing director for the Alliance for a Greater New York, a labor advocacy group, on Wednesday's All Things Considered.

The topic was the poverty-level wages paid to bank tellers and other employees in the bottom half of the banking industry. Siegel reminded listeners that U.S. taxpayers bailed out the financial industry when many of the nation's largest banks teetered on the brink of collapse. He also pointed out that despite the taxpayer subsidies, Wall Street banks nevertheless paid their top executives huge salaries and bonuses.

Then Siegel asked Flaherty about a new study conducted by economists at the University of California at Berkeley's Labor Center on behalf of a group called the Committee for Better Banks. Flaherty explained that in New York state, one out of three bank tellers are receiving some form of public assistance -- such as food stamps and Medicaid -- because their wages are so low. Siegel asked Flaherty: "How much do, say, bank tellers in New York City make?" Flaherty responded: "So on average, they make around $11 an hour, which yearly comes out to about $14,000 a year."

"That's very tough to live with in New York City," Siegel responded. "You might be able to make ends meet, though, in some other parts of the country on that."

It is at this point that it becomes clear that Robert Siegel is totally out of touch with the realities of living in America.

A bank teller who earns $11 an hour and works full time (40 hours/week, 50 weeks/year) actually makes $22,000 a year -- considerably more than Flaherty's calculation. So let's test Siegel's hypothesis and see if $22,000 is enough to make ends meet in different parts of the country.

Fortunately, there are lots of studies documenting what it costs to live in different parts of the country. For example, a family with one parent, one pre-school child and one school-age child in Fresno County, California -- an inland area much different than the expensive San Francisco and Los Angeles coastal areas -- needs $51,865 a year to make ends meet. In rural Kern County, the "self-sufficiency" budget for that same family is $48,246. In Los Angeles County, it is $64,480. These calculations come from the Center for Community Economic Development and include bare-bones no-frills expenses for housing, food, transportation, and other essentials.

You think that California -- even its least expensive areas -- may be off the charts compared with other regions? Let's look elsewhere.

In Colorado, the amount needed to be economically self-sufficient varies from $30,089 annually in Kit Carson County to $66,607 in Pitkin County. In Maryland, the self-sufficiency budget ranges from $30,291 in Garrett County to $77,933 in Montgomery County. In Peoria County in central Illinois -- a relatively low-cost area -- that family needs $36,134 to keep a roof over their heads and make ends meet. In Arizona, they would need $38,624 in the least expensive county (La Paz) and $51,115 in Maricopa County, the state's most expensive.

According to this year's Out of Reach report, published by the National Low Income Housing Coalition, in no county in the entire country can someone who works full-time and earns $11 an hour afford a decent apartment. In fact, the study found, the typical "housing wage" in the United States -- what a family needs to make in order to afford an apartment at the HUD estimated Fair Market Rent (FMR), while spending no more than 30% of income on housing costs -- is $18.79. This figure varies in different parts of the country. But even in Mississippi, where the FMR for a two-bedroom apartment is only $697, a family must earn $27,898 annually ($13.41 an hour) to afford that rent.

In other words, Siegel could travel to any part of the United States and discover without any digging that no three-person family (working mom and two kids) earning $14,000 a year -- or even $22,000 -- can make ends meet.

In recent weeks we've been hearing a great deal about the burgeoning movement of low-wage workers, particularly those employed by Walmart and by fast-food chains like McDonalds, Wendy's and Taco Bell. Last month Demos issued a report showing just how easily Walmart could raise wages for its employees. Instead of buying its own stock to enrich the Waltons, whose wealth equals that of 42 percent of all Americans, Walmart could pay every employee $14.89, without raising prices, the report says.

Now, thanks to the UC-Berkeley study, we know that most bank tellers constitute part of the growing ranks of the nation's working poor. The person behind that thick glass window helping you deposit your check or take out some cash probably has no savings of her or his own. Unless he or she has spouse making a middle class salary, she probably doesn't have much left in her checking account at the end of the month either. And, Flaherty told Siegel, "We know that the banks have the money to pay their workers a fair wage with benefits."

Flaherty's comment should be nominated for understatement of the year.

The financial industry's reckless, risky and often illegal practices crashed the economy in 2007, leading to an epidemic of foreclosures and lay-offs -- a deep recession from which the nation has still not yet recovered. But thanks to taxpayer bailouts, the banks are doing quite well. The nation's banks made $141.3 billion in profits last year. The CEOs of banks made a median salary of about $552,000, according to SNL Financial. Last year alone, bank CEO pay jumped by 22 percent. Do you think the tellers got a raise like that?

Let's recall that it was the financial industry's combination of outrageous lending practices and outrageous salaries that led to the Occupy Wall Street movement, the growing concern about widening inequality, and the increasing media focus on the disparity between outrageous wealth of the 1 percent (especially the .01%) and the declining incomes and living standards of the 99 percent.

On its website, NPR describes Siegel as a reporter "with 40 years of experience working in radio news" with a long list of journalism awards to his name. Another bio notes that Siegel -- the son of a teacher and a secretary -- grew up in Peter Cooper Village, a huge government-subsidized housing development for middle class families in Manhattan. A few years ago, Peter Cooper Village was sold to a developer who is jacking up rents in order to turned into an upscale apartment complex. Today, even a two-parent family like Siegel's -- a teacher and a secretary -- would have a hard time finding an affordable apartment in Manhattan.

And a bank teller with two kids making $22,000? Tellers of the world unite! You have nothing to lose but spare change!

In 2011, NPR paid Siegel $369,347, according to the non-profit organization's 990 report filed with the IRS. That isn't even close to what Wall Street titans make, but it puts him comfortably in the top 1 percent (and that doesn't even include his wife's salary). Put another way, he earns at least 16 times more than the typical New York City bank teller.

His heart may be in the right place, but his offhand comment -- "You might be able to make ends meet, though, in some other parts of the country on that" -- suggests that he's woefully out of touch with the daily struggles of ordinary working people.

Most of the workers who occupy Wall Street on a daily basis can't make ends meet. But neither can their $22,000-a-year counterparts in any other part of the country. All things considered, it might do Mr. Siegel some good to get on a bus and see for himself.