December 6, 2011, was a national day of action targeting homes facing foreclosure, organized by a coalition of community groups behind the movement Occupy Our Homes. Protests were held across the country, in cities such as New York, Chicago, Philadelphia, Atlanta, San Francisco, Minneapolis, Portland, OR, and more.

Actions included "reclaiming" houses that banks are leaving vacant, and "home defense" to stop banks from foreclosing and accept payments from the homeowners, which banks like Chase and Wells Fargo are refusing to do in some cases.

Some of the groups involved in the community resistance effort include ACCE (Alliance of Californians for Community Empowerment), The New Bottom Line, ReFund California, New York Communities for Change, Occupy Wall Street, Take Back the Land, SOUL (Chicago), SEIU, and The Coffee Party.

In South Gate, CA, twenty minutes south of Los Angeles, dozens of supporters rallied around the home of Ana Casas Wilson, with several pledging to camp out in her front yard while she defies eviction, and face arrest if necessary. 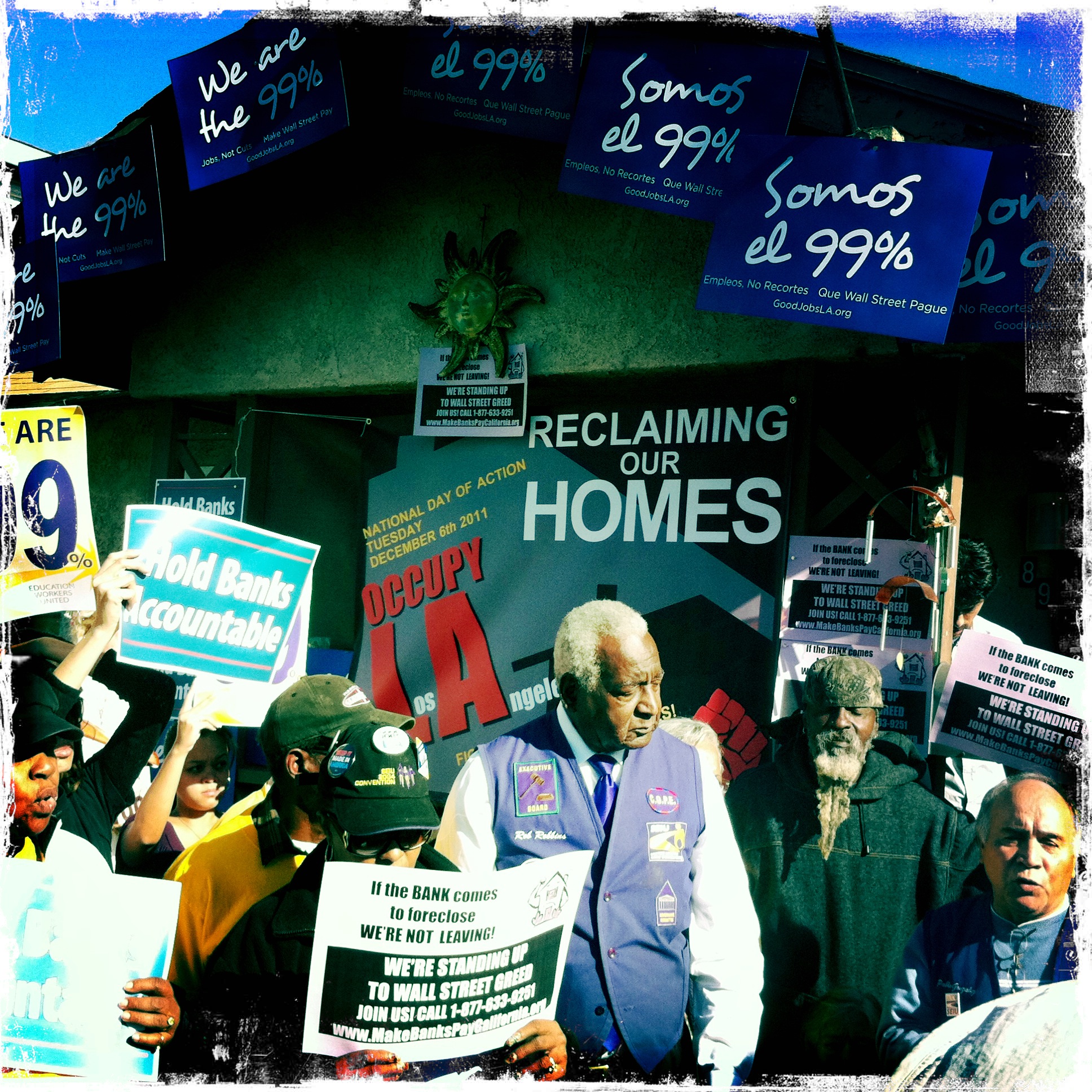 Ana shared her story with the assembled media and demonstrators: living with cerebral palsy and battling stage four breast cancer, she was stalked by loan reps assuring her they could lower her payments for the home she has lived in with her family since 1975. After relenting to get more money for her health care and refinancing in 2005, Ana eventually found that her loan was acquired by Wells Fargo, who has since refused to make any modifications or accept make up payments.

ACCE leader Lynn Motley asked the crowd to take out their phones and call the CEO of Wells Fargo, John Stumpf, and ask that he stop the eviction of Ana Casas Wilson and her family, and work to modify their loan, since they have three steady incomes in their house. An activist and advocate for other disabled Angelenos, Ana has held off the eviction order from being enforced for the time being. Now, she is not alone.

This video covering the South Gate action shows the media interest and community support for this cause, as well as the energy building from the Occupy movement.

The Occupy Our Homes actions came on the same day that the Attorney Generals of California and Nevada announced a joint investigation into bank practices that precipitated the housing crisis as well as the handling of foreclosures.

John Wellington Ennis is following the financial crisis and those that are picking up the pieces for his upcoming film PAY 2 PLAY: Democracy's High Stakes.