As a group of restless young adventure seekers, fresh off a late-night horror games marathon, it seemed like an obvious choice to go explore an abandoned old school up in the mountains off of Highway 17. We had flashlights, free time, and the urge to terrify ourselves. Truth be told, the original plan was to explore the abandoned town of Alma, California, but it proved rather difficult to locate in the dark, so we settled for the school instead.

What was there to find in a school that had remained unused for twenty years, besides rust and graffiti? I didn't know what to expect, but as we pulled into the turnoff just down the road from the school's gate, I couldn't suppress a shiver of excitement. "Lights off," Brandon said to us. "We're not really supposed to be here." A short sprint down the two-lane mountain road brought us to the gate, and we quickly hopped through and began the trek into the school. 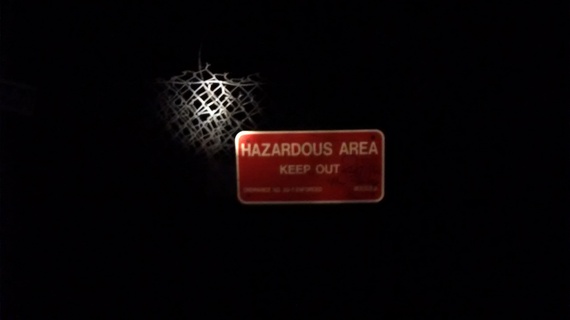 (The sign on the fence. Yep, definitely gonna ignore that.)

As we made our way towards the fence that surrounded the entire property, our flashlights glimmered on a black tarp laying 30 feet or so off the dirt path. "Are those... bodies?" someone asked. From that distance, and in that light, they looked like they very well could have been; some investigation, however, revealed it as nothing more than a tarp being held down by some rocks.

Making it past the fence was mostly uneventful, though one of us cut his leg as he climbed over, and then discouraged the rest of us from taking that route. We pulled up a section of the fence and the rest of the group crawled under. With that last obstacle behind us, we made our way into the school proper.

Fear is part of our culture here in the United States. We pay good money to watch movies and play games that scare us out of our wits; our media, to some extent, is fueled by it. What's more, exploring abandoned buildings is a classic trope of horror films - so you might expect that there would be some element of fear - something unsettling and strange about exploring a building that was now occupied only by rodents and black mold. But, to tell the truth, it really wasn't frightening. We all wanted it to be terrifying, and to some extent we pretended it was. But as we wandered slowly through the classrooms, I felt only an odd sense of wonder; this is what it looks like when you let nature take hold, I thought.

Though I'm told this property had multiple different owners and purposes throughout its life, the most recent use had clearly been a religious school. We took it upon ourselves to take the creepiest pictures we could with only our lackluster smartphone cameras; the dim light made it nearly impossible to get good shots, and I resolved to bring a decent camera along next time I went exploring somewhere like this. The bible verses on the walls made for some interesting photos; we lined our flashlights up along the counter-top and took shots of ourselves silhouetted by their light. We came here to be scared; if there was no fear to be found here, we'd make it ourselves. 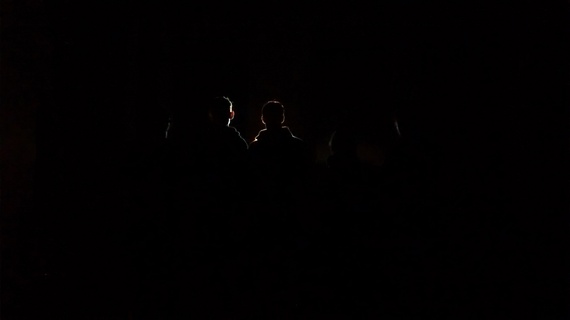 In my opinion, one of the best pictures we took there. 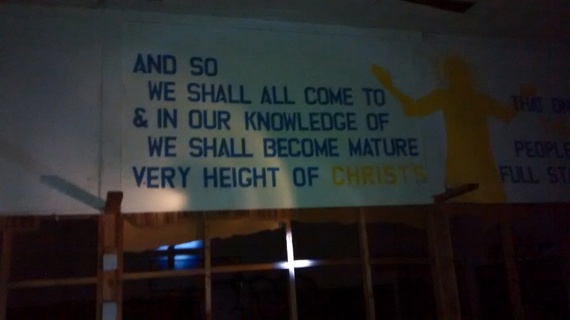 Semi-creepy bible verses on the walls.

In the next building, we found a selection of decades-old science fiction novels, and a mound of bat droppings several feet high. I'd never seen bats up close, but here there were dozens of them, winging their way around the inside of what must have been used as a church. "This is at night," Brandon remarked. "They're all out hunting. There must be thousands sleeping in here during the day."

We explored underneath the church as well; the air was thick with ammonia from all the bat droppings, and insulation was falling out of the ceiling. One window had clearly been boarded up, and then later kicked in. "If this was a zombie game, that's where the big boss zombie would bust in out of nowhere," someone remarked. Sadly, there was no boss zombie to be found; we only found what used to be a wood shop, and a bathtub filled with bat skeletons. I quickly grew sick of breathing in the thick, heavy air; Chris and I stepped out and waited until the rest of the group had gotten their kicks.

There was one more area left to explore, but as we walked there, I heard the chittering of rats and decided that exploring one last section of the school was not worth contracting rabies. As we meandered back towards the fence and the car, I contemplated what this school might have been like in the 1980's. What would its then-students think of this place now? What of this school now only exists in the memories of those who attended it?

Fear no longer serves much of a purpose to our species. Modern humans have very little to be scared of in the natural world; there are no predators that actively hunt us. Truth is, the thing that poses the greatest danger to us is each other; indeed, the only thing I was remotely worried about during this exploration was finding someone else living there. Maybe that's why we search for horror so actively - by finding terror in zombies, ghosts, demons, and the otherwise supernatural, we can distract ourselves from the fear of our fellow man.

Regardless, as we clambered back into the minivan, I was happy to be leaving.

(all photos taken by me)